Heidi Klum has found love again! The supermodel, former Project Runway host, and judge on America’s Got Talent has announced she accepted a proposal from Tom Kaulitz. Tom is a guitarist for the band Tokio Hotel, which his twin brother sings for. The German band is still active, but was probably best known in the United States in the late 2000s, when they became a fixture of the pop-punk scene. The pair have been dating for a year, but went public in the spring. Tom notably donned heavy prosthetic makeup to portray the Shrek to Heidi’s Princess Fiona during her famous Halloween party this fall. 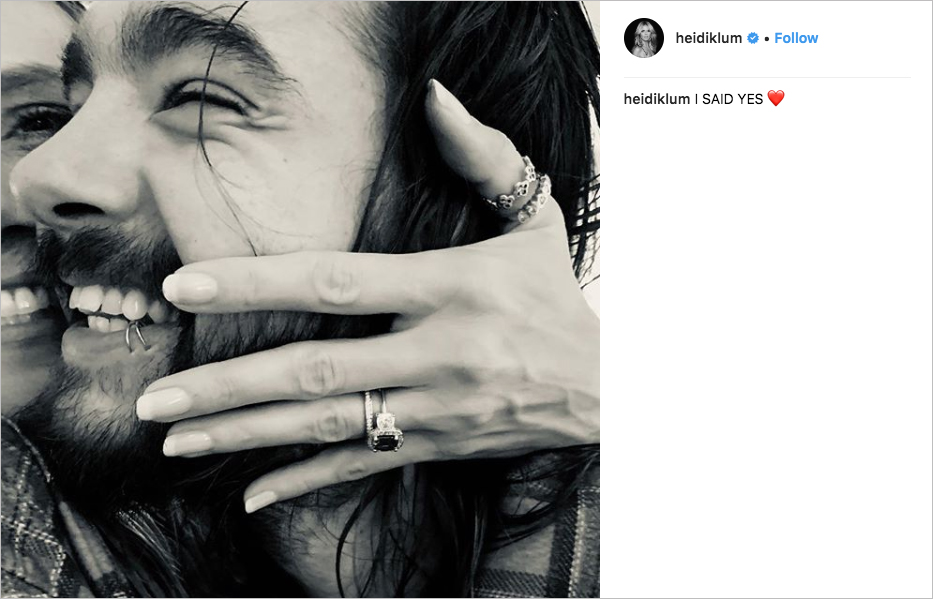 The bride-to-be posted a black-and-white photo of her hand covering Tom’s smiling face while her own grin is mostly out of frame. Because of the filter, it is hard to tell whether the center stone of the engagement ring is a black diamond, blue sapphire, or another dark-colored gemstone. It is framed by a halo, along with two smaller diamonds also set in a halo. Interestingly, the model is already wearing a pavé band with the ring, although there is no indication that the two are already married. Tom’s brother Bill shared the same photo to his own Instagram, captioning it “couldn’t be happier for my twin brother and his soon-to-be wife” along with the emojis featuring heart eyes, a red heart, a bride and a groom, and an engagement ring.

How to Elevate Your Cocktail Hour