Some say that all your guests will remember after the wedding – besides witnessing your vows, of course – is the food and the music. After all, the reception will likely be the biggest party of your life, attended by all of your friends and family from various stages of life! While a DJ and emcee can liven up the crowd, there's nothing quite like having a live band perform at your wedding. We spoke with Danny Chaimson, President and CEO of Gold Coast Events, for his advice on all things related to wedding songs, music, and entertainment. As the leader of Los Angeles-based band The Golden Coast All Stars as well as Chicago's The Gold Coast All Stars, The Chicago Players, The Lakeshore Encores, and Rush Street Rhythm, Danny is a wedding entertainment expert. Read on to learn more about him, as well as tips for your wedding music! 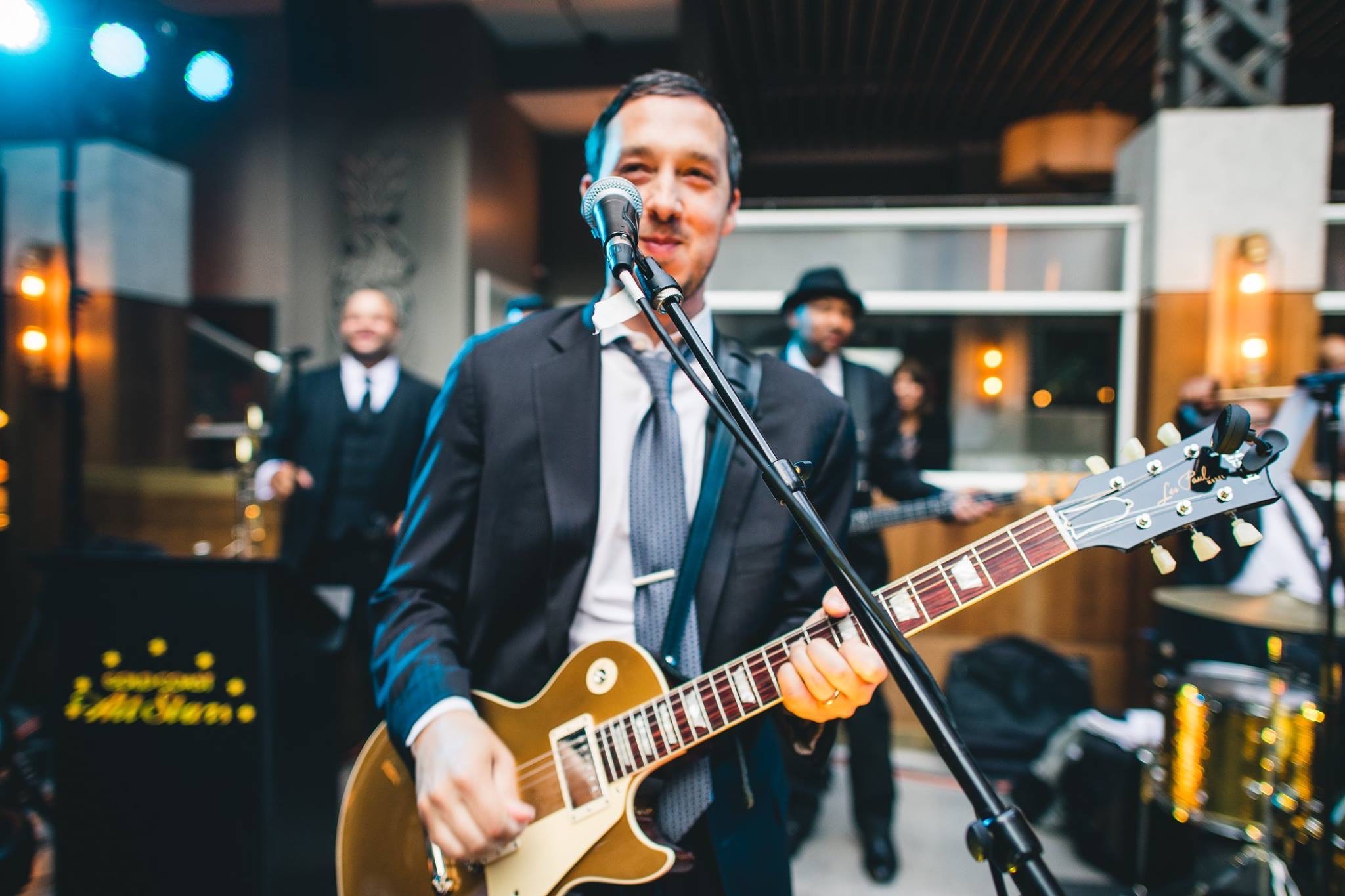 Inside Weddings: What inspired you to get into the business?
Danny Chaimson: When my wife and I got married in LA 10 years ago, I wasn’t really able to find a band that catered to the kind of music we wanted to hear (along with soul and funk, we definitely wanted hip-hop and rock, and we couldn’t handle any cheesiness), so I put together a band from scratch of my touring-musician friends. This concept was very different than anything anyone had seen, and really became the blueprint for me forming The Gold Coast All Stars. I saw there was a big opportunity to fill a niche for couples who were very into music, having really nice weddings, and wanting them to have a concert-like feel. I think it really helped that my only experience in wedding music was cataloguing everything that I didn’t like as a guest at weddings that I attended. The first wedding I ever played was the first gig we booked with The Gold Coast All Stars, so I was coming out of left field as far as the wedding industry was concerned.

IW: Do different parts of the country have different tastes in music?
DC: In general, not really – except for the obvious (country gets more play in the South, Kanye gets extra love in Chicago, etc). No matter where you are, there are people who like all different kinds of music – the internet has made it so easy, as a listener, to find exactly what you like and jump from genre to genre.

IW: What era of music tends to get the best response from guests?
DC: I’m always a fan of making sure every single guest is on the same page as far as being involved, dancing, and having fun – so early in the night, it's important to play stuff that will resonate with everyone, whether that’s soul/motown classics, or even more generic pop music like "Uptown Funk", etc. that at this point is almost more for the parents than the couple and their friends. Once you get everyone to buy in, then you have freedom to go in a lot of different directions musically, as long as every once in a while you’re checking back in to more universally widely known songs.

IW: How far in advance should couples book their entertainment?
DC: This is a question that is widely wrongly answered in the wedding industry. The answer depends on how big of a priority music and a certain band is to the couple. In order to book The Gold Coast All Stars, depending on the time of year, you almost for certain have to book 12-24 months in advance. Many of our clients book their dates based on our availability, and take it from there. There are other companies that put together groups of musicians to play your wedding, whenever the date is – so availability isn’t as much of an issue. But if it's a specific band that is in demand (like all five of our bands are), for music-loving couples, it should really be the first thing you book.

IW: What’s the toughest challenge you’ve faced for a wedding?
DC: It's always tough when we have to play a wedding where the space is divided in some way (i.e. there are no bars set up in the ballroom/tent, and guests have to leave in order to get a drink). Sometimes it may seem like a good idea to give guests different options of places to be, but if your goal is a packed dance floor and a super-energetic vibe, it's very hard to create that atmosphere when half of the people are outside and half are on the dance floor.  No matter how well you’re playing, or how much the people dancing are enjoying themselves, it still will have the energy of a party where the dance floor is only half full. End takeaway: Make sure that all of the bars (or at least some) are in the same room as the band/dance floor!

IW: If you had to choose, would you rather work with a couple who has a strict song list, or one with no idea of what they want played?
DC: I love when clients have great ideas and direction for songs. As long as their choices have the goal of entertaining all of the guests, I’m great with them dictating general song choice/direction. It's important that it feels personal to them, and it honestly makes it more fun for us to have every wedding be different from the last. The only time this becomes a problem is if the couple is picking songs that are only appealing to a small portion of the guests, and are adamant that we stick with that game plan. You always want to balance direction with the freedom to be able to adjust to ensure that everyone is having fun.

IW: What are your two major "dos" and "don'ts" regarding wedding music?

DC:
Dos
- Use your special dances (first dance, parent dances, last song, and ceremony music) as chance to pick songs that really mean something to you as a couple. You have a lot more leeway to play songs that wouldn’t work in other situations, so use it to really put your stamp on the night.
- Mix it up genre wise – don’t be afraid of hip-hop (just put it later in the night) or rock (throwbacks and sing alongs kill late night). The best weddings have a smart mix of everything, as most wedding guests nowadays are just as likely to like a Jay-Z song as they are a Queen song, etc. (as long as they’re the right song choices).

Don’ts
- Don’t put all three of your dances (first dance, father-daughter, mother-son) in a row to start the night. There’s no rule saying that you can’t space them out. Start with your first dance and invite everyone to join in to get the night started, then put parent dances in an hour or so later to break it up once momentum is established. No guest wants to sit through 10 minutes of watching other people dance when they’re chomping at the bit to get the party started.
- Don’t drag on the night too long. Ending at midnight or 1AM or whatever you have as the ultimate end time in your mind is not nearly as important as ending on a high note. You and your guests will remember the feeling of wanting a little more and having had the best night ever, no matter what time it is. You’ll also remember the sloppiness of a wedding that went on too long and ended with half the energy that existed 30 minutes prior if you drag it on too long.

IW: What’s the most common song featured on a “do not play” list?
DC: People tend to not want cliché wedding songs (YMCA, Raise Your Glass, Black Eyed Peas, etc.).

IW: How has wedding entertainment changed over the years – since you’ve been in business and beyond?
DC: Not sure if its a good or bad thing, but I’m seeing a trend where younger couples now tend to have closer, more friend-like relationships with their parents, and because of this are more deferential to what would please their parents and their parents’ friends. I find myself at times having to reassure them that some Jay-Z and Kanye will go over well later in the night, whereas when I first started, couples were so psyched at even the possibility of this.  As I said, the best weddings are the ones where there’s some Springsteen and Snoop – the best of both worlds!

IW: What do you wish every couple knew about booking wedding entertainment?
DC: I wish couples knew that there isn’t a reason to settle for something they don’t want. Trust your gut, and if you feel like music is important to you, if you look hard enough you will find something that matches up to what you’re invisioning. Your entertainment company should be able to work with you to make your dream concert come to life. Also, if music is important to you, this is an area where you absolutely should not cut corners price wise. In the whole scheme of the wedding, the extra $5-15k you spend on the band that you love might be the single thing that makes or breaks the night (and the overall enjoyment of your guests, which could render all of the other money spent as somewhat wasted – no matter how much!).