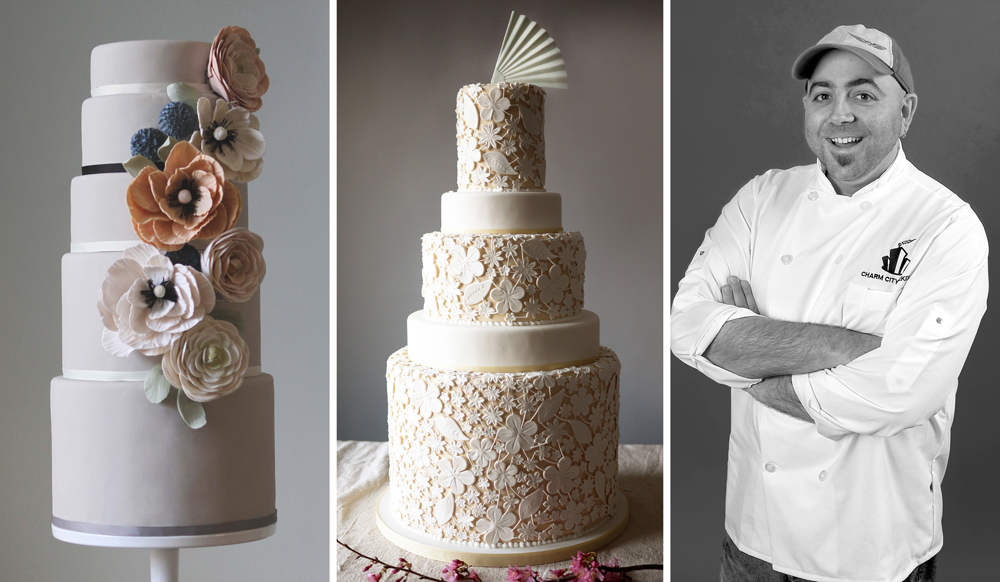 While wedding cakes have long been basic ivory-frosted confections, these traditional desserts have transformed into bona fide works of art in recent years. And, as Duff Goldman declares with a laugh, it’s all his fault.

Duff, the owner of Baltimore’s Charm City Cakes, became a household name when Food Network’s Ace of Cakes, a reality show documenting the imaginative cakes designed at his bakery, debuted in 2006. Since the network show wrapped its 10th and final season in 2011, Duff has built a pastry empire. The chef has introduced a line of decorating supplies, a second location of Charm City Cakes in Los Angeles, and right next door, a do-it-yourself cake-decorating studio called Duff’s Cakemix.

It was at Charm City Cakes West that Duff opened up to Inside Weddings to explain what every couple needs to know about cake design. From the importance of choosing a passionate decorator to the trends you should probably ignore, Duff shares the blueprint for creating your dream wedding confection.

What should couples look for when choosing a cake vendor?
Don’t just go to one [vendor], go to a few. Because, first of all, it’s fun to eat and talk about cake. Talking to different people gives you a good sense of the [options] out there, and you begin to understand who is actually capable versus people who are just doing it. When you see someone getting excited about [your cake], it’s like, wow, if they’re excited, then you’re excited. Once you’ve narrowed it down, then you go for a tasting. A mealy apple is pretty bad, but a close second is a beautiful cake you cut into and it’s like, really? In wedding cakes especially, you get what you pay for.

How should couples approach the consultation with their cake vendor?
I like when people come with ideas, but not a set-in-stone vision. As cake decorators, all we think about are wedding cakes, so we want to be able to share our expertise. Brad Pitt is probably great on paper, but he might smell. You know what I mean? You may see a cake and love it in the magazine with the lighting, but in real life it might not be what you’re looking for. We help people separate fact from fiction. One thing I’ve always found really frustrating is when you tell clients, this [will cost] $2,500 and they’ll say, ‘What can we take off that cake to make it $2,000?’ If someone wants to knock off $500, let’s design another cake. Let’s make a perfect $2,000 cake as opposed to a less-than-perfect $2,500 cake.

How have online inspiration boards influenced the cake styles couples find interesting?
When I started the business in 2002, I had to learn all the cake trends in [bridal magazines] because that’s what people would bring in. [Image-sharing websites] have really taken that away and made the style of wedding cakes a lot more fluid. It makes the soil more fertile and you get a lot of ideas as opposed to, ‘Oh, I guess brown and blue is in this season...’ Brides are able to visualize beyond what is in magazines.

What trends are you seeing in cake design?
As far as decorating, ombré is really cool. There are lots of different ways we’re seeing it used. Couples are also choosing really neat colors and antique styles, like pewters in conjunction with off-whites and neutrals. I think a lot of brides are taking cues from the red carpet and runway. Fashion designers are working with neutrals and interjecting something brighter; it’s pretty stunning. Couples are also getting more into texture – instead of smooth fondant, we’ll roll it thin and craft details like ruffles. I don’t think floral cakes will ever go away, and I’m happy about that. I like clean piping and flowers. Brides are also more educated about flavors and are willing to take more risks. It’s not just white, chocolate, and red velvet – we have 60 flavors on our menu.

Which trends are you ready to see go away?
Besides cupcakes [laughs]? I’ve made my feelings regarding round cake on top of square cake pretty clear. Sometimes when people come in and ask for it, [I let them know] that it’s not creative. Topsy-turvy cakes were 70 percent of the cakes we did for a while. It was ridiculous. There’s something to be said for restraint. My team can do extremely ornate work, but showing some restraint is almost much more difficult – to make something that’s really simple, clean, and perfect rather than covering it with a thousand little details. I also don’t like naked cakes – buttercream and fondant, while beautiful, serve a purpose in keeping a cake from drying out. Naked cakes get dry on the outside so fast.

How do you recommend couples choose cake flavors?
I very subtly try to remind them that they’re not the only ones who will be eating cake at their wedding. I let people know, ‘I get it, you love chocolate, but what about the other 150 people? There might be some who don’t like chocolate.’ With that practical wedding wisdom, you just need to articulate those ideas and people get it.

It seems like cake designs have become more outrageous in the last 10 years…
Yeah, it’s our fault [laughs]. It’s weird because the spectrum has gotten wider. Some cakes are crazy and out there, and then there are other cakes that were [great] in the 1980s and ’90s, but they’re also still [great] today. We try to show people a range. You want an erupting volcano? We’ll do it. You want a beautiful white cake with flowers? We’ll do that, too. This is also true of ingredient variety – you have to know how to produce gluten-free and vegan options. Five years ago you could get away with not doing gluten-free. Now, you have to have it.

What would you tell someone who is considering asking a friend to bake their cake, instead of hiring a professional?
I would advise against it. Most people don’t want to have that kind of stress. You also don’t want to give someone that much responsibility. The cake and the dress are the centerpieces of the reception – when you walk into a party and there’s a cake there, you go and look at it. Since cakes are such a major aspect of the celebration, it’s important to have someone spend time thinking about it.

What’s the most memorable wedding cake you’ve ever created?
[Charm City Cakes Executive Chef] Geof Manthorne’s older brother was getting married and it was a really torturous design because he and his fiancée couldn’t agree on what they wanted. Finally his fiancée said, ‘If you can make a cake that looks like Gustav Klimt made it, that’d be awesome.’ Their wedding took place outside at a winery in Maryland and the sun was just starting to set. All of the golds and coppers and rich tones in the cake, when hit by the sun, just lit up. I thought, God just told me I’m supposed to be doing this for a living.

Are there any designs you won’t do?
Babies and pets. I think it’s weird. If you get a life-sized version of your cat, you have to cut its head off and eat it. There’s something odd about that. Last year, there was a lesbian couple in Oregon, and a baker refused to make their cake. I was pretty outspoken about the incident [and made their cake for free]. I was giving a lot of [related] interviews, and someone said, knowing I’m Jewish, ‘What if I asked you to make me a Nazi cake with Hitler on it or a swastika?’ I said, ‘Sure. I’ll make you that cake. Go ahead and eat it – I dare you.’

How would you describe your cake design process?
It’s like guided meditation. We try to understand from people what it is they’re looking for, and we try to help people transport themselves to the day of their wedding and think about what they want to see on that table when they walk in. We advise clients to avoid some of the pitfalls in making decisions about their cake. For example, one time a bride’s mom came in and designed the cake, and it was a really cool midnight blue with ombré and constellations all over it. When I delivered the cake and walked into the room, all the chairs were covered in white with a hot pink ribbon. So we do our best to assist people and help them make the right decisions aesthetically, and within their [spending limit].