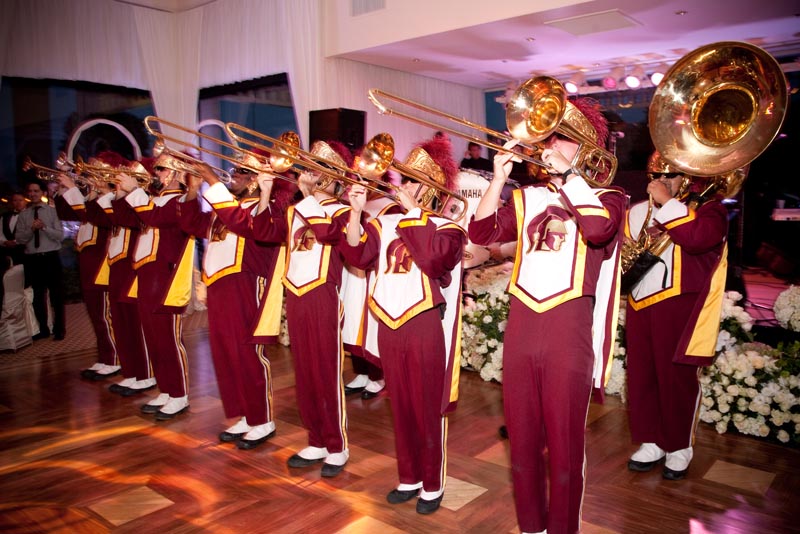 One of the most vivid and cherished memories from your wedding day will likely be the moment you begin your walk down the aisle. Whenever you hear it played, the music you chose to accompany your ceremony will forever bring you back to the experience, so selecting meaningful music is an important task. When it comes time to plan, start by considering four broad categories (which encompass many different types) of music, which we will refer to as Traditional, Sentimental, Contemporary, and Personal.

Traditional
Traditional music encompasses those melodies you probably know best from attending the weddings of others: Wagner’s “Bridal Chorus,” Pachelbel’s “Canon in D,” and “Trumpet Voluntary,” or “Air” by Bach. Some other tried and true songs are Beethoven’s “Ode to Joy,” the “Pavane” by Faure, or “Wedding Day at Troldhaugen” by Grieg. Used mainly at Jewish weddings, “Dodi Li” and “Erev Shel Shoshanim” are also familiar favorites. These songs are wonderful because they conjure up a sense of formality and drama that everyone will appreciate.

Sentimental
Music we’ll refer to as Sentimental are songs with lyrics that express romance or a sense of nostalgia. You do not need to have a singer performing for the audience to absorb the meaning of the music, particularly if they are well-known tunes. “One Hand, One Heart,” “The Best is Yet to Come,” “My Heart Will Go On,” “All I Ask of You,” or “When I Fall in Love” are recognizable love songs that do the trick of setting a gushy tone when performed purely instrumentally.

Contemporary
When it comes to using Contemporary music during your ceremony, there are fewer guidelines. Often, these songs have not had time to become a part of a traditional “wedding” repertoire, so you get to be the pioneer. Start by thinking about which albums or performers you feel connected to. Songs by Faith Hill, Whitney Houston, Michael Buble, and Josh Groban can be adapted for a wedding ceremony by a well-versed arranger. While they are a little more challenging to adapt,due in part to their style or very recent rise in popularity, songs by artists such as Coldplay, U2, and other rock bands can also make for dramatic accompaniment when performed by a pianist or string ensemble.

Personal
If you decide to further personalize your selections, the range for self-expression is vast. What we’ll refer to as Personal music encompasses songs you consider to be unique to your own experiences, whether they be traditional, sentimental, contemporary, or all of the above. They can be songs that are memorable from your childhood, such as “Over the Rainbow” or something that reminds you of your courtship, such as “Con Te Partiro (Time to Say Goodbye),” popularized by Andrea Bocelli. Perhaps you just love the soundtrack from a certain film, such as Life is Beautiful, Il Postino, or Titanic–– why not tap into that emotional response for your entrance?

In terms of personalization, your processional is also a point in the ceremony where you can play with the texture of the atmosphere. After sending the bridal party down the aisle to a traditional song, change up the tempo or the sentiment completely, and enter to something more individual, perhaps a song that reminds you of your father if he is going to be the one to walk you down the aisle.

Changing instruments, not just songs, can also signal a dramatic shift in tone. If a quartet was used for the bridal party’s entrance, the heavenly sounds of a solo flute or harp (or other solo instrument you find moving) would lend an ethereal air to your entrance.

With so much thought going into your processional, consider a total shift in mood when it is time for your recessional. Instead of walking back up the aisle to Mendelssohn’s “Wedding March,” how about “When I’m Sixty-Four” by The Beatles? The recessional is a perfect time to inject some humor into what can become a serious affair. In fact, there are a number of Beatles songs that could work for the recessional, including “I Wanna Hold Your Hand,” “Eleanor Rigby,” and “All You Need is Love.”

On the other end of the spectrum, maybe doing a modified tango up the aisle with your new dance partner in life is more in line with your personalities. Celebrate the opportunity with the sounds of the opera Carmenor “Una Cabeza,” which became popular from Scent of a Woman. You could also call upon the Beach Boys to end the ceremony with some “Good Vibrations.” Have fun with your recessional music; the possibilities are as plentiful as your creativity will allow.

If you are willing to go beyond the familiar “Here Comes the Bride” there are many musical expressions you can communicate to your guests during your ceremony. A representative from your chosen entertainment company should be available to guide you through this planning process and share with you their ability to work with all different types of music and musicians. But begin by thinking through these broad categories –– Traditional, Sentimental, Contemporary, and Personal –– on your own. Many pieces of music will actually fit into more than one category, but approaching the infinite amount of songs out there with this approach will help you clarify the statement you want to make with your music.

When you have selected once category of music, try to stay focused on it so you can dig down and explore the wealth of options. In the end, when it comes to something as emotional as music, this is the time to listen to your heart and shut down all the noise in your head.