We partnered with Minted to offer insider tips and on-trend suggestions for our couples. Some of the links included may be affiliate and if you make a purchase, we may receive revenue; however, everything we feature has been independently selected and reviewed by our editorial team. We never include a venue, vendor, or product unless they have a proper place on InsideWeddings.com. We thank you for supporting our sponsors!

Congratulations on this wonderful marriage milestone! You've officially been married for 365 days and it's time to celebrate your one-year wedding anniversary. You're likely preparing to cut into the top tier of your wedding cake that you've been saving for this special occasion, and you may even be searching for the perfect first anniversary gift.

While couples can certainly choose their own wedding anniversary gifts based on their partner's taste, many pairs choose to follow tradition and gift their beloved with a present that fits within the theme of traditional anniversary gifts.

Whether you're searching for a one-year anniversary gift for your beloved or you're gifting a special couple with a present to honor this moment in their young marriage, we're sharing some of our favorite first-anniversary gift ideas based on tradition.

What is a traditional one-year anniversary gift?

Each year of marriage comes with a traditional anniversary gift theme that couples can choose to follow if they wish. As the anniversary years get larger, the themes typically become stronger. For the first year anniversary, the traditional gifting theme is paper.

Even if you already have an anniversary gift in mind that isn't paper, a set of personalized stationery is an easy addition to your non-paper first-year anniversary gifts or your modern first anniversary gift to cover both traditions. It’s especially thoughtful knowing you designed stationery personally for your beloved, and it can also be exciting to receive stationery with a new married surname (if one was taken).

From fun and colorful to timeless and classic, take a look at these stationery designs: 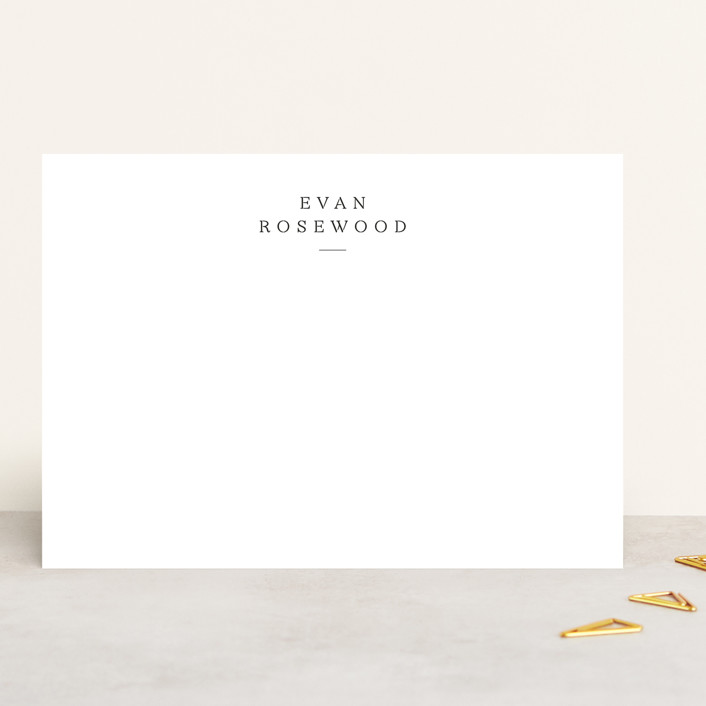 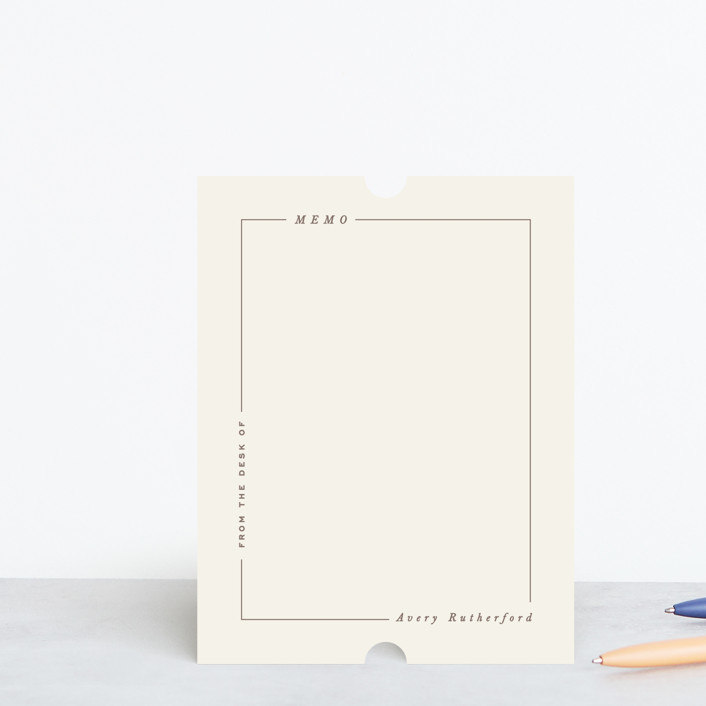 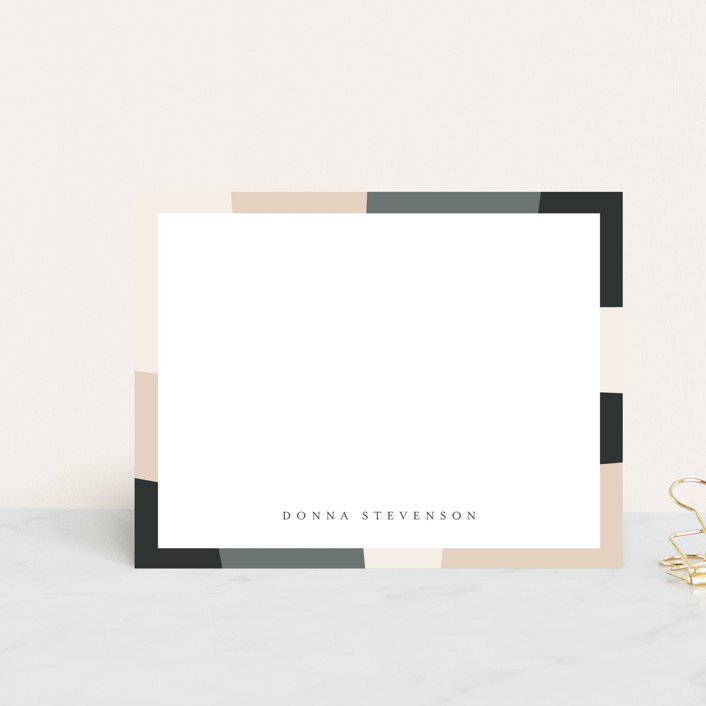 “Mosaic” personalized stationery in Blush by Anelle Mostert for Minted

Enjoy life's biggest moments throughout your married life with wedding vows & quotes art. Fill your home with beautiful pieces of art featuring your wedding vows, love quotes, or even excerpts from some of your loved ones' wedding speeches. Paper gifts should be meaningful – the options are endless!

Browse some styles below – from letterpress to gold foil: 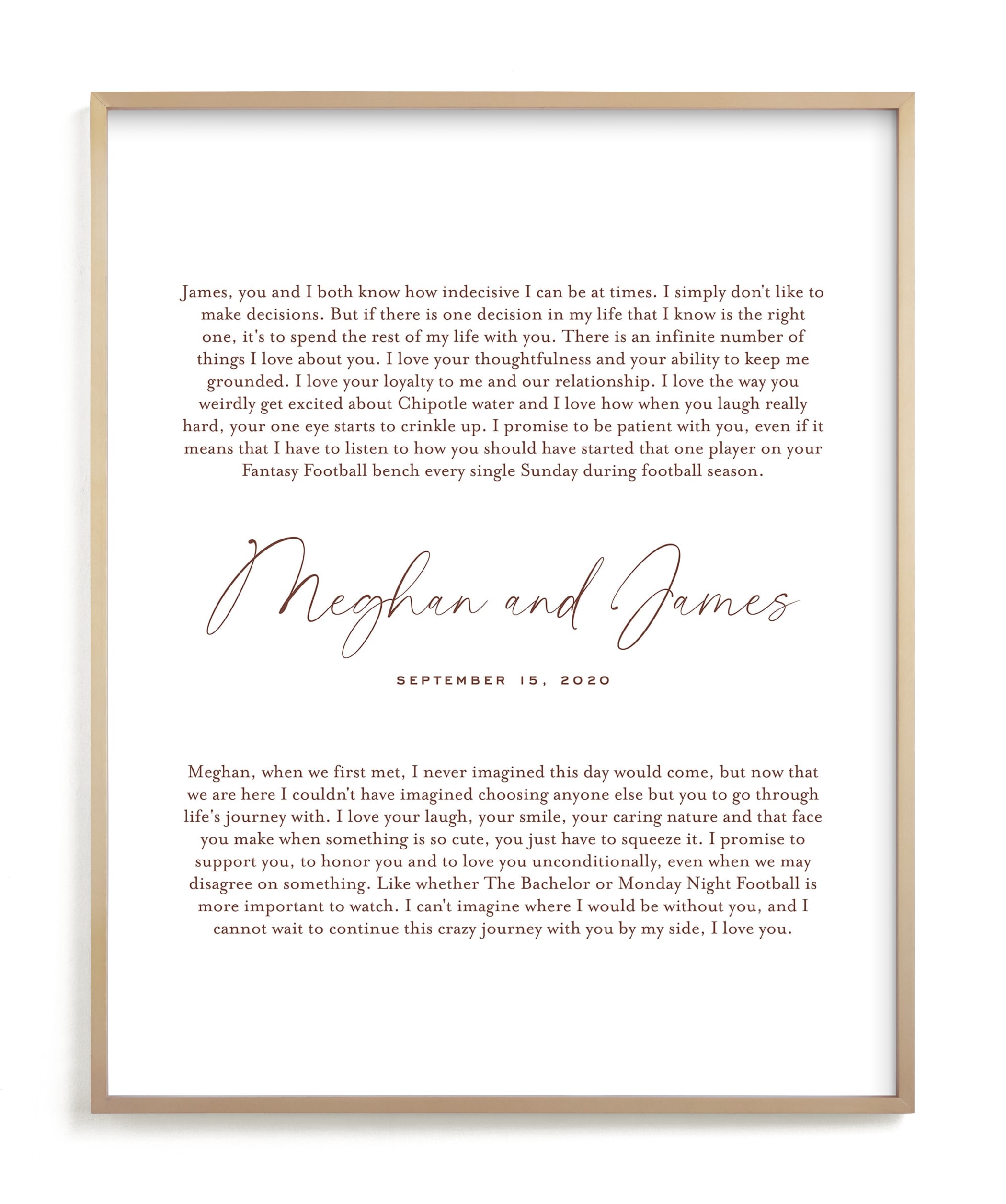 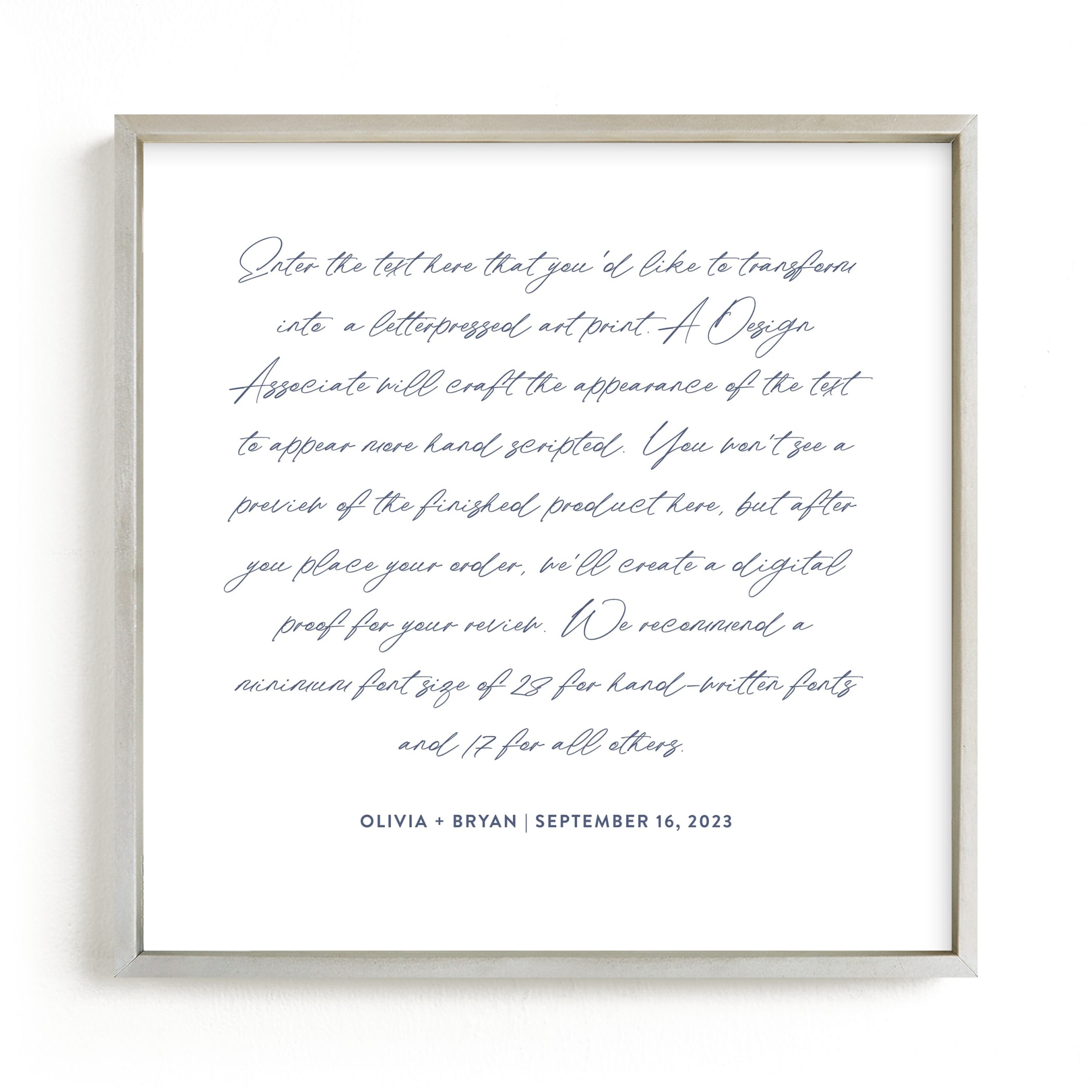 If your beloved is the sentimental type, the perfect anniversary gift will be a custom photo book filled with photos from your first year. If you haven't purchased a wedding album yet, an anniversary celebration is the perfect time to do so. As first year anniversary gifts are traditionally paper, a beautiful photo book or photo album to display on your bookshelf or coffee table is a great idea.

See a few of our favorites, below:

“Hardcover Annual Photo Book” for the first year of marriage in an array of sizes, colors, and styles by Artifact Uprising 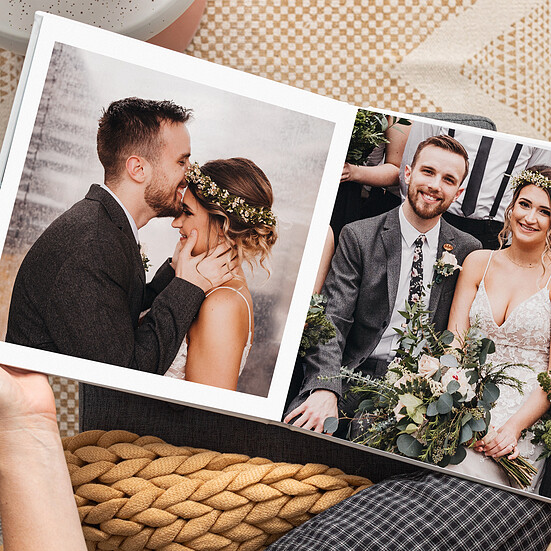 If you want to create a piece of art that's subtle yet meaningful, consider custom maps for one of your anniversary gifts. The perfect first anniversary gift, you can choose to customize the map with a special location that's dear to you both: the city where you reside, your wedding location, or even where you first met.

From classic letterpress styles for a timeless look to foil designs for a modern gift, browse some of our favorite custom map first anniversary gifts, below: 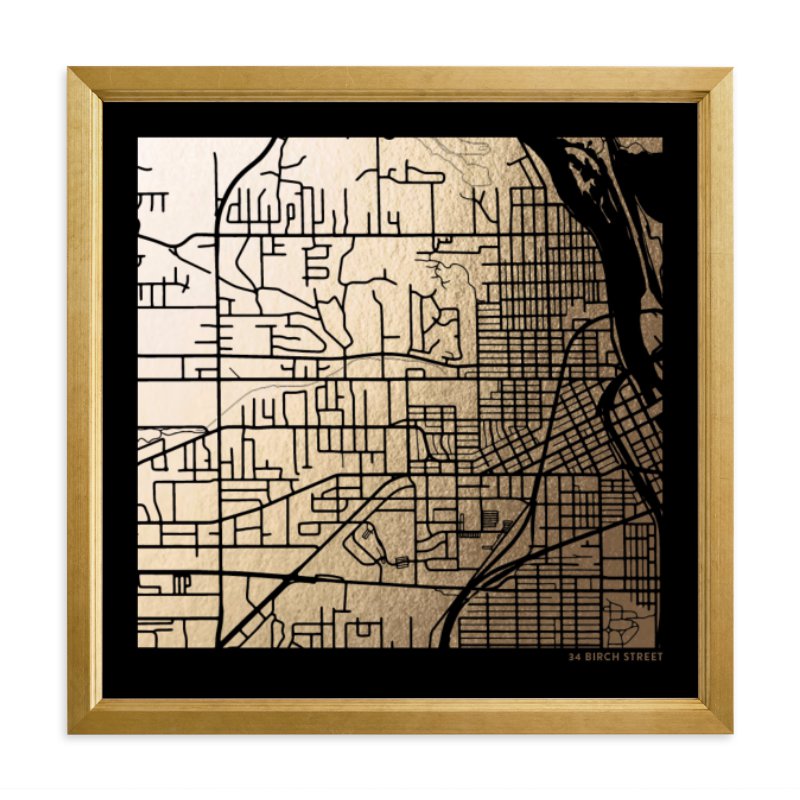 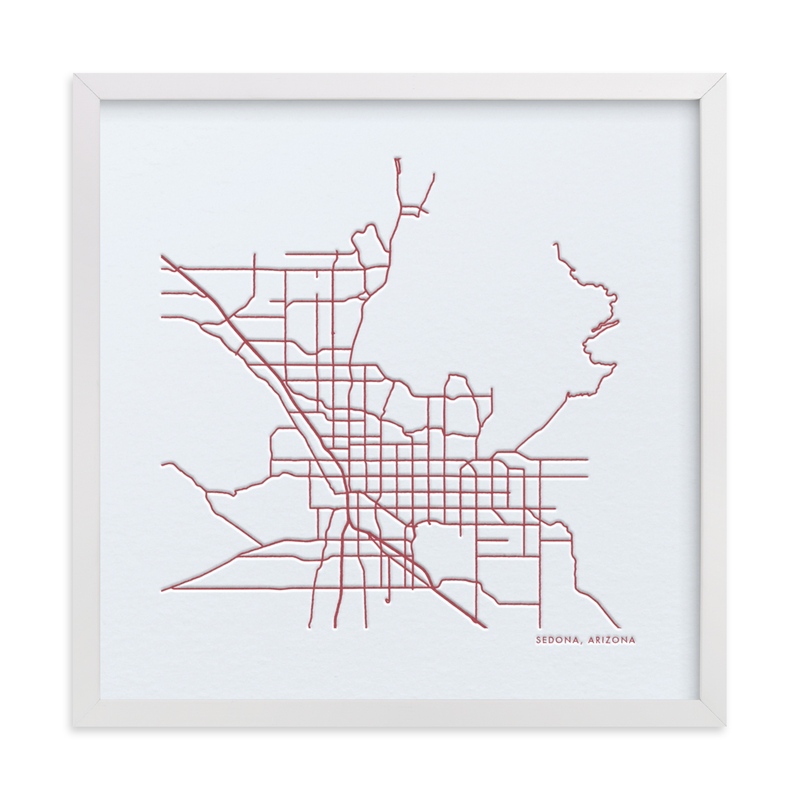 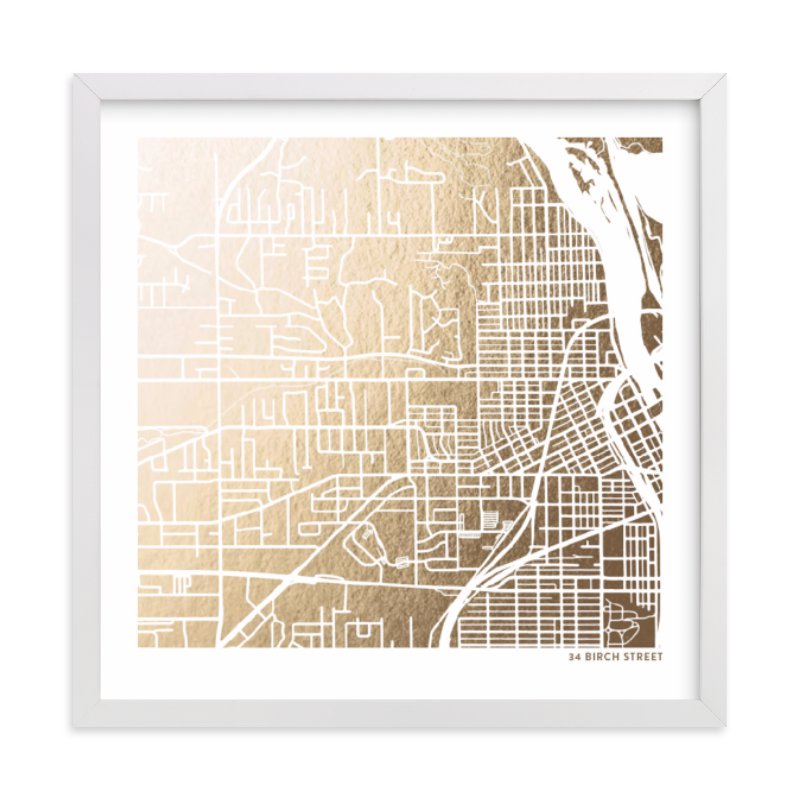 If your beloved loves to write or even jot down notes on paper versus their phone or computer, then a personalized journal or anniversary journal will be a practical gift that goes along with the traditional theme of this major-milestone anniversary. Customize the journal with their name or even special photos to turn this traditional gift into one of the best anniversary gifts for your first anniversary.

Take a look at some of our favorite designs, below: 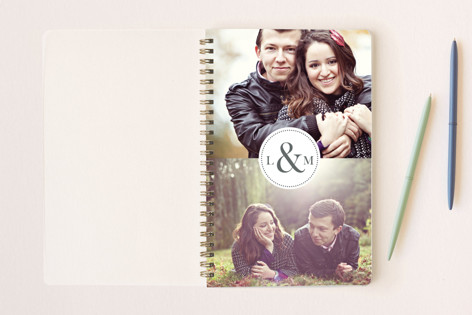 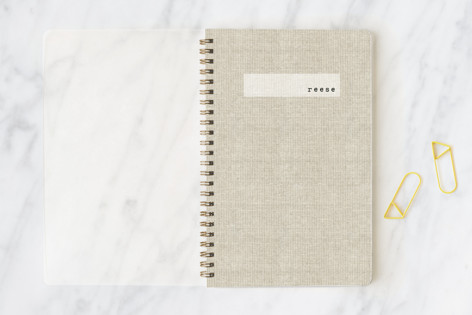 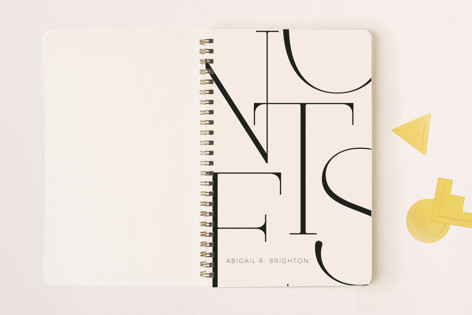 For couples who want their first anniversary gift to offer a memory of the wedding day, we love the idea of incorporating your favorite wedding photos into beautiful photo art for your home. Consider incorporating your vows, all of your favorite images from the big day (or experiences throughout the first year of marriage), or your wedding date for a piece of art that makes the perfect gift for your first anniversary.

See some ideas from Minted, below: 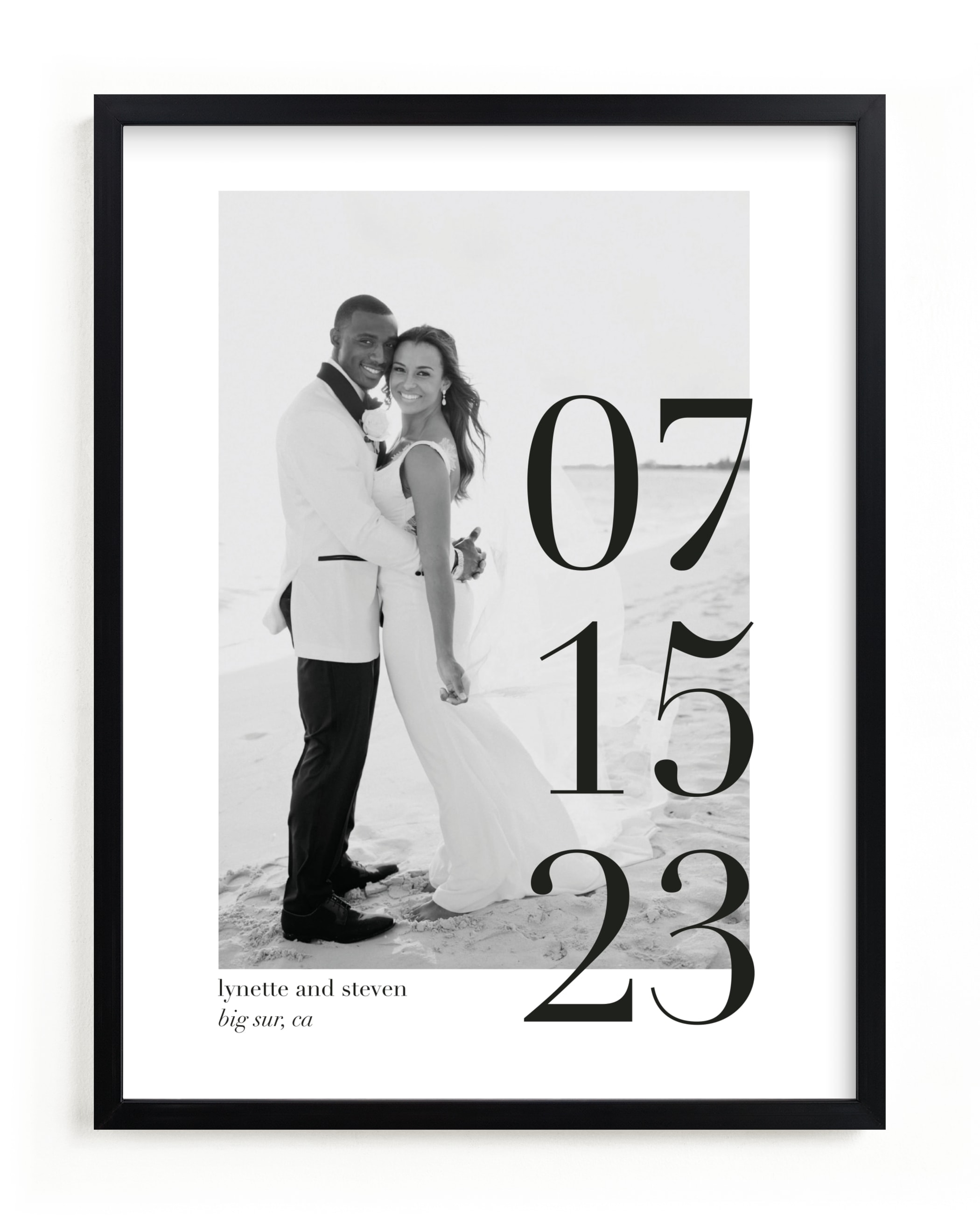 7. A Custom or Personalized Book

The paper anniversary offers an excellent opportunity for couples to gift each other with a special book. Whether it's a first edition of their favorite novel, a customized book that reminisces on the events that occurred on your wedding day in years past, a collection of their favorite books, or even a coffee table book that's been personalized with their name, books are an excellent option for paper anniversary gifts.

Take a look at some options below: 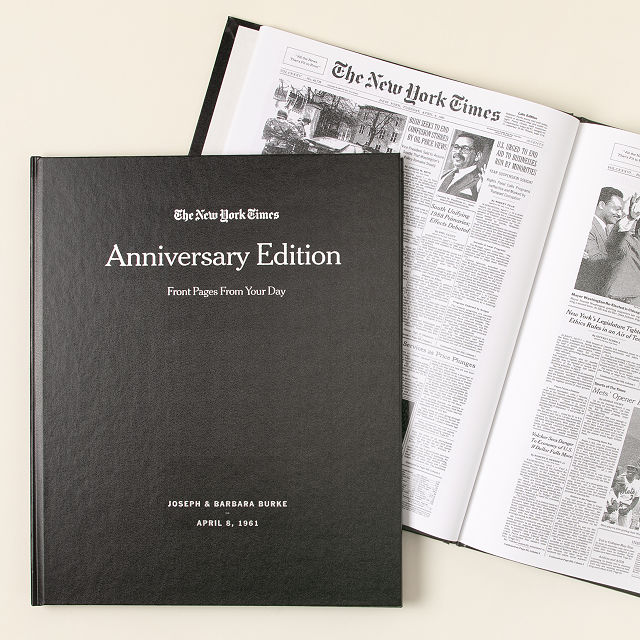 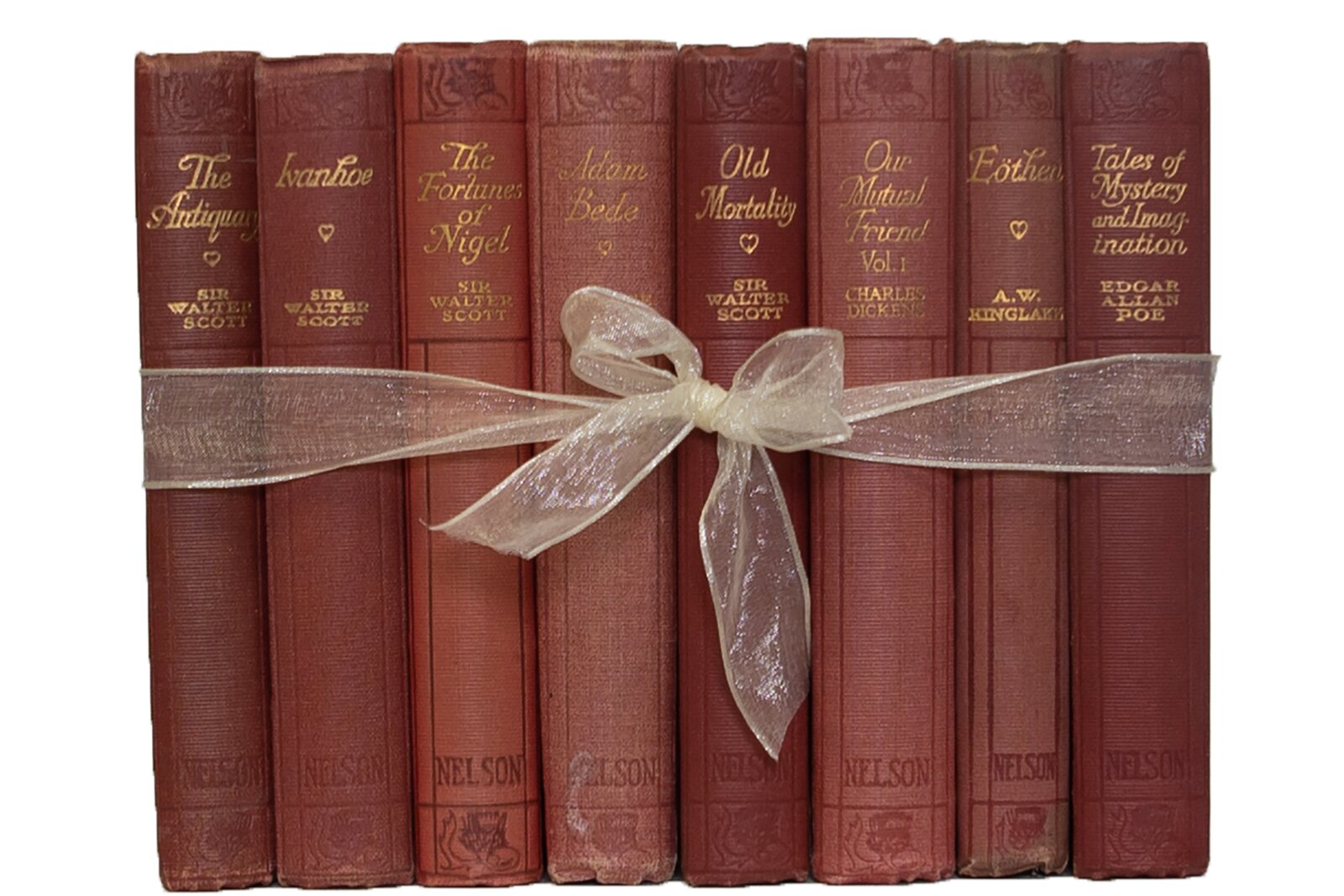 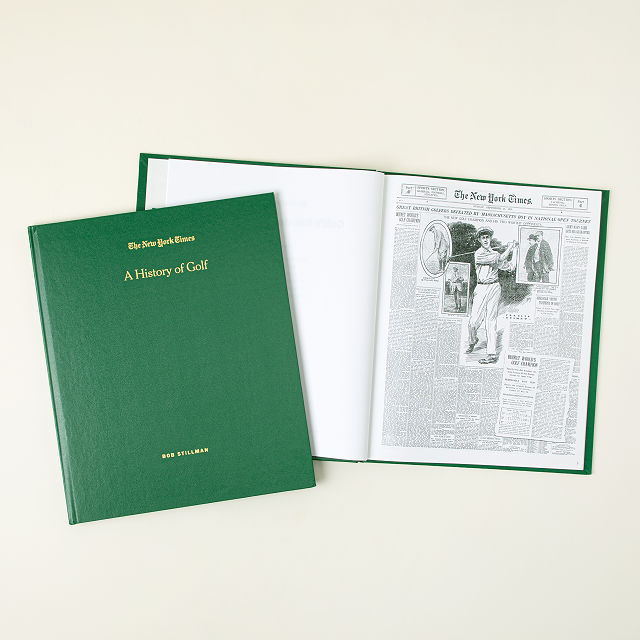 If you haven't framed any of your wedding photos, your first anniversary – known as the paper anniversary – offers the ultimate opportunity. For those couples who have already framed their wedding portraits, we love the idea of having a custom letterpress portrait made of your home. 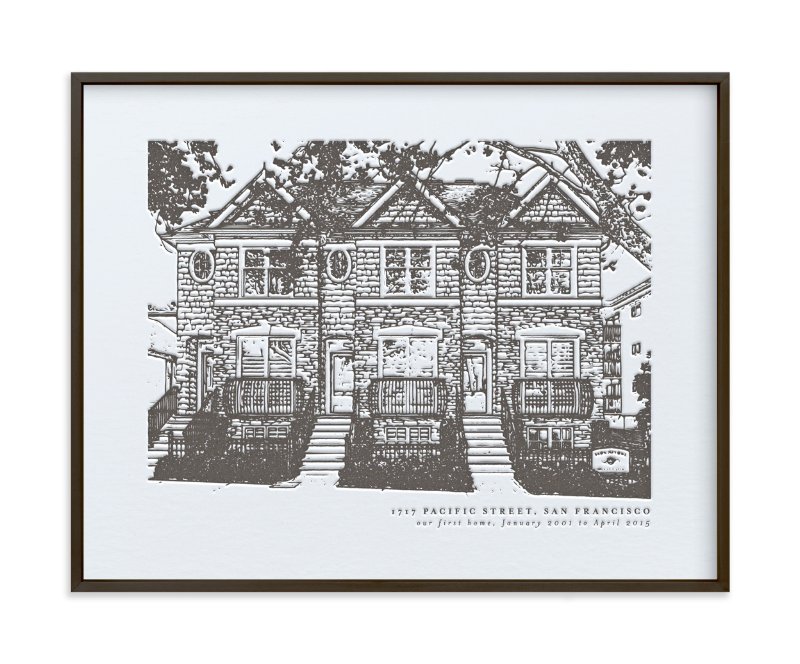 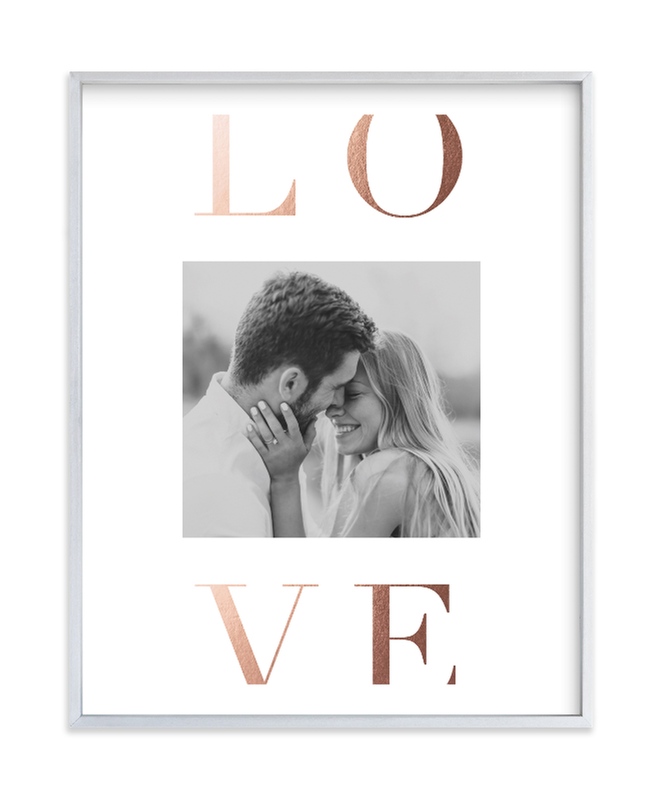 Whether you're looking for paper anniversary gifts that will be stashed away in your love's drawer or displayed in your home, you can't go wrong with a classic love letter, a sweet message printed on a photo from your first year married or your wedding day, or a letter detailing your love during your first year of marriage in a beautiful frame.

For inspiration, view the first anniversary gift ideas, below: 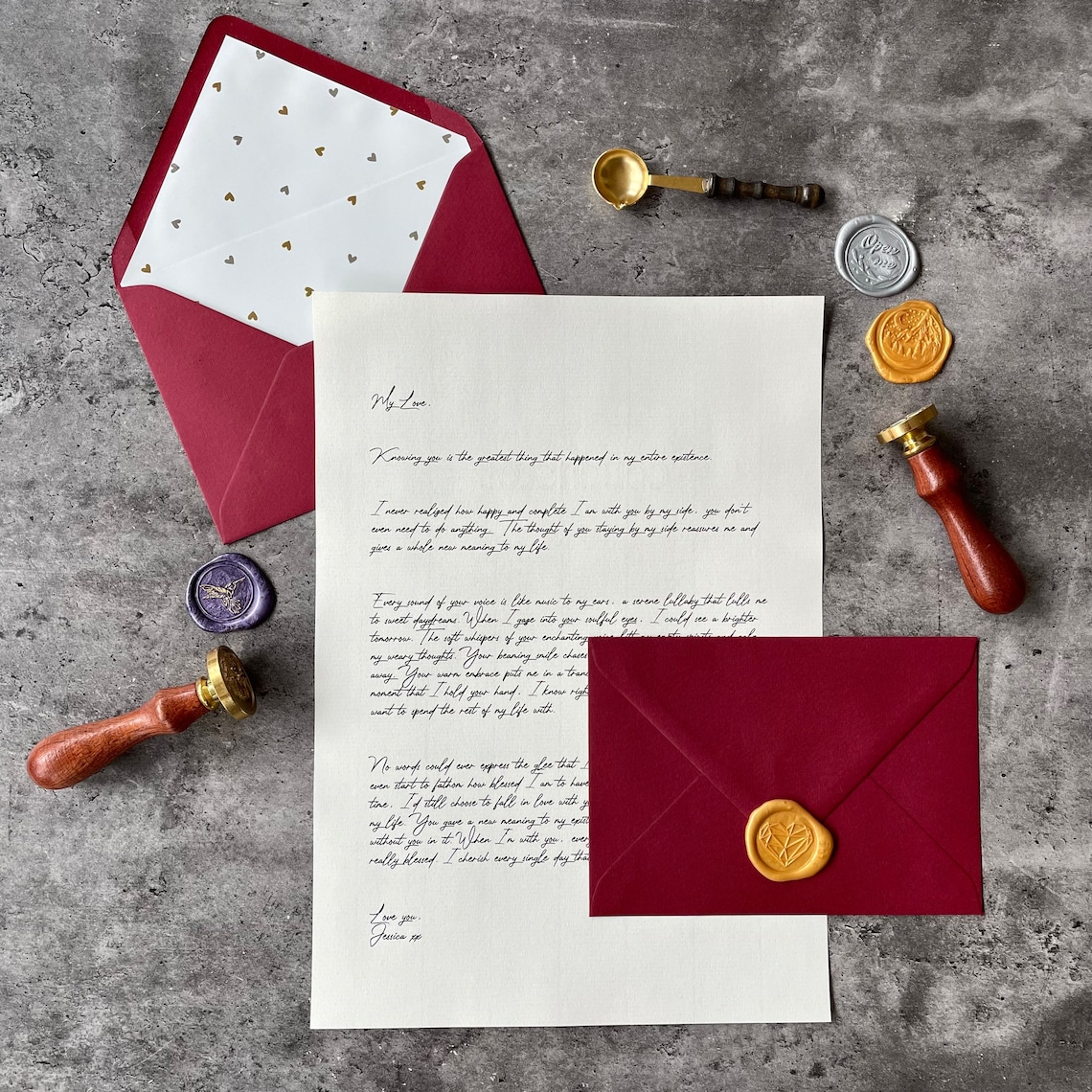 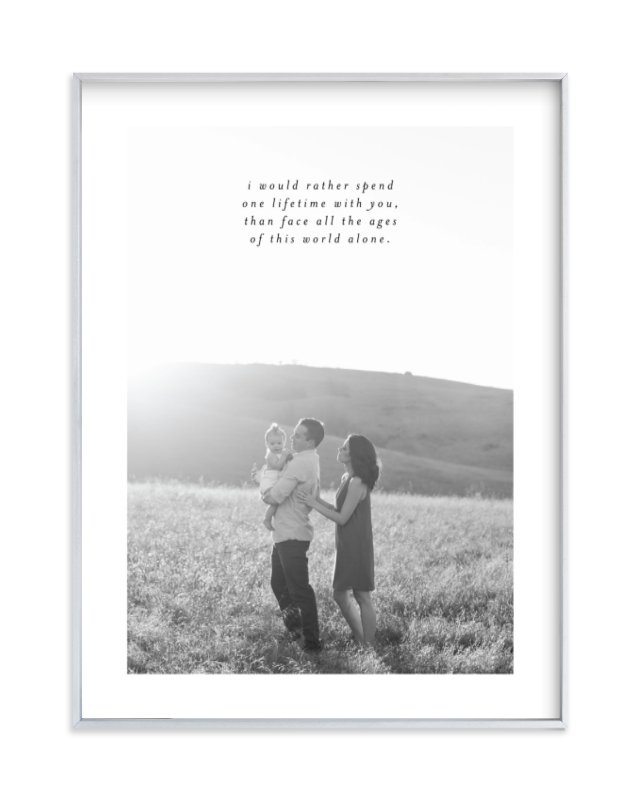 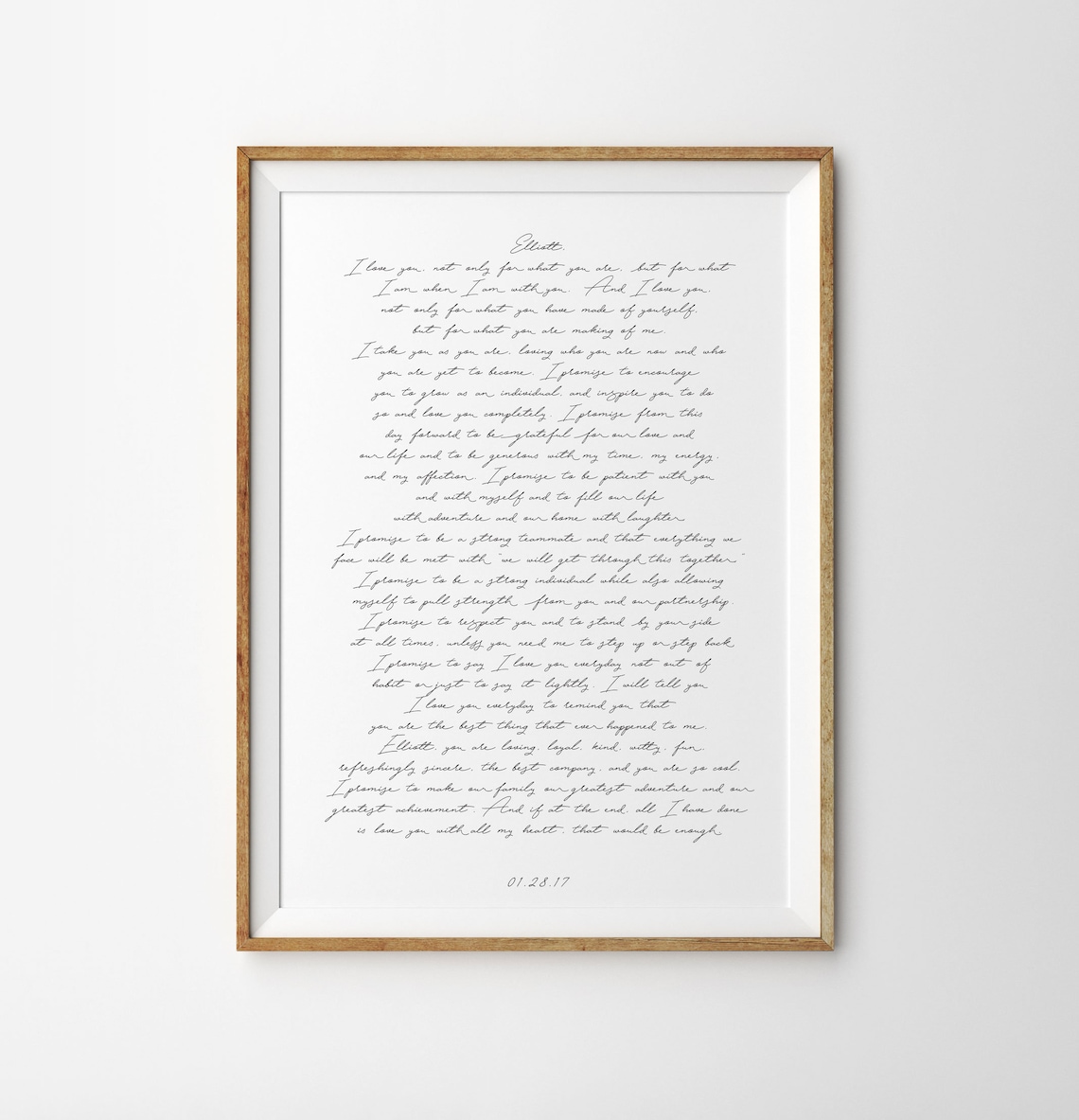 If none of the above ideas are the right fit for your sweetheart, consider a 1st wedding anniversary gift that's entirely personal to you as a couple. Gift sheet music of your beloved's favorite song, have the lyrics to your first dance song printed in elegant script, have a custom puzzle made for a future at-home date night, or have a piece of custom art created in a modern theme that highlights the coordinates of a location special to you both. 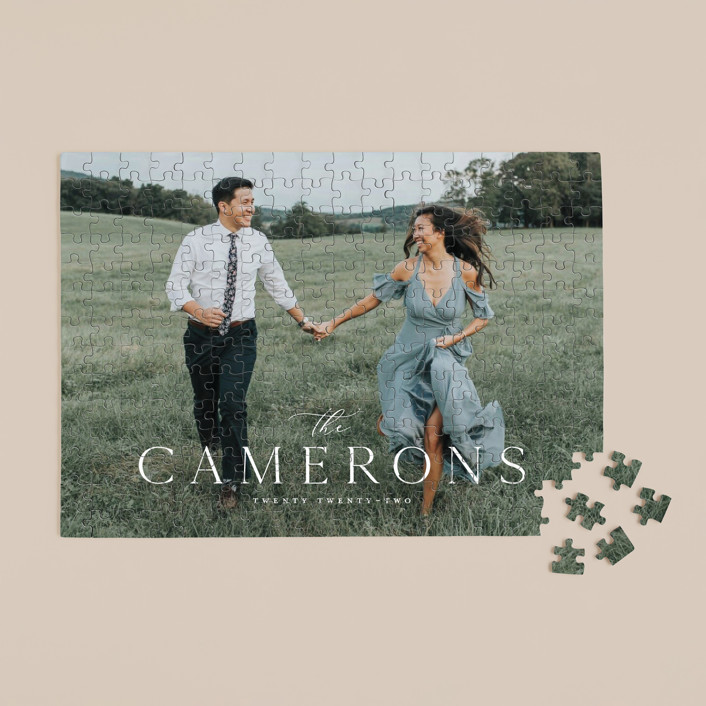 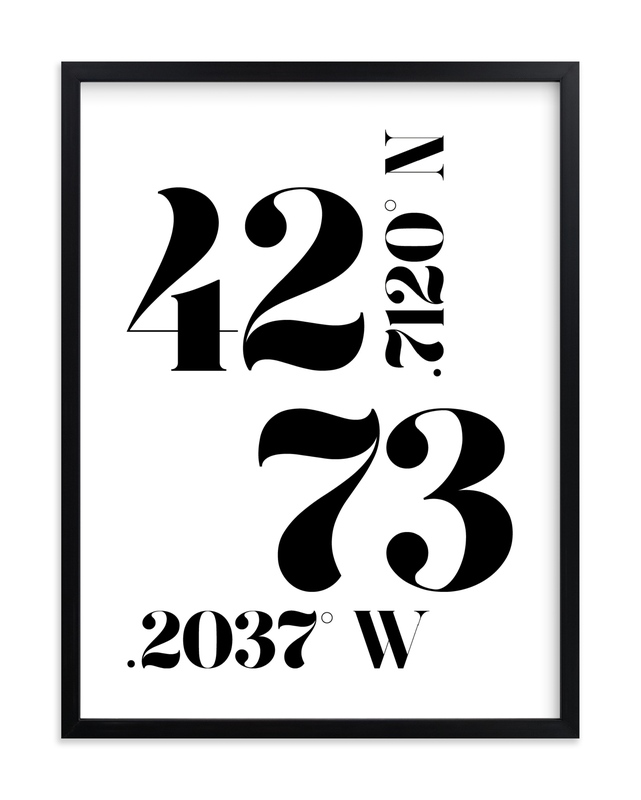 “Where the Heart Is” custom coordinates wall art ideal for wedding location, home, and more in Charcoal with Matte Black frame by Annie Clark for Minted

Check off one of your planning to-do list items with these invites!

Our Favorite Save the Date Cards

Before you send your invitations, you'll need your guests to save the date!

Take a look at beautiful, inexpensive wedding invitations from Minted.