Some couples may feel uncomfortable with the idea of asking parents for the bride’s hand in marriage, due to the historical implications of the tradition. However, many have adapted the custom to more modern sensibilities, whether that means including the bride’s mother instead of just her father, or focusing more on the blessing rather than permission. Read tales about how real grooms featured in the pages of Inside Weddings got the blessing of their future in-laws, and click each name to find out how their big days turned out! 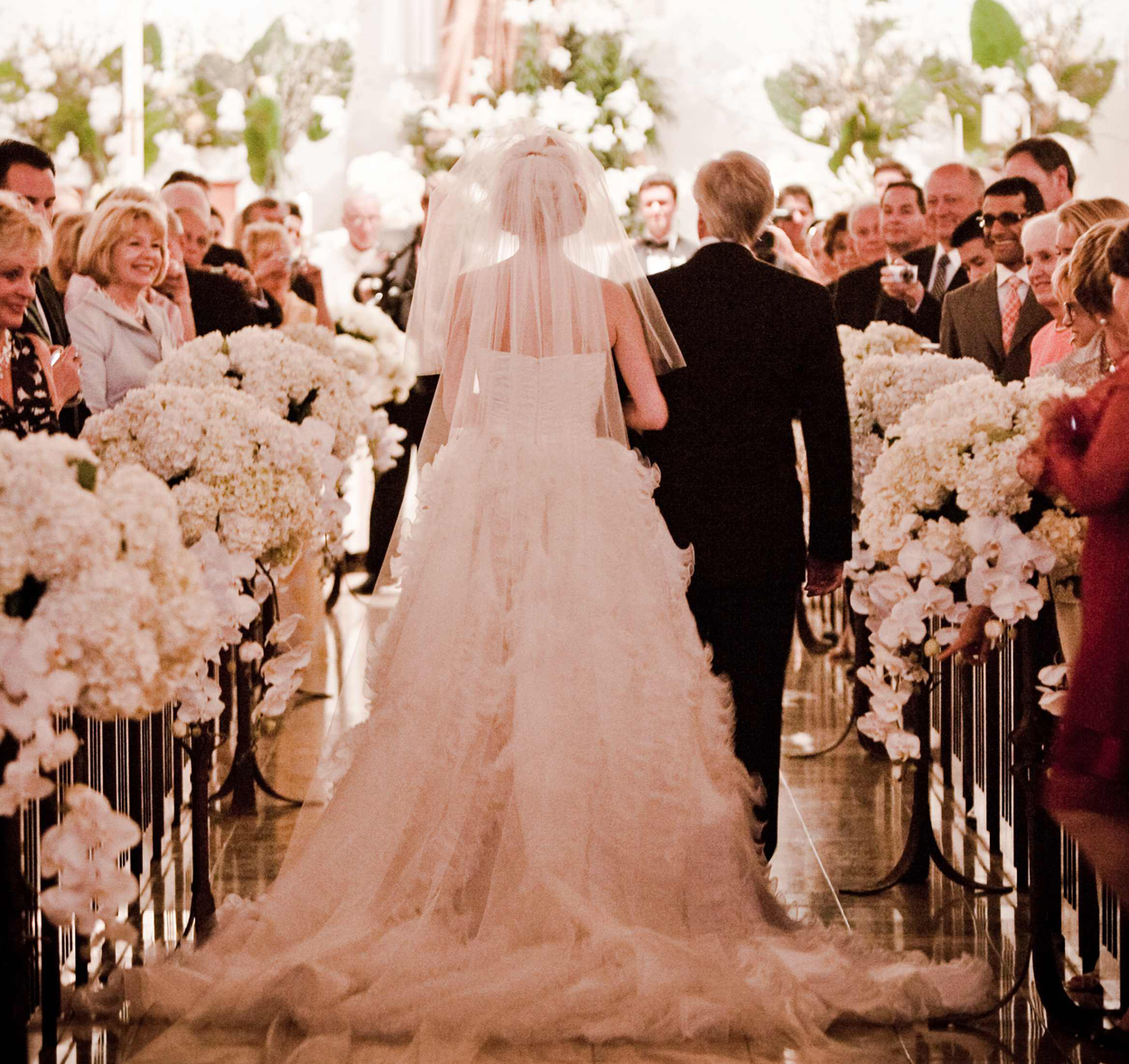 “Hana’s parents live in Osaka, Japan, so I texted them on LINE (the app), asking if they had time to talk. I’m sure they had a pretty good idea of what I was going to ask. Hana’s dad (who ended up marrying us), started crying while I was asking, which made me start to cry. It was pretty special.” - Sam

“ I asked her father if he could step aside with me for a moment and asked for his blessing with tears in my eyes, and in his also. After putting his gun back in his safe he was joyful!” - Trevor

“I was proposing with her mother’s engagement ring, which her father had. I asked him to meet and if I was able to use the ring.” - Cody

“Unfortunately in the spring before we got engaged, Sarah’s father Mitchell was diagnosed with a very aggressive form of cancer. I knew well before we got the news that I wanted to marry her, but his deteriorating health accelerated the timeline in asking for her hand. After first speaking with Sarah’s brother, he was able to arrange for Mitchell and I to have a private moment together for me to get his permission. Obviously it was a bittersweet moment.” - Andrew

“It was during breakfast where Jordan’s mom and I would have morning conversations with coffee, but when I asked, it was without Jordan present. I asked her if I could marry her Jordan and I promised to be my best and stay honest to her daughter. Her mom’s reaction was very happy and confident that I would be true to her daughter, and she asked me to never ever hurt her daughter.” - Kimbal

“We were at her dad’s condo in Fort Lauderdale, Florida. Danielle, her dad, and I were sitting outside on the patio, anticipating Danielle to go inside to shower and get ready for dinner. As soon as she went in, I told her dad, “I have a question for you, may I marry your daughter?” His eyes shot open with excitement, and he was thrilled.” - Brian

“I am very old-fashioned in many ways – one of them was my approach in asking permission to marry Emily. I am very blessed with amazing in-laws and have always been very close to them. Emily’s father and I have always enjoyed wonderful meals together and over the years, have experienced many unforgettable times together over beautiful food. My approach was simple enough – ask Emily’s father to dinner and ask his permission. After plans were successfully made, I had to think of how I was going to actually ask. After many days of writing draft after draft of potential speeches to implement over dinner, I finally mastered the one that I felt expressed my true feelings and desire to marry the love of my life. As soon as I started explaining why I wanted to marry Emily our chat became pure and simple. I wanted to marry her. I wanted to be her husband. To love and protect her. And I would always do so. After a wonderful dinner of steak and red wine, Emily’s father gave his permission to me and the rest is history. We still continue to share our love of food and wine with one another, and I doubt that will stop any time soon.” - Stuart

“Asking Katie’s parents for their blessing was very important to me. However, Katie’s parents don’t stay in one part of the world for very long. With their constant traveling, I had to take advantage of the small windows when they were in town and ensure my timing didn’t tip Katie off to what was going on. Luckily the stars aligned, and Katie had an appointment that would keep her occupied while her parents were in town. I’m sure Katie’s parents were aware of my intentions, but I sent her dad, John, a text asking if he and his wife Carrie we available to speak that night, as it was important to me to get the blessing from both of them. Nervous, I followed my original text with an additional note, ‘Nothing is wrong, just wanted to get your opinion on something.’ Followed by a response from her dad with a time that night that worked. After arriving at their home and stumbling over some small talk, John finally asked me, ‘So, what did you want to talk to us about?’ I explained my love for his daughter and asked for his blessing before asking her to marry me. I graciously received their blessing but only after a few questions and a deep discussion about the true weight of this decision.” - Cory

“I asked Margot’s father for his blessing before proposing. We took a trip to his home in Bend, Oregon. It worked out perfectly because we were scheduled to stay from Friday through Monday, but on Sunday Margot had to travel back to San Francisco for work. That gave me the opportunity to ask her father on Monday, without having to create some distraction or reason to get some time alone with him.” - Brian

“We live pretty far away from each other, so although I thought it would be important to do it in person, I did it over the phone. It was sort of a big deal, because she was Catholic, and I was Jewish, and there always was this tension in the relationship over it.” - Josh

“I set up a phone call with Shawnte’s mother (her father passed away when she was 8yrs old). On this phone call, I emphasized how important it was to get her blessing. I shared with her my feelings for Shawnte and the bond her and I have created throughout our relationship. I asked her if she would allow me to spend the rest of my life with her first born. Thank God, she said yes.” - Eric

“Nikki’s younger sister was getting married.  As such, the pressure was on.  I had already decided well in advance that I wanted to marry Nikki, and although I did not want to do anything to take away from Nikki’s sister’s wedding, I also wanted to ease her parents’ minds. About a week before her sister’s wedding, I called Nikki’s father to set up a lunch with him and my future mother-in-law for the Thursday before the wedding. At that point, I think everyone was on the same page about what was going on. I met her parents for lunch and within seconds of sitting down stated, ‘I think we know why I asked you for lunch,’ and proceeded to tell them how much I love their daughter and to ask them for their blessing to marry her. Fortunately, they agreed.” - Ryan

“Since I was living in Las Vegas at the time and her parents were in San Diego, I anxiously called Gia’s parents to talk to them about my intention to propose to their daughter and luckily for me, they approved!” - Joshua

“I was a total wreck of nerves! I was visiting Sarah family’s house and I had her brother call her as a distraction while I talked to her family. I had a very short window to be alone with her mom, dad, and uncle. I told them that I was totally in love with their daughter and I would like their permission to ask her to marry her. We were talking in whispered voices so Sarah couldn’t hear in the other room, and I don’t think what I was asking really hit her family until days later when they called me. They seemed thrilled and gave me their blessing.” - Christopher

Read about five conversations you should have with your parents after getting engaged and find out what to do if your parents don't approve of your engagement.

Tips for Organizing Your Nuptials While Away from Your Partner

How to Avoid Being Late to Your Wedding

Tips for Organizing Your Nuptials While Away from Your Partner

How to Avoid Being Late to Your Wedding