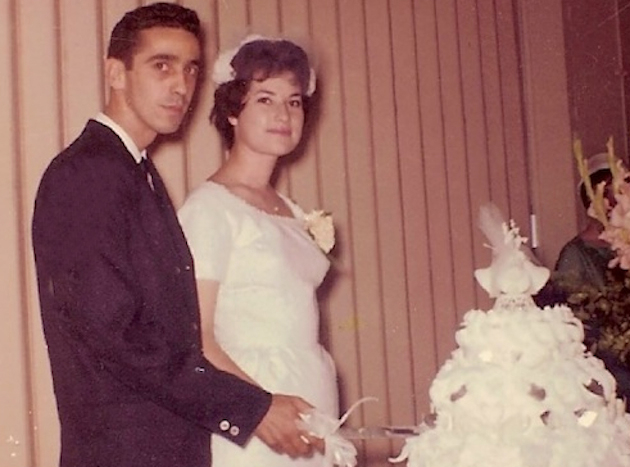 More than fifty years ago, (June 12, 1962), my parents eloped in what remains my favorite wedding story of all time. My mom had met my dad's sister Rose in beauty college and the two became fast friends, Auntie Rose often bringing Mom home to Rollingwood where she lived with her parents and her two younger brothers. Soon the whole family was fond of my mother, and Grandma and Auntie Rose began conspiring to set her up with my dad, who was away in the service. They sent him a picture of Mom and suggested they meet when he was home on leave, and Dad -- who had been effortlessly attracting women since grade school according to Aunt Rose -- figured, why not? He arrived on time to pick up his date, and the instant he saw her my father knew -- my mother was the girl he was going to marry. "You remember what Mommy was wearing?" I squealed the first time I heard the story. "Yes, I remember. She was looking down, tucking her blouse into her waistband as she walked towards the door, and when she looked up, I knew I was a goner." "What was Daddy wearing?" I asked my mom in full swoon. "How am I supposed to remember? It was decades ago!" Clearly my father is the romantic in the family.

Anyway, Mom and Dad dated for three whole weeks before my father proposed. Now, if I ever accepted a proposal from a sailor I'd known for less than a month, my father would murder me ("That's right!" he agrees), but according to Mom, "I already knew his family, plus your father was really cute and he smelled really good." After the proposal, Dad left for Guam for his final 18 months in the service, and Mom devoted herself to writing letters to her beloved across the sea. Dad sent her a record with the song "Navy Blue" by Diane Renay on it, a record my sister and I would wear out years later singing along until someone (I'm pleading the fifth) accidentally sat on it and broke it. Blue, navy blue, I'm as blue as I can be / 'Cause my steady boy said, "Ship ahoy," / and joined the Nay-ay-vee.

When the year and a half was up, my mom took the bus to stay with Dad's family and visit her fiancé; she'd since left the area to move back home with her parents while she recovered from surgery, so the visit was only meant to be for a few days. But when Dad took her to the airport for her return flight home, he had a sudden inspiration: Instead of leaving, she could run away and elope with him that night! When Mom pointed out that her luggage was already on the plane, Dad told her he'd buy her whatever she needed… and Mother agreed. "What were you thinking?" I like to admonish at this point. "You didn't even have jobs! And all of Mom's stuff was being flown back home." "I knew your father would get a job eventually," Mom always blithely responds. "Besides, we'd had drinks in the airport bar, so I wasn't thinking clearly."

Back in Rollingwood, my wayward parents told Grandma and Grandpa that "Jennie missed her plane," and they were just killing time until she could catch the next flight. Then Mom went upstairs to borrow a suitcase from Auntie Rose, and Dad set a ladder outside of Auntie's window so they could get the borrowed luggage out of the house and into the car without my grandparents suspecting. "If you say anything to Mom and Dad, I'll kill you," my father casually informed the high-school age brother who was also on the ladder helping with the escape. "I wouldn't have said anything anyway," Uncle PeeWee (real name: Larry) tells me. "I liked your mother. We all did."

After buying a wedding outfit at the Macy's in Hillsdale, Mom, Dad, Auntie Rose, and Auntie's boyfriend, George, began the drive to Carson City, Nevada, where my aunt and eventual-uncle served as witnesses for the ceremony. Mom wore a two-piece outfit, a little veiled hat, and a corsage, and Dad wore a sweater and slacks. A photograph exists of the renegade quartet looking impossibly young and slightly shell-shocked standing on the chapel steps, Auntie Rose sporting cat-eye glasses and Uncle George looking inexplicably handsome in a loud argyle sweater. Dad at 22 is tall and thin and indeed very good looking, and Mom at 21 looks fresh-faced and beautiful. No one even knew that the photograph existed until I was leafing through the pages of one of Auntie Rose's albums -- somehow she ended up with the lone photo in existence marking my parents' nuptials.

It has gone into the annals of Oliveira lore that when my dad phoned his parents that night to announce that he was married, my half-asleep grandmother groggily replied, "Okay -- don't keep Rose out all night," before hanging up. "Who the hell was that?" Grandpa demanded, furious he'd been disturbed in the middle of the night... and as my grandfather glared, the full realization of what she'd just heard hit my grandmother. Hard. "It was Mike!" she choked amid rising panic. "He said he and Jennie got married in Carson City!" "What the hell are you talking about?" Grandpa bellowed. "He doesn't even have a job! And what about Rose? They can't keep her out all night!" It turns out that Auntie Rose was on her way back to Rollingwood -- unchaperoned, I might add -- with Uncle George in his car, apparently smart enough to know that staying out all night would not be wise. Mom and Dad honeymooned in Sacramento for a few days before taking the bus back to reality, where they began a life together that's lasted -- for better or for worse -- for five eventful decades. "And they said it wouldn't last," my mom is fond of saying. Luckily, "they" were wrong. Happy anniversary to my beloved parents. I love you with all my heart. xoxo -- Marilyn Oliveira

Photo: Mike and Jennie Oliveira cut their wedding cake at the post-elopement reception hosted by the sister of the bride after everyone stopped yelling.

UPDATE: According to my father, Auntie Rose DID stay out all night. After arriving in Carson City, the quartet spent the night in a motel -- girls in one room, boys in the other -- and my parents got married the next day. On the way home, Uncle George dropped the newlyweds in Sacramento where they honeymooned at a charming property that upgraded their room to a suite when they heard my folks were freshly married. When Auntie Rose and Uncle George got back to Rollingwood, she announced, "Say hello to your new son-in-law," causing mayhem and panic among my already stressed-out grandparents before she let them off the hook by assuring them she was kidding... and they were so relieved that their only daughter had not also eloped that they forgave her the transgression of staying out all night. The End.

The First Steps to Take When Choosing a Wedding Dress

What Do Your Photographer & Makeup Artist Have in Common?