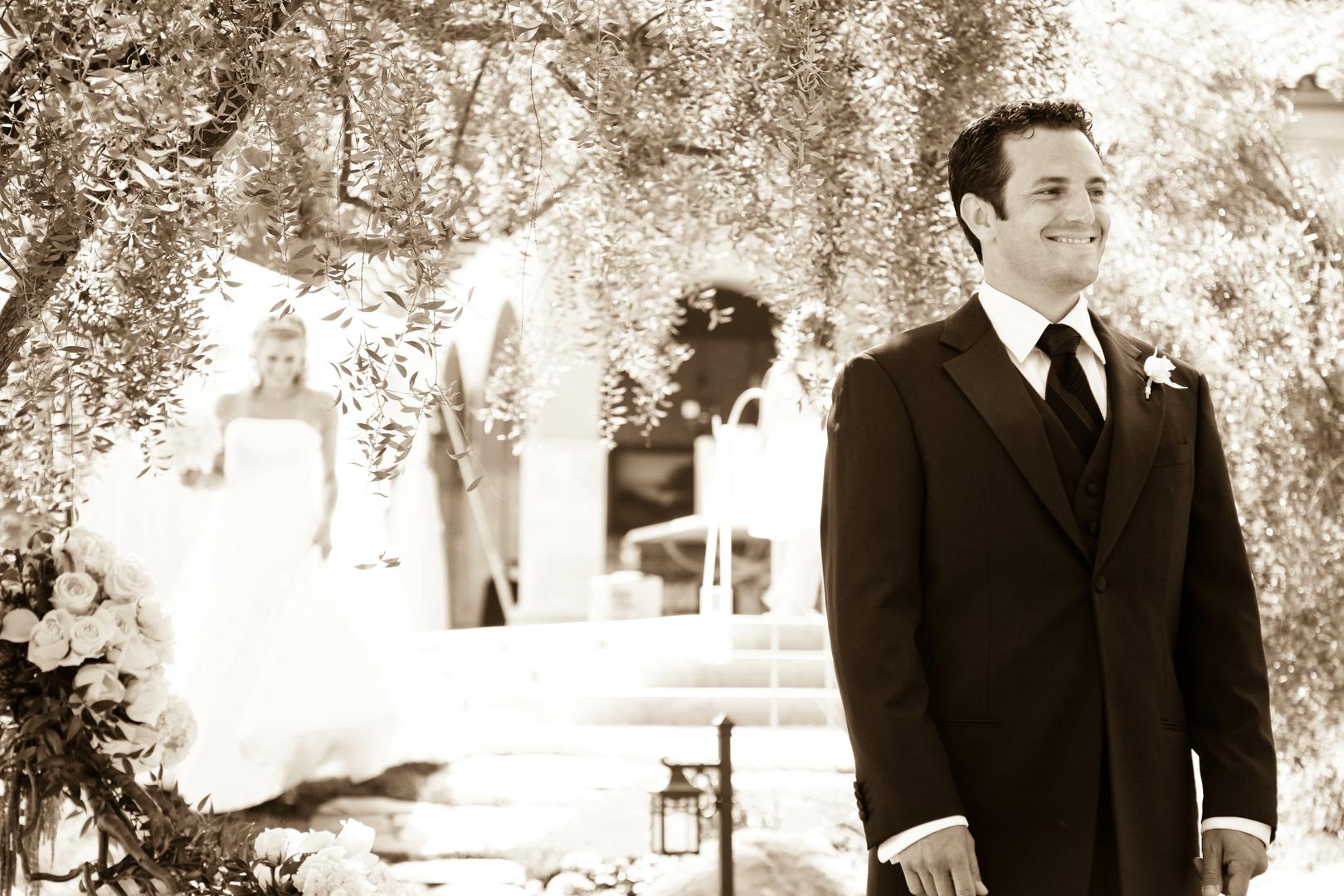 Should the groom see the bride before the ceremony on their wedding day, or will it mean bad luck? All superstition aside, many couples are forgoing the tradition of avoiding each other before the wedding and instead choosing to capture the moment on video and in photographs. Often called the “first look” or the “first glance” reveal, this alternative gives a couple time to connect emotionally before the whirlwind of their wedding day begins, and ensures ample photography time for fantastic images.

The Tradition
The idea that the groom should withhold from seeing the bride before the ceremony dates back to when arranged marriages were typical. This custom developed during a time when a groom often met his bride for the first time on their wedding day, and it was feared that if the groom didn’t like the physical appearance of his bride, he might not show up for the ceremony.

Even a woman who is not superstitious may have long cherished the idea of an “Aisle Reveal” – the moment when the groom sees her as a bride for the first time at the end of the aisle. Many couples will employ a second photographer to capture the reaction of both the bride and the groom. The "first look" isn't right for everyone, but if you are open to it, there are many advantages to taking this route.

The Twist
For couples who value their photos and video highly, the "first look" provides extra time to capture great images, and can be done in a way that is equally memorable and romantic as the traditional Aisle Reveal. The couple can enjoy one-on-one time before the ceremony, and accomplishing formal photos early can diminish the stress of the day. Houses of worship will often restrict the photo/video team from the altar area in the front of the church, which can make getting a first-reaction shot of the groom difficult. The "first look" reveal is the perfect solution for restrictive ceremony locations. Also, Jewish couples traditionally see each other prior to the ceremony for the Ketubah signing, and planning a "first look" adds an element of romance to moment.

Making it Memorable
When the groom sees his bride for the first time in all of her glory, the moment should be a special one and documented accordingly. In many cases, the groom will have his back to the bride as she approaches, then turn to see his wife-to-be. Some grooms opt to be blindfolded to add an element of fun to the reveal. This is an emotional way to keep the traditional surprise, and yet maximize your time.

You can also keep the element of walking down the aisle when doing your "first look" at the ceremony location. Before the ceremony, the groom stands at the altar with his back to the aisle as the bride prepares to walk toward him. Close family members can be invited to witness the reveal while sitting in the pews. Once the bride reaches the groom, she taps him on the shoulder, he turns, and the moment is captured on film. One bride with whom I worked wore one gown for the "first look," and then surprised her husband by wearing another for the ceremony. Other options include having a groom stand behind a door which the bride then opens, or to have the bride concealed behind a curtain. One bride wanted to pop out of a box to surprise her husband-to-be!

Whichever route you choose, the moment you see your beloved for the first time on your wedding day will be amazing -- no matter where or when it takes place.

The Best Blooms for a Beach Wedding

The Best Blooms for a Beach Wedding