Immediately following their star-studded wedding in Los Angeles (see Zena and Tank's wedding), newlyweds Zena Foster and R&B singer Durrell "Tank" Babbs set off on a two-week honeymoon. Spending their first summer as a married couple in Paris, the South of France, and the islands of Mykonos and Santorini in Greece, the pair enjoyed an incredible honeymoon filled with delicious food, relaxation, and sightseeing. 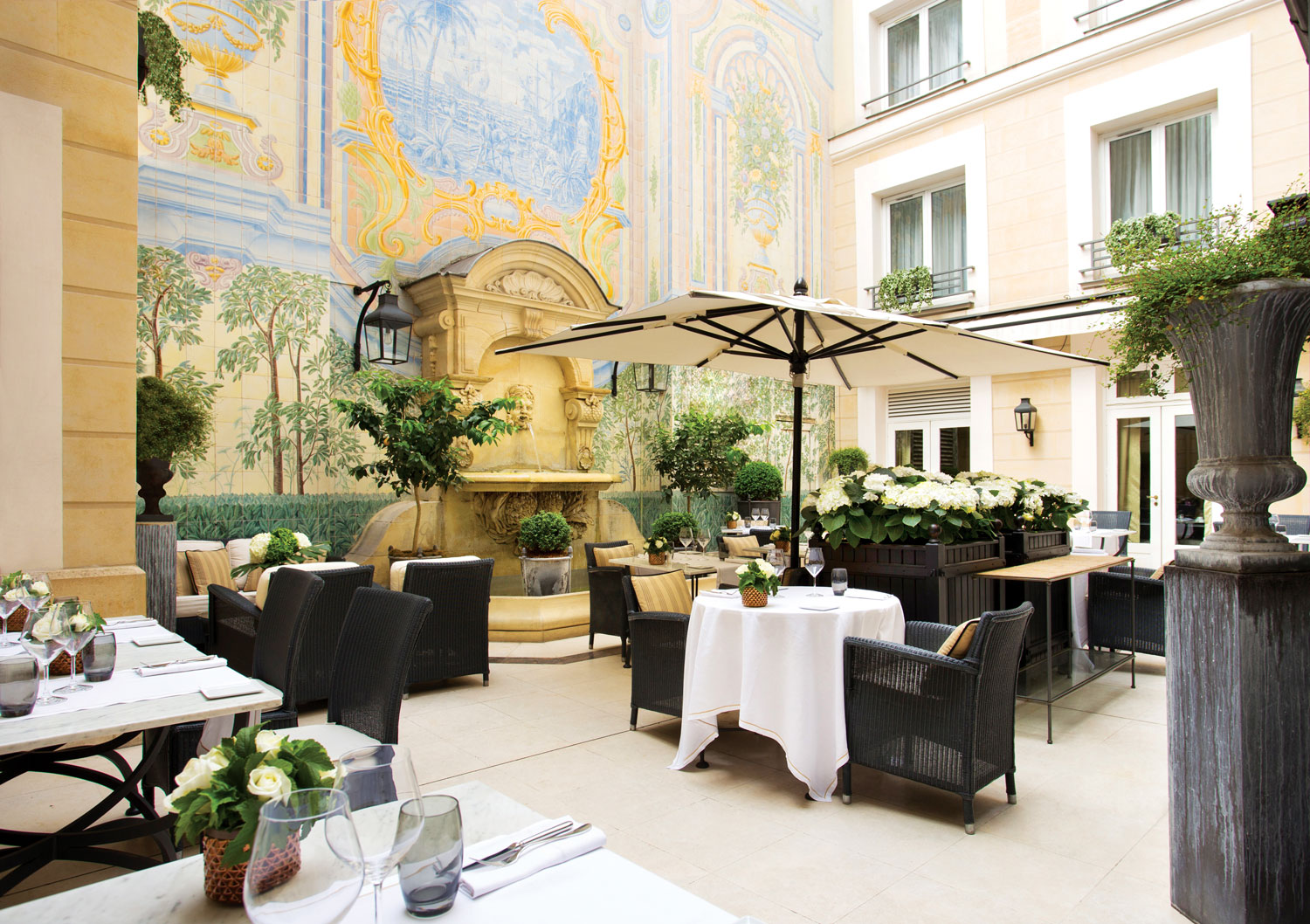 As self-proclaimed “last-minute” travelers, Zena and Tank booked their honeymoon vacation just one week before their departure date. Initially wanting to visit the Amalfi Coast in Italy, they discovered most of the hotels were booked, so they instead chose to travel to other destinations they had never been before. For the first leg of their journey, the newlyweds visited Castille Paris, a five-star hotel in the heart of the city, known for its Italian style and prime location next to exclusive boutiques. 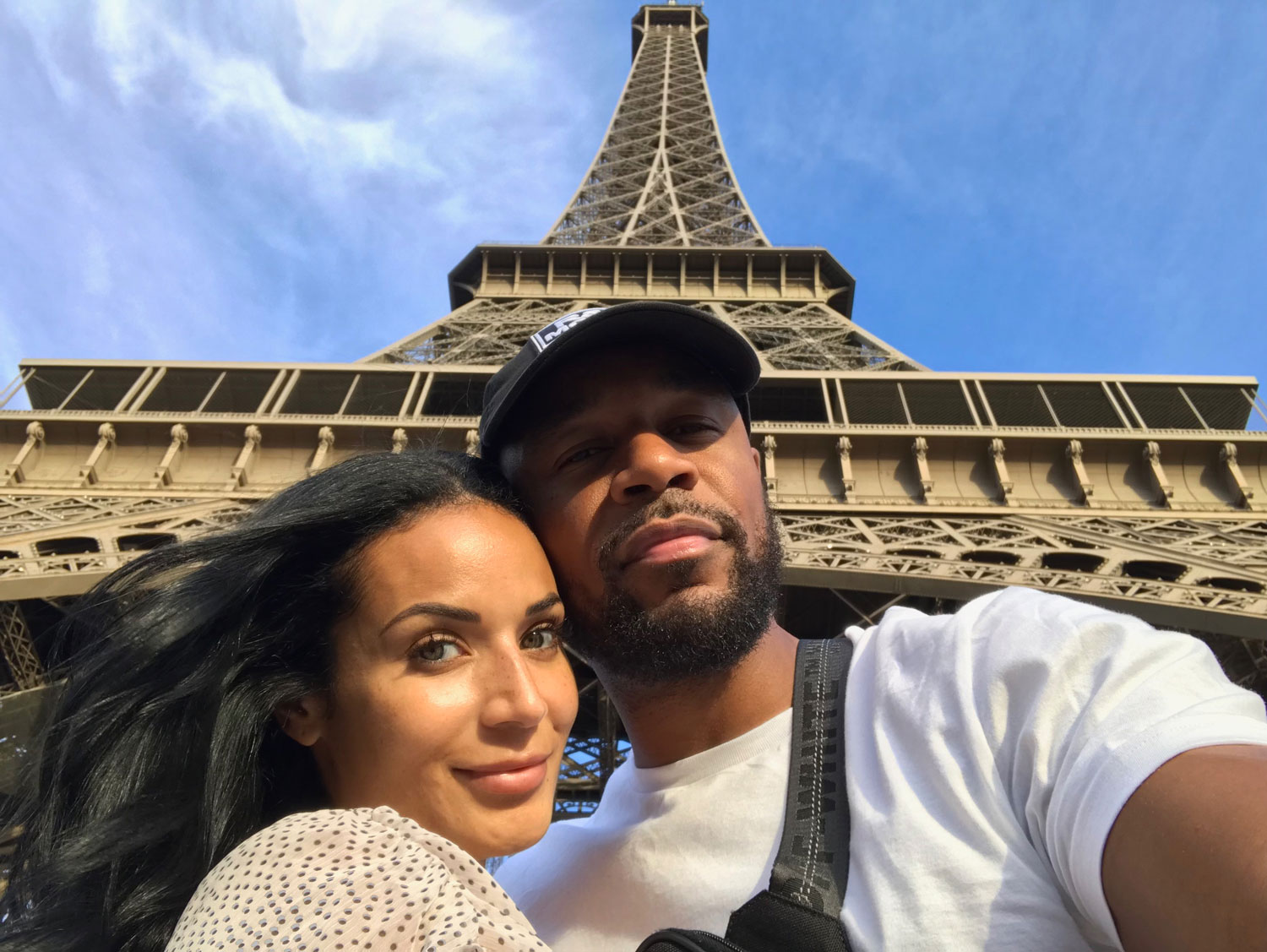 Though they admit they spent the first couple days of their five-night trip catching up on sleep due to jetlag, Zena and Tank made sure to visit popular tourist sites, shop, and enjoy both high-end restaurants and local favorites. “I’m a foodie,” confides Zena, “so eating was my number one priority while in Paris.” With a long list of recommendations from friends, the couple was thrilled to discover two restaurants that were so delicious they ate there on multiple occasions. “Ferdi had great burgers, churros, and the best chicken curry,” explains Zena, but “Babylone Bis was our number-one spot in Paris. It’s a hole-in-the-wall African restaurant that Beyoncé and Jay-Z love, too.” Another must-try eatery, shares the couple, is L’Avenue, which is perfect for lunch while shopping along the Champs-Élysées.

Adding love locks. “Though the locks have been removed on Pont des Arts, the tradition has started again on Pont-Neuf.”

People watching at Hôtel Costes. “The atmosphere is so cute, and the food is amazing too!”

Dancing the night away. “We went to a local club and had such a ball dancing and singing; it was cool to let loose and relax after the stress of wedding planning.” 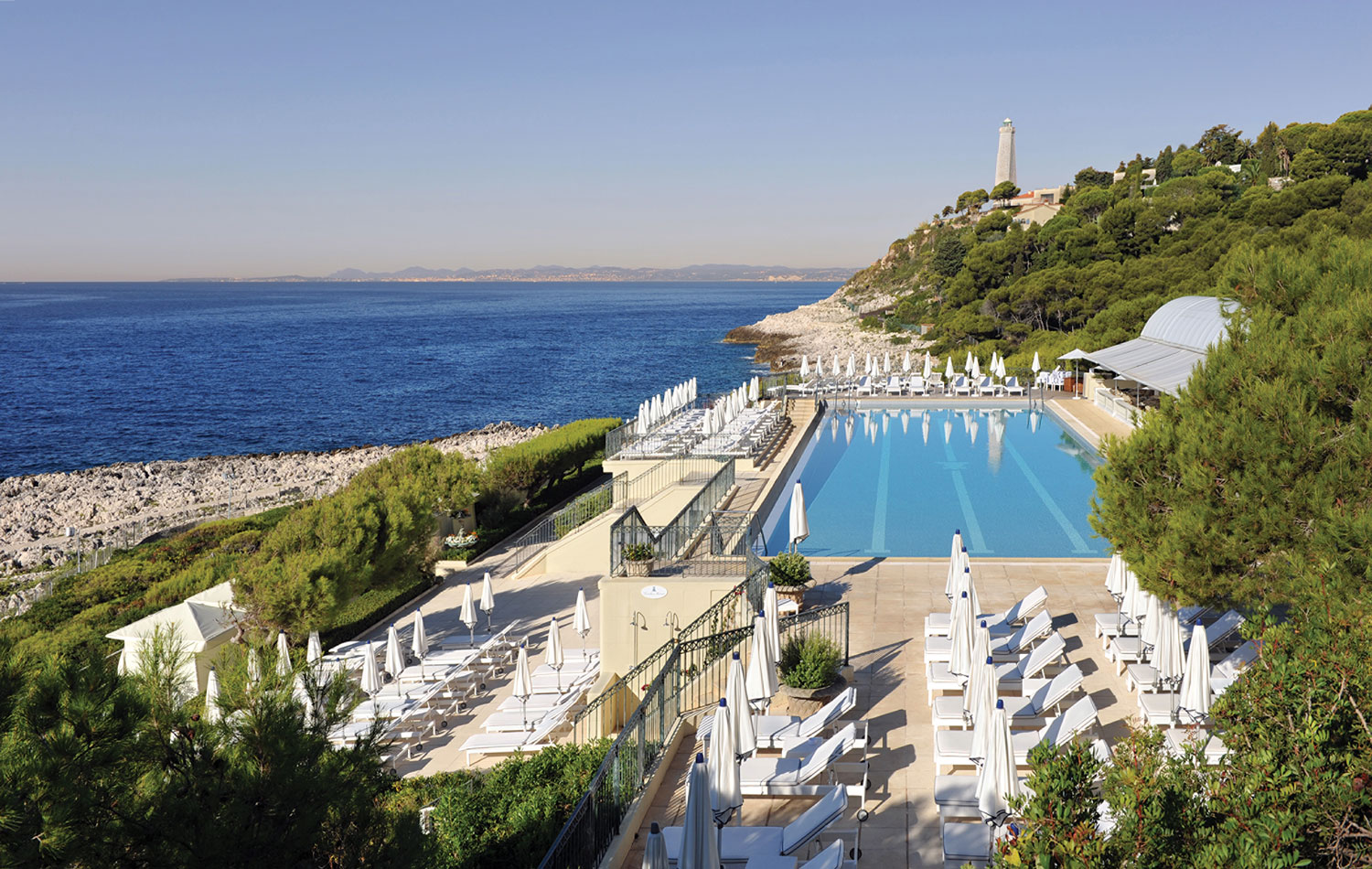 After a memorable experience in their favorite city of the entire trip, the newlyweds flew into Nice to explore the South of France. “We had seen so many photos on social media of friends at the Cannes Film Festival and couldn’t wait to visit the area ourselves,” says Zena. They stayed for three nights at Grand-Hôtel du Cap-Ferrat, A Four Seasons Hotel, which is set between Nice and Monaco and overlooks the Mediterranean Sea. “The view on the French Riviera was unmatched – the water was a beautiful navy blue and looked crystal clear!” remembers Zena. “We would definitely recommend the hotel to other travelers. The service was absolutely amazing, the room was super cute, and they had the best pool ever.” 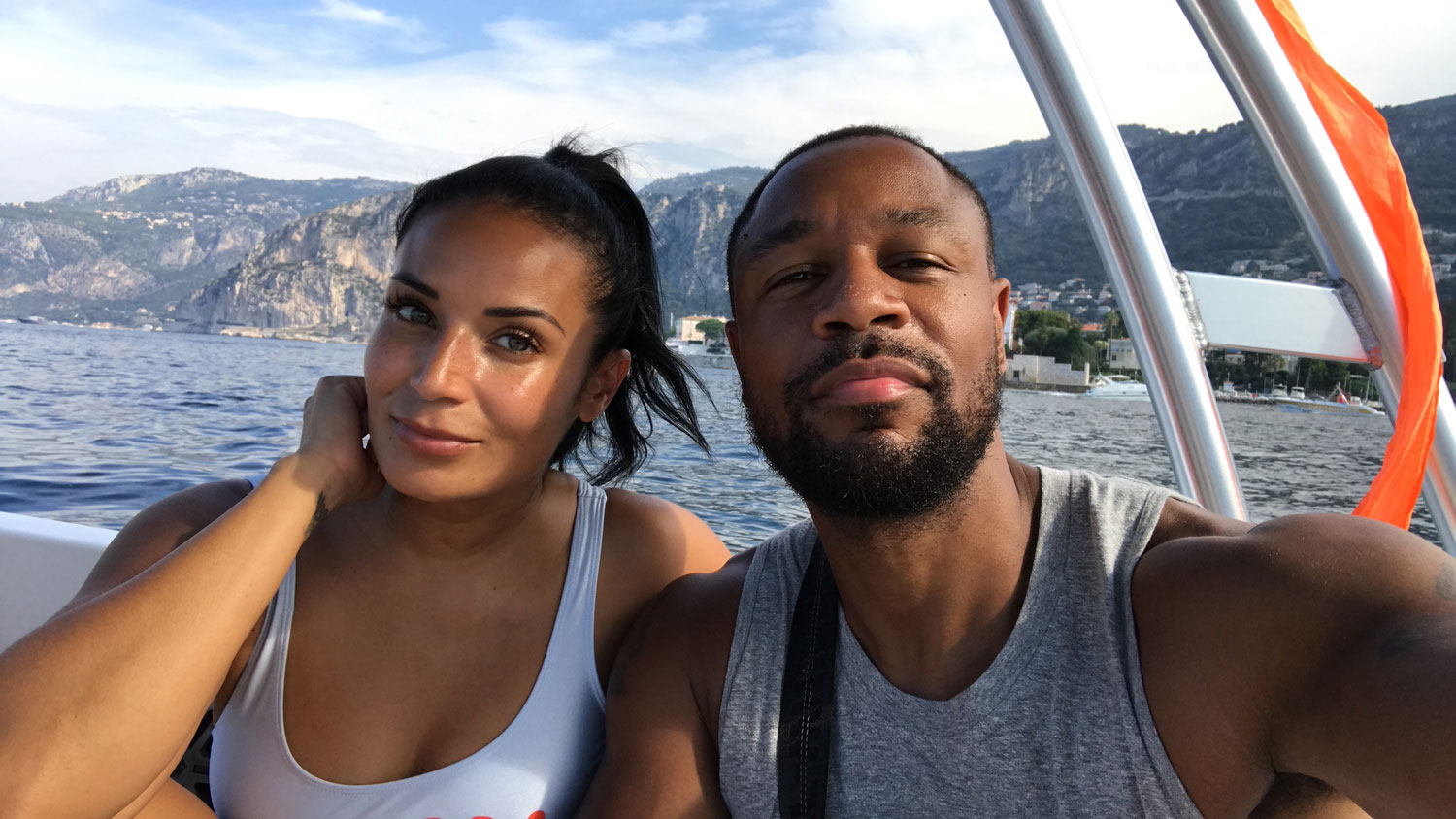 The Côte d’Azur property also provided the couple with easy access to the activities they were excited to try, including jet skiing, waterskiing, and playing roulette at the famous Casino de Monte-Carlo. Though they loved every part of their time in the South of France, Zena does warn travelers that the downfall lies in the bugs and mosquitos. “No one tells you about the mosquitoes… Bring the bug spray!” she urges.

Relaxing by the pool. “The pool is amazing! It’s filled with seawater and overlooks the rocky coastline.”

Being on the water. “We rented jet skis and waterskied while looking at incredible yachts along the French Riviera.”

Dining on the property. “They have three restaurants and a terrace bar. The food was delicious!” 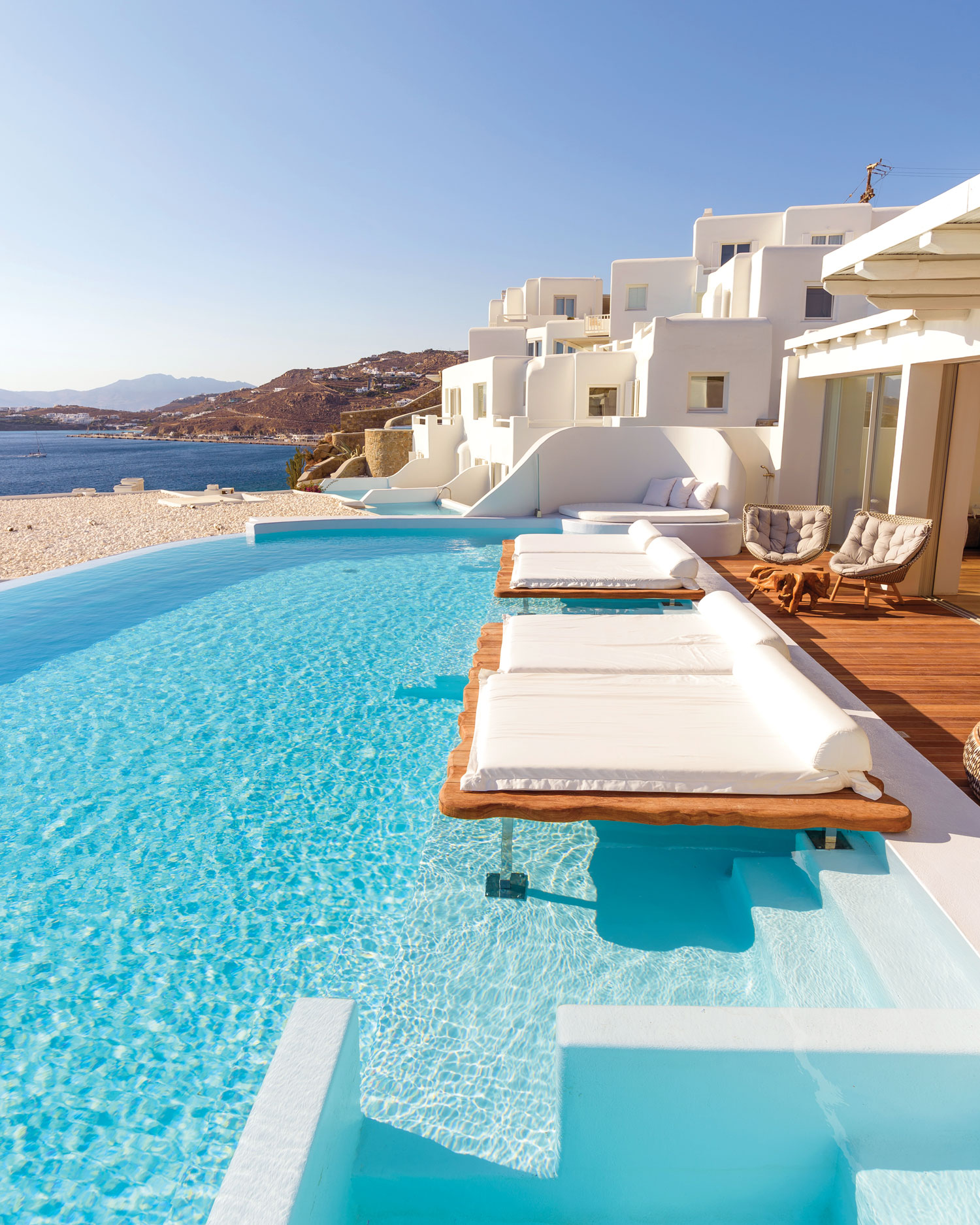 After a week in France, Zena and Tank traveled to Greece in order to spend the last week of their honeymoon in pure bliss. They checked into Cavo Tagoo Mykonos for three nights, citing the destination as their favorite hotel of the honeymoon. “It was amazing – the property, the room, everything!” exclaims Zena. Choosing not to book any activities in order to focus on relaxing and exploring the island, the pair was able to find a few gems. “The hotel recommended a few places that were within walking distance, had great atmospheres, and amazing live performances,” says Zena, also warning travelers to be prepared for the winds common to the island. Another favored hot spot was Scorpios, which features fire pits, a beach club, and an open-air restaurant. “It’s a must-go-to place!” she affirms. 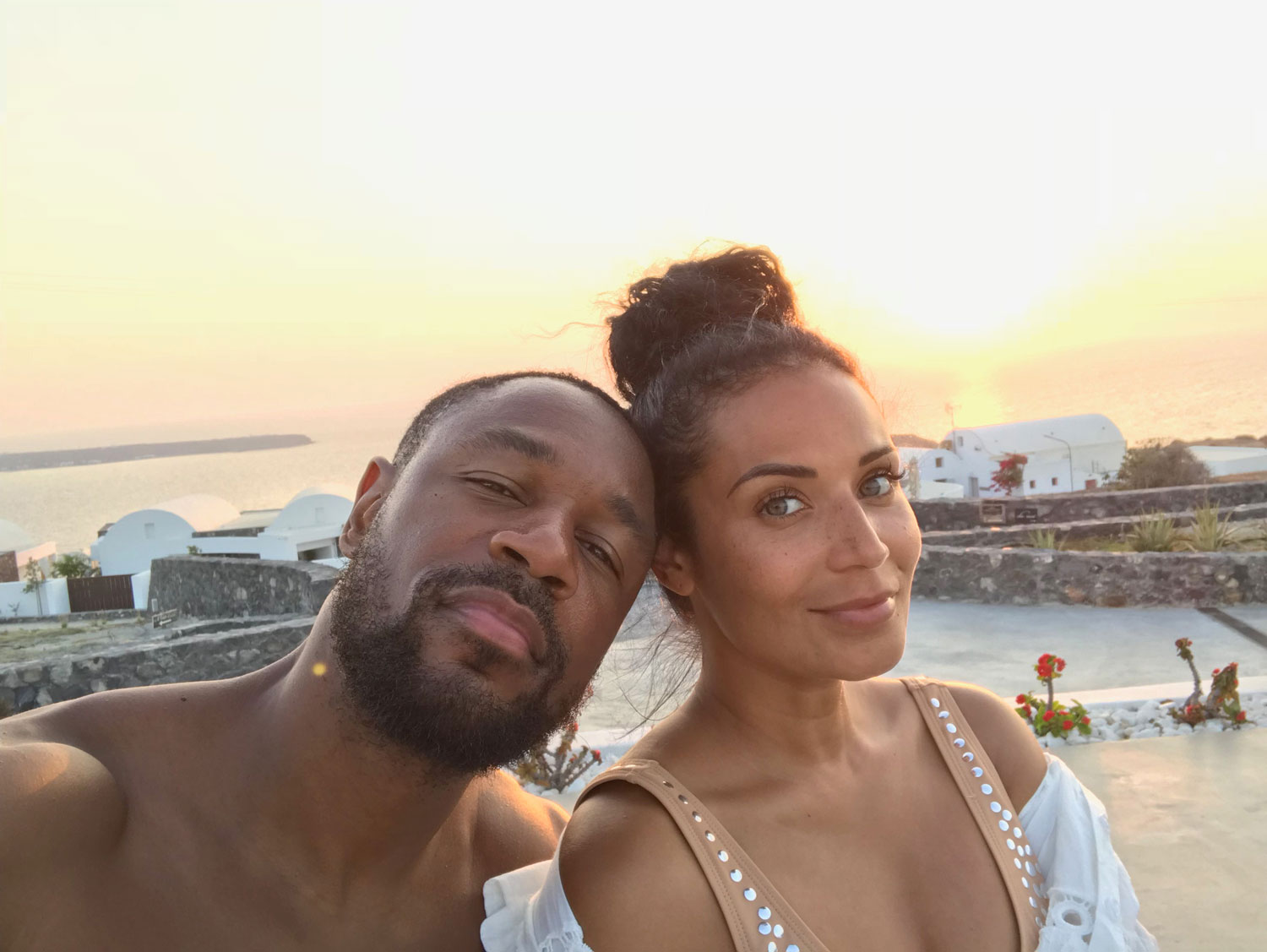 Since they’d seen gorgeous photos of the cobblestone streets and whitewashed buildings built into the cliffside that Santorini is known for, the couple knew they wanted to add the destination to their itinerary. They spent three nights at Santo Maris Oia Luxury Suites & Spa, a high-end property on the northwest edge of the island. “We loved that hotel!” confirms Zena. “It has more of a resort feel than the smaller properties built into the rock, and it’s also located nearby the perfect spot to get those gorgeous Santorini sunset views.” Since the pair had been traveling so much following a whirlwind wedding weekend, they were thrilled to end their honeymoon in a setting that welcomed relaxation.

Watching the sunset. “Scorpios in Mykonos is the number-one spot to make a dinner reservation to watch the sunset.”

Making friends. “We actually met a couple in Paris that we ended up hanging out with in Santorini. When we travel, we like to meet and talk to people.”

Unwinding. “With all of the traveling, we just wanted to end our trip in a relaxed state. Santorini is so romantic!”

Before flying back to Los Angeles, they spent one more night in Paris to eat at their favorite restaurant and enjoy last-minute shopping before a nonstop flight. Though they admit they missed their kids throughout the trip – and especially towards the end of the long journey – Zena shares: “We wouldn’t change a thing about our honeymoon – it was perfect!”

“Hire a travel agent! Kishia D’Addario of Ascot Travel did everything for us – flights, ferry, hotels, etc. She’s traveled to many of the destinations, so she was able to share personal recommendations for each place.”

“Ask locals for advice. We always try to look for the most popular local spots with the best food and atmosphere.”

“Pack less to make room for everything you purchase and want to bring back – especially when visiting Paris!”

“If you take the ferry from Mykonos to Santorini, splurge on the VIP package. The ship is nice, but the VIP ticket includes a private server.”

“Bring comfortable shoes for walking around Greece. Throw on some sneakers with a dress, go fresh-faced, and embrace spending time together with your honeymoon glow.”

For more travel and honeymoon advice, take a look at this real couple's month-long honeymoon to Japan, Bali, Singapore, the Maldives, and the United Arab Emirates, and get more ideas here.

What Makes Guests Cry at Weddings

6 Fun Ideas for Your Grand Exit