Now residing together in West Hollywood, CA, Courtney Martin Braun and David Braun were married in Atlanta in June 2006 (check out their wedding feature, “Night at the Museum,” at insideweddings.com). However, during their engagement, Courtney and David lived in separate apartments in New York City. They both had well-stocked living spaces, so necessity was not a motivation for registering. “We were looking to supplement the good stuff we already owned, replace things that could be switched out, and acquire unusual pieces we would never buy for ourselves,” says Courtney.

Courtney and David love to travel, and since they were fortunate to already own lots of basics for their home, they opted to add a honeymoon registry, Traveler’s Joy, to their more traditional list of registries: Crate and Barrel, Bloomingdale’s, Linens ‘n Things, and the Soho boutique, Moss. “We had always wanted to take a trip to the Greek Islands, and the Traveler’s Joy Web site was the perfect way to create an itinerary with flexibility and choices for our guests,” asserts Courtney.

Unlike some honeymoon registries that function as travel agencies, at Traveler’s Joy, there is no requirement to book a specific vacation using certain hotels, airlines, or packages; couples can book their honeymoon any way they like and simply post a description of their trip for their guests to see. Courtney and David listed the estimated price of certain activities they hoped to enjoy during their honeymoon in Greece, such as “wine tasting in Santorini,” which guests were able to purchase for them through the site. These financial contributions were kept in a bank account and sent to the couple by check when they requested it. “While I’m sure there are couples who take the cash and spend it on things other than their itinerary, we actually used it for our honeymoon and took pictures of ourselves doing each activity,” admits Courtney. “We sent each person who bought us a gift off the registry a postcard from Greece.” 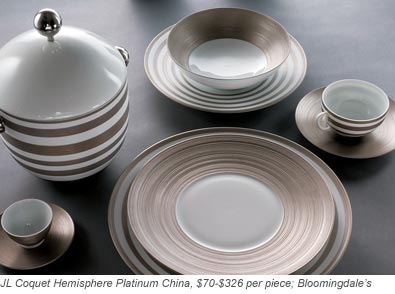 The rest of their registry choices fulfilled the different aspects of their domestic needs. Crate and Barrel provided them with a wide selection of housewares and home accents at various price points. Bloomingdale’s catered to Courtney’s wish for upscale china and bedding, and Linens ‘n Things offered the couple a chance to acquire items from one of their favorite designers, Nate Berkus, whose eponymous collection is sold exclusively through the chain.

Dealing primarily with unique design pieces, Moss’ registry provided the icing on the cake. “We wanted to pick out a few unique and memorable pieces, and Moss had the perfect selection.” The boutique also held all the couple’s gifts until they were ready to receive delivery. This service proved invaluable as Courtney and David were in the process of moving before the wedding; the gifts were kept safe and sound and out of the way until the two were settled in their new place.

Courtney and David created their more traditional registries in-store before updating them from time to time online. They started at Crate and Barrel, where David quickly became adept at the scanner gun. “It’s hard to explain the power of pointing a wand at an item and making it yours,” he jokes. “It was fun going through the process together,” adds Courtney. But she was surprised to learn that David had more opinions about their registry than she had assumed he would, citing his thrill over discovering the “perfect” bowls and ice cream scoop during his time wielding the scanner. He also took a surprising interest in china patterns. “I thought David would get bored looking at china [at Bloomingadale’s], but based on the experience at Crate and Barrel, I should have known better,” she chides. It was David who convinced Courtney to think outside the box –– and budget –– when it came to picking out their china pattern, and she’s glad he did.

But the urge to tweak the registries online was often too strong for Courtney to resist. “As I saw that guests had exhausted certain items, I added more things. It was addictive. But I had a blast!” The ability to access and edit registries online is an important and valuable tool in making sure that guests have adequate choices and flexibility. The same can be said for achieving an overall mix of different price levels and locations; variety and selection are crucial to gift-givers. According to Courtney and David, “We didn’t want our guests to feel like the registry was picked over or that there wasn’t enough in each price range. Splitting it up at several stores made people feel they had options.”

Not every part of the process –– namely dealing with returns, exchanges, and backordered items –– went as smoothly as others. When the couple tried to return gifts that arrived without a gift receipt, Courtney and David were given the lowest sale price (if the item had been on sale prior to the return date) instead of what the giver actually paid for it. When one registry lost a gift, the company required that the giver get in touch with customer service to haggle over a replacement. “We felt really bad asking our guest to do this after she was nice enough to buy us something in the first place,” explains Courtney. In another unfortunate case, a backordered item that was sent by someone who passed away shortly after purchasing it never made it to the couple. Because an email alerting the giver to the status of the item went unanswered, the order was automatically cancelled. Despite the couple explaining the special circumstances to the store, the company refused to reinstate the gift. “I was frustrated because I knew my friend’s mom really wanted us to have it,” says Courtney.

But Courtney and David did have many favorable experiences, particularly at Crate and Barrel, with customer service representatives and salespeople who “bent over backwards” time and time again. Plus, while most registries only offer store credit for returns, Crate and Barrel will refund a registry purchase in cash. 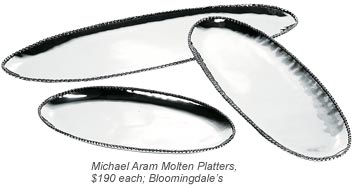 It is difficult to know for certain what kind of experience you will be in for when choosing a certain registry, but by educating yourself ahead of time about a store or site’s return policies, delivery services, inventory, and fees (if any), you can approach the process much more prepared. Asking other engaged and recently married friends about their experiences is probably the best way to judge whether a certain registry is right for you. And always keep your gift receipts to ensure you will receive the true value of your gifts should you need to return them.

With so much thought put toward their registry strategy, were there items that Courtney and David missed? “We picked out very basic wine glasses that we can use for everyday, but in retrospect, I realize that I’ll never buy the crystal ones for myself. I should have registered for them when I had the chance,” says Courtney. The crystal stemware would have complemented their entertaining arsenal in the long run, more so than the multiple sets of coffee cups and saucers they felt obliged to include because they matched their everyday dishware. “Now they just take up room in our cabinets.”

Looking back, David would have also taken the attention to detail they paid toward outfitting their kitchen, bedroom, and dining room and applied it to other parts of their home, such as requesting a greater number of pieces for their living room or items for improving their yard. “We could have registered for help building a patio with a grill, plants, outdoor lighting, etc.”

The one thing they both agree that they would have never changed was the decision to utilize a honeymoon registry. “One of the coolest things about our honeymoon registry was to be able to think about the guests who had treated us to specific things while we were doing them,” says David. The registry was such a great experience that they should have added even more activities to the list, such as daily moped rentals. “That was easily the most fun activity,” remembers David. He goes on to explain, “Even though you are asking for a gift, it’s {honeymoon registry} experiential and less rigid. Your friends and family end up helping you fulfill a dream instead of filling a china cabinet.”

But he quickly adds, remembering his beloved scanner gun, “Don’t get me wrong; the dinnerware has been ‘clutch.’”

Lea Michele and Zandy Reich Had an Engagement Party!