Every year people look with fascination to see the haute couture outfits worn by celebrities at the Met Gala. However, this year it wasn’t just the outfits that surprised – rapper 2 Chainz proposed to his longtime love Kesha Ward on the red carpet! 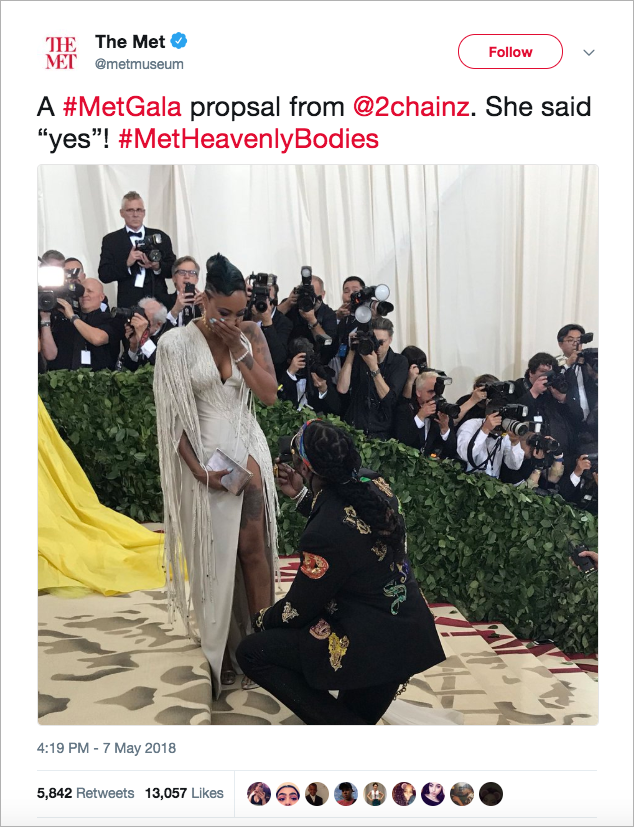 Though Kesha proudly showed off the ring, some fans were left confused. This isn’t the first time the rapper has proposed to his sweetheart. He popped the question at the 2013 BET Awards and reports state that the couple, who have three children together, were married later that year. Is it possible that this is a situation similar to Lisa Bonet and Jason Momoa? For about a decade fans thought the actors were already married, but it turns out they only officially tied the knot last fall. Could 2 Chainz be reaffirming his original proposal as a sign that he and Kesha should at last have a wedding for real?

If it turns out that the pair really has been married this whole time, we can only guess as to the motive of the proposal – until the man behind it says otherwise. The most likely scenario is that he felt it was time to upgrade the ring of his beloved wife and thought it would be extra special to propose all over again. Should this be the case, we sure hope there will be an extravagant vow renewal in their future!

Learn more about the engagement between Matthew Lawrence and Cheryl Burke and discover details about Tom Hanks and Rita Wilson's 30th anniversary party!