Wedding season is in full swing! After getting engaged earlier this year, Chris Pratt and Katherine Schwarzenegger are now husband and wife! Though it has not been confirmed, our staff speculates that the romantic nuptials were designed by celebrity planner Mindy Weiss and photographed by John and Joseph Photography.

The newlyweds shared the news on their respective Instagram accounts by posting the same photo with nearly identical captions. The stunning bride wore a figure-flattering sheath gown with a modified sweetheart neckline and lace details by Giorgio Armani. The otherwise slim silhouette was accented with a voluminous train. Katherine wore a classic fingertip veil affixed to her hair, which was styled in soft waves. The groom was dapper as ever in a navy suit by the same designer paired with a silver tie and pocket square. 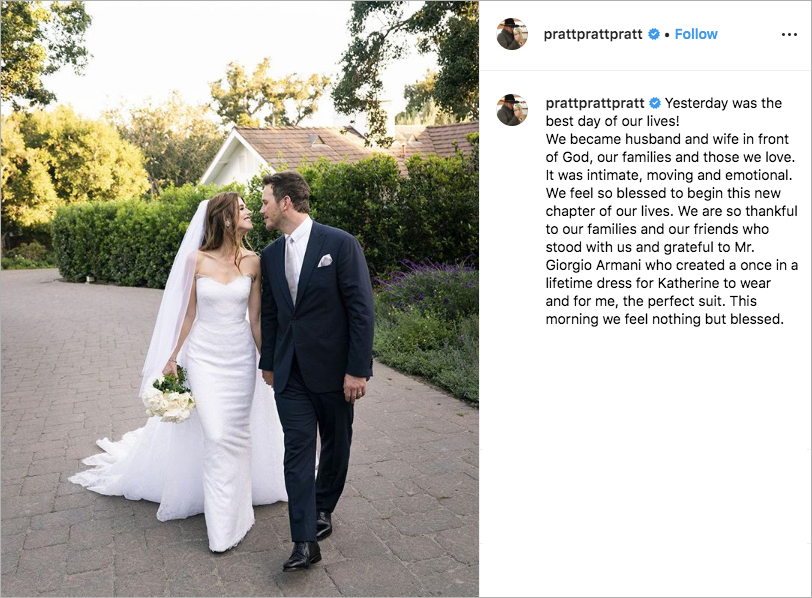 People magazine reports that the intimate wedding was held at San Ysidro Ranch in Montecito, California. Naturally, Katherine’s famous family – parents Arnold Schwarzenegger and Maria Shriver, along with siblings Christopher, Christina, and Patrick Schwarzenegger – were in attendance, as was the groom’s son Jack. According to Yahoo News, the six year old was able to celebrate with both his parents, as his mother (and Chris’ ex-wife) Anna Faris was at the ceremony. Many of the groom’s costars from his time in Marvel movies commented on the Instagram announcement with congratulations, but it was his Parks and Recreation costar Rob Lowe who made the guest list. He attended along with his sons Johnny and Matthew.

Learn more about the wedding of Charlotte Casiraghi, granddaughter of Princess Grace of Monaco, and read more about Sophie Turner and Joe Jonas' wedding.

The Pros and Cons of Choosing Your Own Engagement Ring