There was another royal wedding! Though Charlotte Casiraghi of Monaco does not officially hold the title of “princess” because her mother, Princess Caroline, chose to not give her children royal titles at birth, Charlotte is 11th in line for the throne of the principality located between France and Italy. The bride’s grandmother, Princess Grace, of course rose to fame as the actress Grace Kelly before marrying Prince Rainier III in 1956. 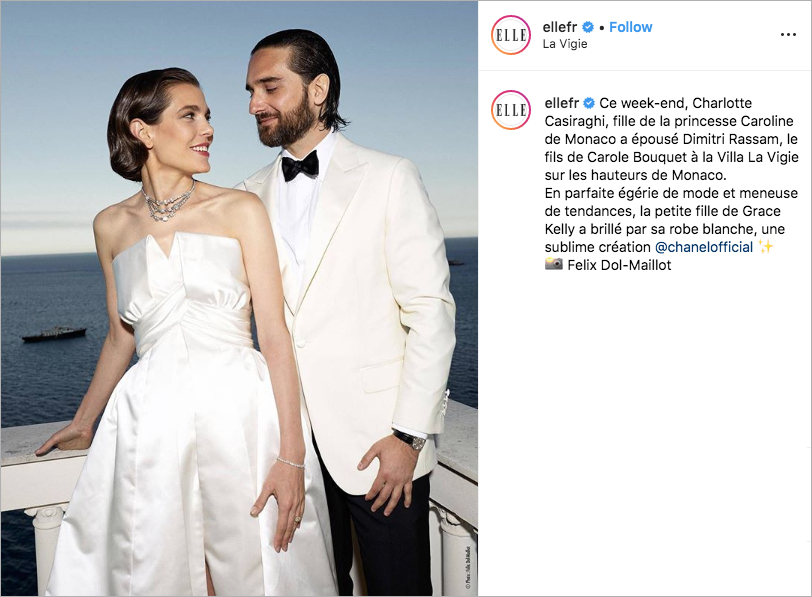 Though Charlotte sadly never knew her grandmother – Princess Grace passed away in 1982 – she was still able to honor the screen legend through her ensemble. People reports that at the reception the bride wore a stunning diamond necklace that her grandmother received as a wedding present. The necklace complemented the satin white gown with a folded bodice. Earlier in the day, Charlotte and film producer Dimitri Rassam tied the knot in a civil ceremony at the palace. Though Princess Grace’s ball gown from her church ceremony is one of the most iconic wedding dresses of all time, eagle-eyed fans noticed that the bride’s grey brocade frock looks to be inspired by her grandmother’s bridal suit during her own civil ceremony – which was separate to the elaborate Roman Catholic church service that captured the world’s attention.

Preview the Winter 2019 Issue of Inside Weddings Magazine