They may have legally tied the knot in February, but supermodel and host Heidi Klum and former Tokio Hotel guitarist have now celebrated their union with a lavish yacht wedding off the coast of Capri, Italy. Among the guests were of course Heidi’s children as well as Tom’s identical twin brother Bill Kaulitz, reports People magazine. The outlet also reveals that the luxury yacht in question – Christina O. – has been home to some rather famous receptions in the past. The yacht was previously owned by Aristotle Onassis, and it is not only where the celebration of his wedding to Jacqueline Kennedy Onassis was held, but it was also host to the wedding reception of Princess Grace Kelly to Prince Rainier III of Monaco. 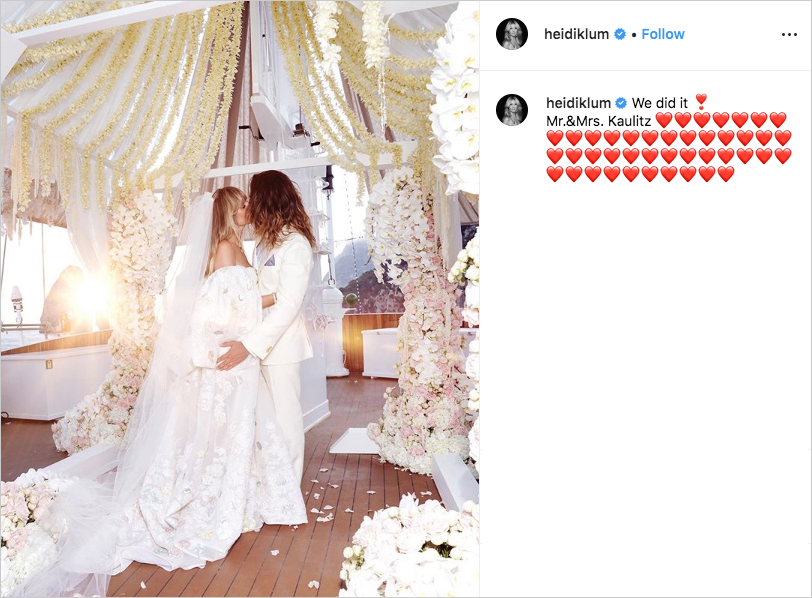 In the photo the bride posted on Instagram, the newlyweds kiss under a canopy of orchid garlands among an abundance of flowers in shades of white and pink. Heidi wears a billowing bridal gown with voluminous off-the-shoulder sleeves and floral appliqués throughout the dress, her blonde hair accented with a cathedral veil. The groom donned an ivory suit with a blue shirt and pocket square, leaving his long brown hair worn down.

For more celebrity news, see photos from the Italian wedding of star athletes Caroline Wozniacki and David Lee, and learn more about the nuptials of Grace Kelly's granddaughter, Charlotte Casiraghi.