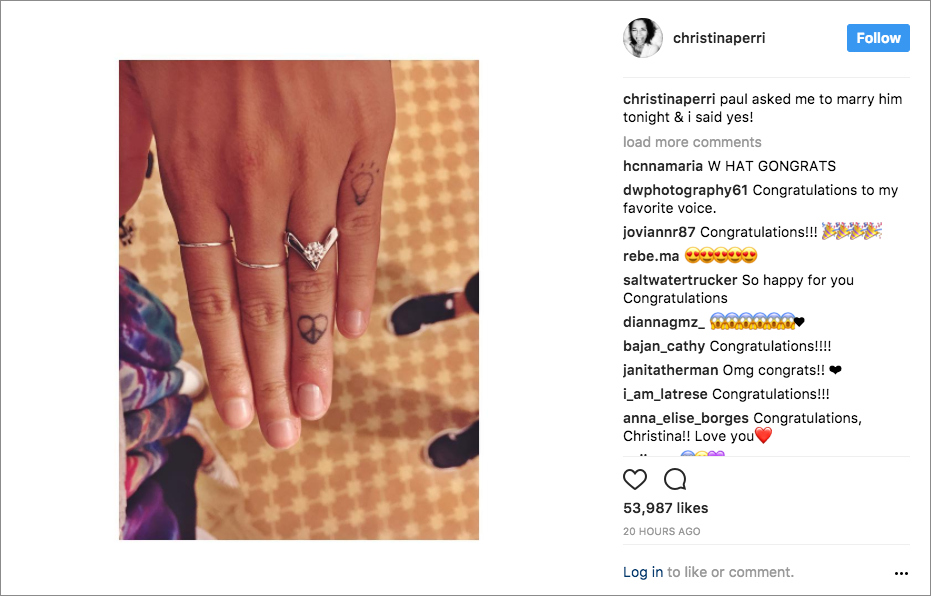 Singer Christina Perri recently announced her engagement to Paul Costabile via a photo of her ring on social media accounts. The pop singer’s alternative style is evidenced in her new bauble, which features a round diamond resting in the point of a chevron-shaped setting. Christina actually met her beau when he interviewed her. Paul hosts “On the Fly with Paul Costabile” for iHeartRadio and shares a bit of how the pair got together in his own Instagram post.

Christina Perri’s biggest hit is easily “A Thousand Years” – which gained massive popularity due to its use in The Twilight Saga: Breaking Dawn - Part 1. Since its release, the song has been a staple in weddings, both for the first dance and walking down the aisle. If you love this tune but want something less common for your big day, we’ve made a playlist of “A Thousand Years” and 10 similar songs that would also be beautiful in a wedding – including the duet version of the track that Christina sang with Steve Kazee for Breaking Dawn - Part 2.

For more wedding inspiration, read an interview with actress Carlson Young about her engagement and discover father-daughter dance song options from movies.

Why Live Event Artists Are Still a Hot Trend

The Rules for Creating an Epic Wedding Video