Love is in the air! Just about this time last year, Katy Perry and Orlando Bloom got back together, and now the couple is engaged! The actor presented Katy with the ultimate Valentine’s Day gift in a room filled with red heart-shaped balloons. The singer-songwriter’s new engagement ring is a true stunner: the center stone appears to be either a vivid pink diamond or sapphire, surrounded by bezel-set diamonds to form a flower shape, set with a band of classic yellow gold. In the photo sharing the announcement, which only shows the top half of both Orlando and Katy’s faces, we see that the bride-to-be’s pink manicure to celebrate the holiday coincidentally coordinates with the ring as well. The pop star captioned the photo with “full bloom” – which alludes to both the design of her engagement ring and her soon-to-be husband’s last name. Orlando posted the same photo, but his caption read “Lifetimes” – which the sweethearts now plan to spend together. 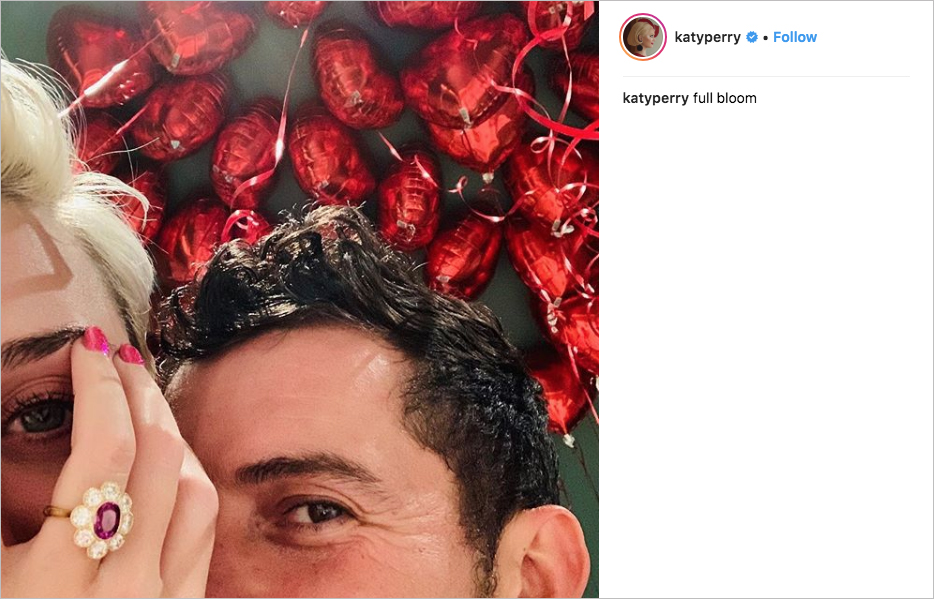 Though the couple had previously split after a year of dating, they remained close friends during the separation. This seems to have made them even stronger as they appear happier than ever. Most recently, they were spotted leaving Jennifer Aniston’s famed 50th birthday party on the back on Orlando’s motorcycle. Naturally, the lovebirds have many celebrity friends, several of whom wished the newly affianced pair congratulations on social media. Dua Lipa, Zedd, Kate Hudson, Zoe Saldana, Jessie J, Tinashe, Gwen Stefani, Courtney Love, Poppy Delevigne, and Katie Couric were among the stars to send their well-wishes through Instagram comments. Kate Hudson specifically suggested to Katy (whose legal last name happens to be Hudson) that the pair have a destination wedding. We’ll just have to wait and see what the happy couple decides!

Your Guide to Saving the Top Tier of Your Wedding Cake