It looks like Daryl Sabara is “All About That Bass” – the actor best known for the Spy Kids franchise proposed to pop star Meghan Trainor on her 24th birthday. As the singer was born right before Christmas, it’s both a classic holiday proposal at the height of engagement season and a birthday betrothal.

Though neither Meghan nor Daryl posted a ring picture, they did share a darling video of the big moment on Instagram. From what we can see, the ring appears to be either an oval- or pear-shaped diamond – both very hot trends at the moment.

The video, which was created by the future bride’s older brother, shows Daryl on one knee while Meghan enthusiastically accepts. Soon they are hugging friends and family under the tunnel of twinkling lights. Fittingly, the soundtrack to the video is Meghan’s song “Hopeless Romantic” – perhaps that will be their first dance tune as well? Although we’re certainly partial to her duet with first-dance mainstay John Legend as well, “Like I’m Gonna Lose You.” Though it is still too soon to know any of the couple’s wedding details, Daryl may have an idea of married life with his beloved thanks to her playful song titled “Dear Future Husband.” 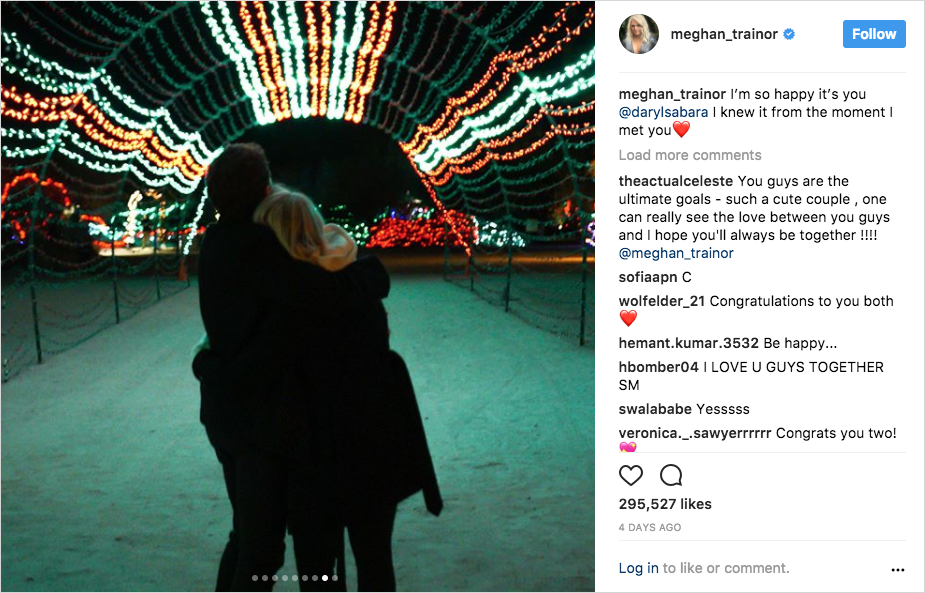 The same day she announced her engagement, Meghan posted a series of photos with Daryl taken throughout their year-and-a-half long relationship. The couple has been very open about their courtship on social media since they first went public with their love. As for the guest list of their wedding? Actress Chloë Grace Moretz should be a given, as she’s the one who introduced the pair.