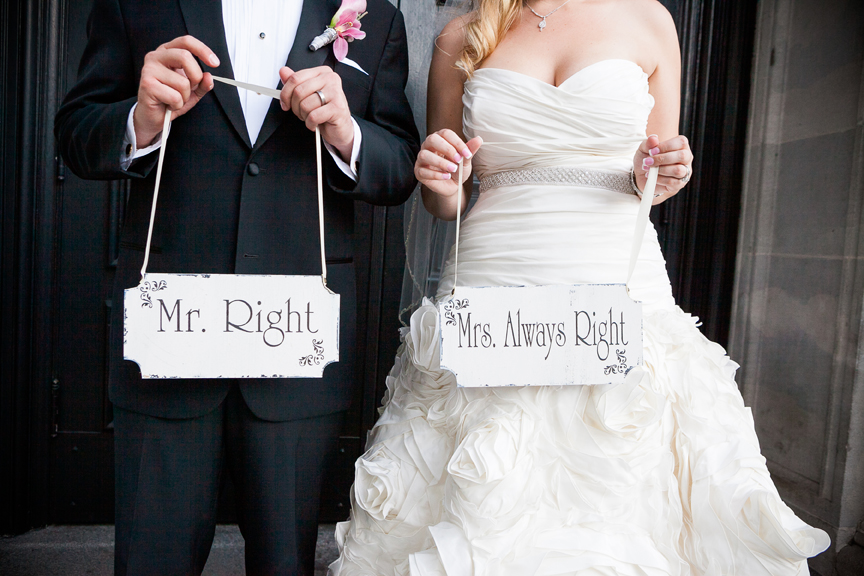 For the sake of full disclosure, I should tell you that I am not married. I have never been married. Nor have I been engaged, although this one time, I did look up how easy it would be to get a marriage license in the state of New Hampshire, where I do not live.

I have been a groomsman now at four weddings, have given toasts at three and am currently watching my younger sister prepare for her upcoming nuptials. In the total tonnage of weddings I have witnessed -- from best friends to cousins to acquaintances to total strangers -- I have come away knowing there is one rule, and one rule only, that men should follow.

It’s a rule I discovered at my best friend Matt’s wedding. We were all 22 at the time, fresh out of college. After the ceremony, as we danced and drank and male bonded, a group of us cornered the groom:

“Well,” he said, leaning in conspiratorially, “It’s not so much whether it’s a big deal or not a big deal; it’s a big deal. You need to be ready. But the one thing I can tell you is this,” he paused, and we all leaned in closer. “From the time I proposed to the moment I said ‘I do,’ I had no thoughts whatsoever. Actually, it’s not that I didn’t have thoughts, but no one seemed very interested in them. I was not asked my opinion, my real opinion, one time. I had no input aside from what I was expected to say. This was not about me.” And he smiled.

And this is exactly how I’ve approached the past year; the year of my little sister, the year of the bride. It seems a reasonable idea; I want her to feel like Lady Di, and then after the turmoil, when life is normal once again, we can return to our regularly scheduled relationship. I’ve been prepared to support her in all things this year, save one.

A few months ago over dinner, I asked her about her dress.

“I’m not telling,” she replied, ear-to-ear teeth in a huge smile. “But we did pick the tuxes.” My ears perked. I’m one of the groomsmen. I was ready to hear what James Bond attire I would be donning. “The men are wearing tails.”

So, not so much dapper James Bond as toothy and stiff Prince Charles. Same country, yet worlds apart.

Women think men look distinguished in tails, but men look down their fronts and think, ‘Where the hell did my jacket go?’ Here is a little known secret: We look freaking stupid in tails. What’s worse, we feel stupid, too.

My first response was to feign extreme eagerness. “That is so cool!” I enthused. “And if we’re going to wear tails, can we go the whole nine? Top hat? Cane? Gloves? Just imagine...” If I could make the image as silly as possible, create the picture in her head of future-groom-as-Mr. Peanut, surely she’d come around to see my side of things.

She brushed off my efforts as casually as one bats a fly from her face. “What are you, joking?” Apparently.

I then decided to appeal to her sense of fairness. “Shouldn’t your husband get to choose what he wears?”

“He wants to wear tails,” she said. I looked over at her fiancé, who to this point sat eating quietly.

He raised his hands in surrender. “Apparently, I want to wear tails.”

“You want to wear tails?” her tone leaning toward fact, away from question.

“Listen,” I interjected, moving quickly, “you know how you’ve always had an image of this day in your head? You always pictured yourself looking beautiful, right? Don’t you want your future husband to feel just as good about how he looks?”

“He will,” she countered. “He’ll be wearing tails.” After weeks of attempted subterfuge and sabotage; misdirection and covert action; after weeks of sending her e-mails of penguins with captions that read “on your wedding day,” all it took was playing dress-up.

My father, future brother-in-law and sister all went to the tuxedo shop. She carefully explained to the woman what she was looking for; the woman in the store sighed happily. The two men standing behind my sister looked like prisoners headed to their execution, but they dutifully went behind the curtains and came out at the same time, dressed for viewing.

In the year and a half since my father’s knee replacement surgery, he has been more sedentary than he’d like, expanding in the waist as his knee healed. But even her fiancé, who is considerably younger and in understandably better shape, looked dejectedly at his reflection. “I look like a penguin,” he said.

“At least you don’t look like Danny DeVito,” my father grunted.

Sitting on an ottoman in the middle of the room, my sister glared at them both, seemingly blaming the men and not the ridiculous outfits.

And with that, a crisis was averted. I have been fitted for a wonderful tuxedo coat, vest, and tie. James Bond is back. And as I look forward to the wedding, one thought runs through my head: This is my sister’s year. Anything I can do to make this the easiest and most memorable year of her life, I’ll do it. Anything at all.

Get Guests Mixing and Mingling (Even If They've Never Met!)

How to Improve Your Vacation with Social Media