Proposing marriage is a long-lasting tradition that can be incredibly elaborate or simple and low key. No matter the way the question is popped, it will last forever in the couple’s memory. After getting engaged, you’ll likely be faced with people repeatedly asking to hear the story of the proposal. In fact, we asked recently married brides who graced the pages of Inside Weddings to share the tales of the moment they said yes. Read the romantic stories below, and click on each bride’s name to see how their eventual wedding turned out! 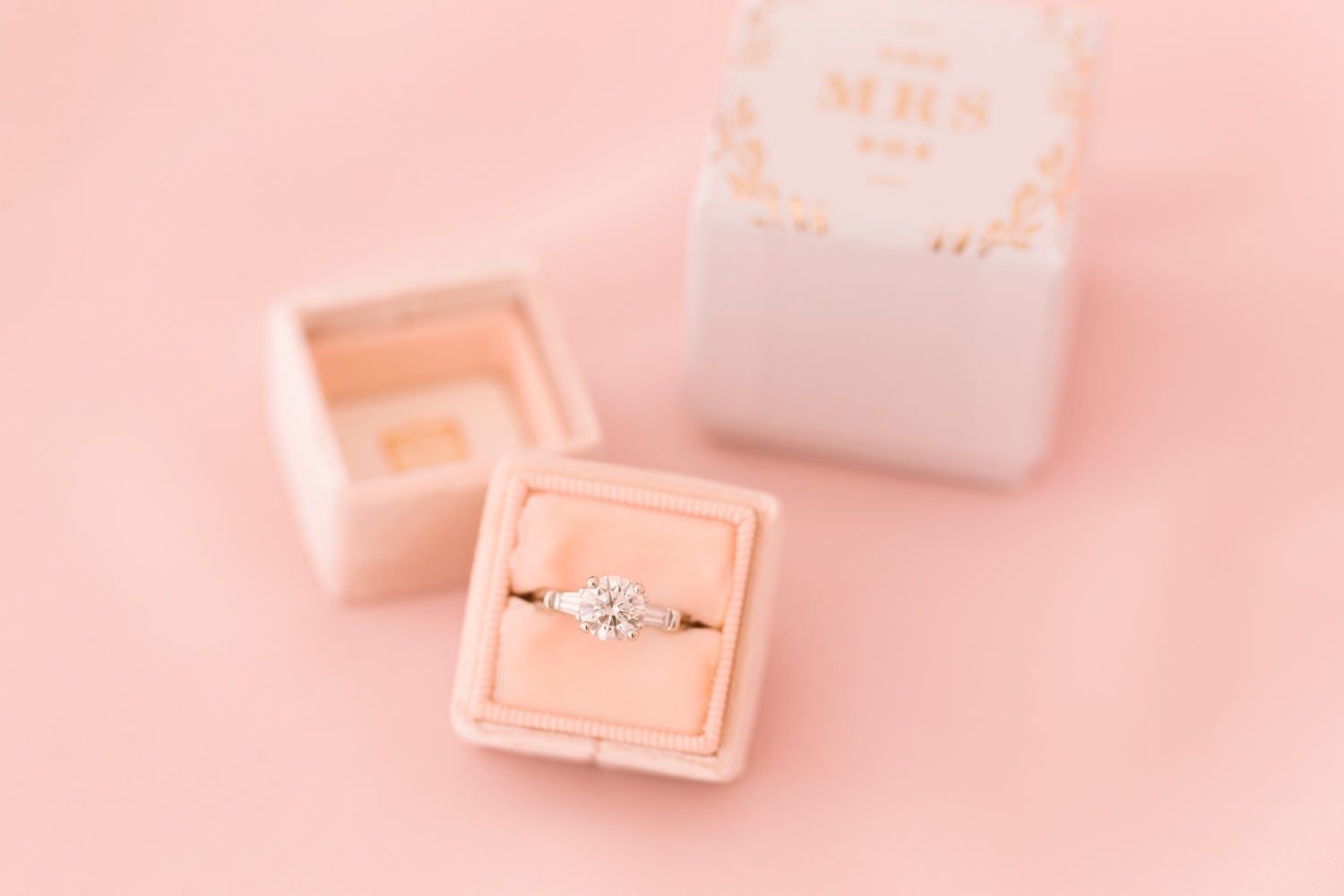 “Cody knew that it was imperative the dogs were a part of the proposal. One evening, Cody had Toby (our shihpoo) on his lap on the balcony of our DC apartment and told me to come outside. The ring box was attached with Velcro to his collar!” - Sarah

“In October we were walking along the Brooklyn promenade with all the beautiful fall leaves and amazing views of the city and Andrew got down on one knee and asked me to spend the rest of our lives together. We then went to a great restaurant afterwards to celebrate!” - Sarah

“We took a quick trip to Catalina Island. It felt like any other day so I didn’t feel suspicious in the slightest bit. After dinner, we decided to take a photo under the moonlight on the boardwalk. When I was getting ready for the photo, my now-husband went on his knee holding the most beautiful ring I’ve ever seen and proposed, while I had no idea the camera was recording the moment.” - Jordan

“Brain proposed on the first day of our trip to Cuba. We had spent the day exploring Havana in a blue ‘57 Chevy and then took the car down to the beach around sunset. We set up a big blanket and were laughing and soaking up our first day in Cuba. Brian set up his GoPro, which wasn’t unusual because he loves making travel videos on our trips.  He asked me to get up and I excitedly insisted we take jumping shots. I soon realized that he had much more than jumping shots up his sleeve, as he got on one knee and tears came streaming down his cheeks. Our driver followed us down to the beach, and was able to film the entire proposal and bring down a bottle of Champagne after the proposal. It was really special because in Cuba we didn’t have any cell phone or internet service, so we got to soak in the proposal for a few days before we came home to share the news with our friends and family. A few days after our return, I was headed to Los Angeles and Brian ended up surprising me out there the following day and throwing a surprise engagement party with our friends and family.” - Danielle

"The proposal took place at my favorite restaurant. I’ve always been obsessed with Japanese food and design. Stuart knows this and chose the most beautiful, perfect setting. All that unfolded that night, down to the last detail, was just so very us. When we arrived, he took me up to the rooftop of the building, got straight to the point and popped the question - after writing an entire (precious) speech - and forgetting it all. He so wonderfully and adorably just asked. (And after reading the speech he had planned, I completely understood as it was way too sweet to ever say out loud without bawling ¬– but that, of course, didn’t prevent the tears.) After a solid happy cry, we headed back down for a beautiful private dinner and spent the meal laughing as I then had my first response to the ring - realizing I hadn’t even looked at what was now glistening on my hand until this point. After dinner, the staff requested we head back up to the rooftop where a ‘private dessert' was waiting in celebration for just the two of us. I, of course, unsuspectingly agreed and made my way to the elevator. Completely unaware of what I would step out to find, we made it all the way to the top, until I looked at Stu and simply said, ‘I hear people.’ As the doors opened, truly to my complete surprise, I saw all of our best friends and family waiting, arms open wide.” - Emily

“Cory planned a beautiful dinner at the location of our first date. (For which I made us 30 minutes late.) Neither of us can remember what he said because we were so caught up in the moment. Cory designed the ring setting with help from one of my close girlfriends, but the center stone is an heirloom diamond from my mother’s engagement ring. He followed up with an incredible surprise party with those nearest and dearest to us, even though I changed the date of my availability only two days prior.” - Kathryn

“After telling me to be ready at 2PM on a sunny Saturday in May, Brian drove us from our apartment in San Francisco to the surprise location of Carmel-by-the-Sea where we had an amazing dinner at a restaurant Brian had sweetly remembered my pointing out the prior year when we visited the area for our dating anniversary. After dinner, we drove along the coast towards Big Sur as the sun was setting. Pulling off at a viewpoint, Brian led me down a path and left me overlooking the ocean. A few moments later, a woman (who I later learned was a photographer Brian had hired to capture the proposal) came up to me with an envelope on which the words ‘Open Me’ and ‘Keep Walking’ were written. I started down the rose-strewn path to find three more letters Brian had written me. Each one held a meaningful date from our relationship, with the final one saying that day’s date as the day Brian “made the best decision of his life…” Brian was standing at the end of the path holding a beautiful bouquet of flowers in front of a gorgeous table set for two with Champagne and chocolate-covered strawberries. He was beaming with pride watching me walk toward him and I was in tears as he got down on one knee and asked me to marry him. It was the easiest question I have ever answered!” - Kollerer

“The actual in engagement took place on New Year’s Eve. Eric knew that I valued family and friends being present for all major life events. So he secretly invited all of my friends and family (local and from North Carolina) to surprise me in Los Angeles. My 30th birthday was on January 2nd, so the idea was to have a surprise "birthday" party then propose at some point during the party. The birthday party would then change into an engagement party. I had NO CLUE any of this was happening.” - Moore

“Before bed every night, Ryan and I watch Friends. I work with my father, and he and Ryan planned a fake meeting to keep me at work until Ryan was ready. The “meeting” was cancelled last minute and I headed home. When I returned home from work, Ryan was there waiting for me. He had filled our apartment with candles, just like Monica and Chandler’s engagement. He first gave me a West Ham jersey (he is a diehard fan) that said Nikki Casson [his last name], and then got down on one knee and proposed. I was shocked! He planned a surprise dinner party with our family and closest friends that evening.” - Cohen

“Our friends hosted a Roaring ‘20s-themed Friendsgiving dinner party. Towards the end of the night, dressed in his Gatsby outfit, Josh got down on one knee and proposed. I was so surprised that I forgot to say anything until our friends started chanting for me to respond and I threw my arms around him and said yes!” - Gia

“During a family vacation to Bonita Springs, Florida for Christmas and New Year's Eve, Chris proposed to me on December 30th on Sanibel Island, Florida after a wonderful day of ‘shelling’ (a favorite pastime of mine). We had been shelling before, and during our first shelling outing the year before he had saved some of his shells. While walking on the coast line, Chris ran into the water exclaiming he had found the shell he'd been looking for, and when he ran back to show me, he opened his hand, and sitting in his palm was the most beautiful golden conch shell with the most beautiful ring perched inside. It was the most special moment of my life! Chris had painted and protected that shell with all his love and presented it to me in such a special place.” - Sarah

For more ideas and inspiration, learn how to handle a proposal timeline and get ideas where to hide an engagement ring before a proposal.

How to Make Your Reception the Best Party of Your Life