Here at Inside Weddings, there is nothing we like more than a love story. Though a wedding is the ultimate celebration of romance, a couple’s love really culminates in a proposal. There are a million different ways to pop the question, whether it’s public or private, simple or elaborate. Read these stories from brides featured in our real weddings section, and click each name to discover how their wedding days ultimately turned out. 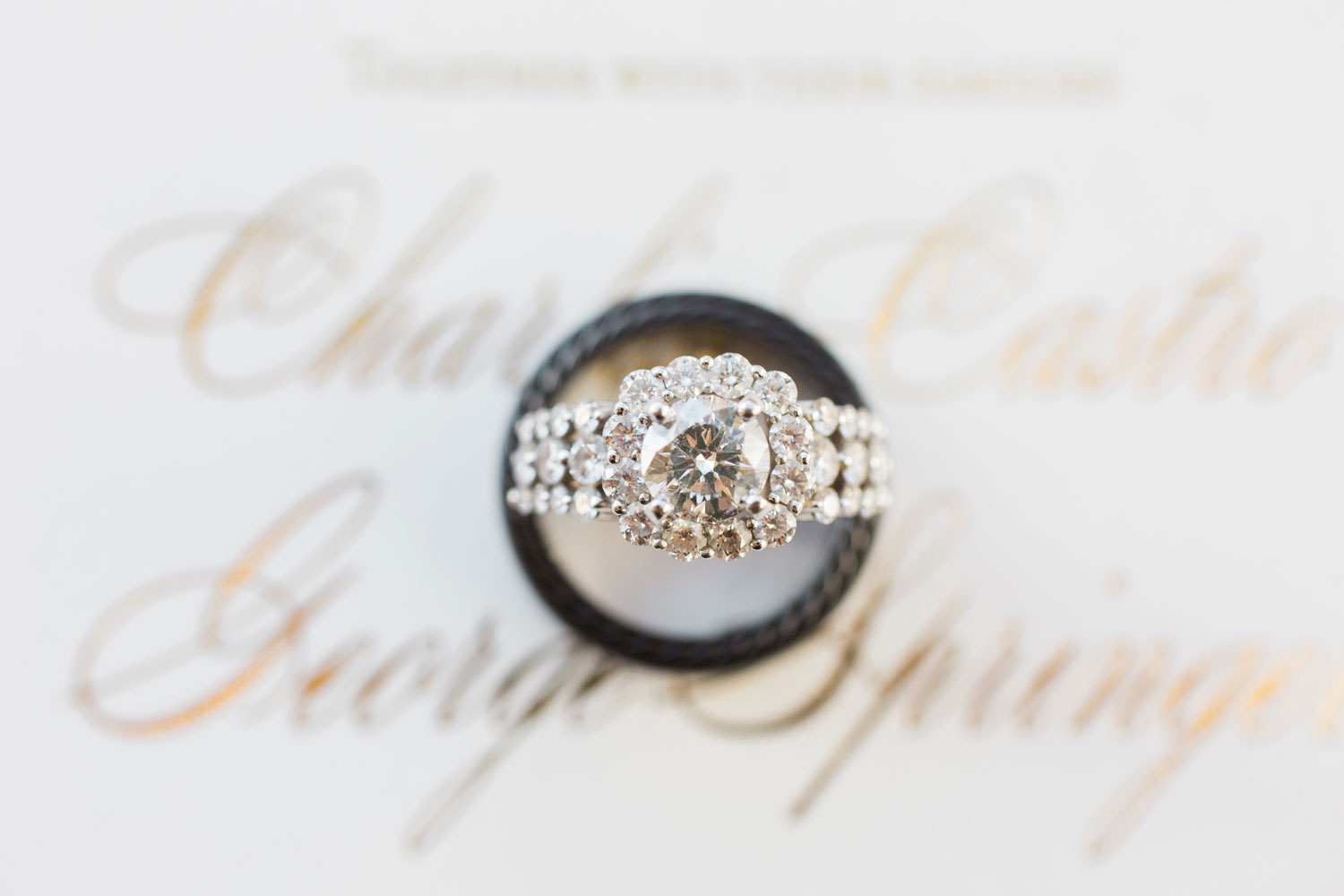 “He proposed on Christmas Day at my childhood home. My parents told me that we were attending a family dinner that evening. Everyone was in the car ready to leave when my sister told me she forgot to put my puppy in her crate. I hopped out of the car and ran back to my room to find my dog with a big red bow and a note around her neck reading “meet me at the Christmas tree.” I made my way downstairs to find him standing there and lost it. He proposed to me in front of the tree with just our families. It was perfect!” - Carly

“George and I planned a trip to Cabo with a few of our closest friends and family. Everyone there except for me knew that he was going to propose, so they helped set everything up. We rented a house overlooking a private beach, [and I wanted] to go watch the sunset. I walked down the stairs [and saw] friends and family staring at me. I glanced over and noticed in the sand there was a huge “will you marry me” sign. He got down on one knee, I attacked him by jumping into his arms, and the rest has been history.” - Charlise

“EJ told me to take the day off of work and that he wanted to take me on a little getaway to spend some time together. I had a funny feeling that he might propose… We showed up to the hotel, which is right on the water in Malibu, and he led me down these rose petal-lined stairs, which went straight down to the beach. There was a big heart drawn in the sand and that’s when he got down on one knee! I was so beyond excited, the entire moment and everything he said was a complete blur. I was over the moon!”  - Sophia

“Eric proposed to me at the Broad Museum in Downtown LA. He bought tickets and told me that we’re going on this date at 3PM. It was a little odd that he insisted on going on a weekday (it was a Wednesday). We both had to go to work, so we decided to work a half day and leave work by 12PM and then drive downtown together. When we got there, I was walking to the line, but he said we didn’t have to wait in line so we just skipped right through and got inside. I totally thought that was strange, but I thought maybe it’s because he bought tickets ahead of time. Once inside, we went straight upstairs to the tulip exhibit. Eric started acting weird once we got there; he was pacing around a little. When we were posing for a picture, Eric put his arms around my shoulder and I felt an odd object or a tap on my left shoulder (he was standing on my right side). I looked over and I saw a black box and I started to freak out! I looked over at him and he got down to one knee. He told me he loved me and that I meant the world to him and then he tried to say more but his eyes started watering up and couldn’t speak anymore words but a simple “will you marry me.” I of course said yes! Then the icing on top as I looked around the area – my parents, brother, and some of my best girlfriends, and my cousin from Vancouver were right there watching it happen! I was caught off guard but it was just so awesome! Turns out, he had been planning it for a few months to get everyone there to surprise me.” - Wendy

“It was raining profusely and Tom suggested we go have a glass of wine at an overlook on our property that is about two miles down into the woods. I was suspicious something was up since Tom wouldn’t be the first person to volunteer to take a jaunt through the woods in the pouring rain. We took a golf cart down through the mud and he proposed over a glass of wine and a cheese board.” - Kallen

“On our second day in Croatia, we were enjoying the sunshine while relaxing by the pool at our beautiful seaside villa. I began to feel self-conscious when three of my girlfriends each tried to convince me to sport a cover-up in lieu of my two-piece (later I learned that they were trying to protect me from having my picture taken in a bikini, which they knew I would hate). I was finally persuaded to throw on my peach cover-up to run to the grocery store. While I was waiting to leave, I realized I hadn't seen Dave nearly all morning, and he was acting strangely. Just when I'd about given up on spending time with him that day, I noticed that my favorite song was playing. Dave suddenly emerged from the other side of the villa – in a matching peach shirt – carrying a bottle of Champagne. Before I could figure out what was happening, Dave was down on one knee. He asked, and without hesitation I said "yes" to forever with my very best friend.” - Jackie

“Kyle had told me he was going to marry me pretty much since we first started dating. I remember sitting at a bar with him and planning parts of our wedding early on in the relationship. He had basically proposed to me over the summer and told me to start looking at venues, while he looked for a ring. I was looking at our dream location with my mom and best friend when Kyle surprised me. I went to check out the terrace, and there he was playing guitar and singing 'In Case You Didn’t Know' by Brett Young. I was in shock. He got down on one knee with his guitar strung around his shoulder, and solidified our engagement. It was so sweet and romantic. We ended up getting married the same place he proposed. I wouldn’t have had it any other way.” - Rebecca

“Alex proposed while we were on vacation in St. Barths. He popped the question while we were on a private yacht watching the sunset. He led me to the bow of the ship, where he gave me a hand-written love letter and the ring, which he had designed himself. Super dreamy!”- Suzanna

"Our family was in town and Zach planned everything perfectly. We spent the day celebrating an early Christmas with his side of the family and later planned on going out to dinner and having a night on the town with just the siblings. I had no clue what was going on and Zach’s twin sister and her husband picked us up from our then apartment in Hyde Park. We all parked and began walking past the large decorated tree in the center of Hyde Park Square. Zach’s sister suggested she take a picture of the two of us in front of the tree, and before I knew it Zach was on one knee proposing. I was in shock and said yes before he could even finish his sentence. We walked to Alfio’s restaurant in the square and both of our families were there waiting to celebrate with us.” - Jordan

“Jon had planned a vacation to Eleuthera in the Bahamas at a dreamy hotel call The Cove. He proposed on a cliff on the beach during sunset the first night we were there..then spent the next 5 days on the beach.” - Elizabeth

"We actually got engaged at Machu Picchu in Peru! I was interning at a non-profit in Lima for a few months, and Grant came down to visit me. We took a trip over to Cusco/Machu Picchu for a few days. After a morning wandering around Machu Picchu, I begrudgingly agreed to go on a hike through one of the paths – it was getting warm as the day went on and I was wearing a sweater. Grant convinced me I needed to go on this hike (and I was not happy about it), but the hike turned out to be a lot easier than expected. When we got to the end of the trail, there was a lookout point and surprisingly no one around. After a few quiet moments, he asked me to marry him.” - Hunter

"It was the day before Thanksgiving at my parents’ house in Potomac, Maryland. I was getting ready for dinner and thought we were the only people there when Mike asked if he could talk to me before everyone got home. When I walked into the bedroom from the bathroom, with half a wet head and still in sweats, he was sitting on the end of my bed with a ring, smiling. I went to call my parents and sisters to tell everyone to come home but Mike stopped me and lead me to the top of our staircase where I saw my parents, sisters, brother-in-law, and grandparents eagerly waiting downstairs with Champagne and Mike’s family on FaceTime.” - Michelle

"The proposal took place on Fire Island four years after we met. Brett organized a weekend over the summer with my closest friends so they 'could experience Fire Island for themselves.'  He surprised me and proposed on the beach at sunset and then continued the surprise with both of our families (who flew in from Dallas) to share the celebration.” - Farrell

"For Christmas break, Nick and I decided we would travel to Paris for a week and then spend the last half in the Maldives. In the Maldives, it was the second to last day of our time there and we were getting ready for dinner. As we were walking to dinner on the island we stopped by the ocean shore and there was a boat waiting for us. Nick had rented a private sailboat, and we sailed off to watch the most beautiful sunset I had ever seen to this day. I remember at that moment thinking to myself that I would probably never see something this beautiful again! After the sunset, the guy who was sailing our boat came around in front of us and gave Nick a box. Then Nick got down on one knee and opened the box with a beautiful engagement ring that was on a piece of coral on sand. My heart was beating so fast at that moment and I was so overcome with emotions of excitement and happiness that I don’t even remember exactly what he said. Of course I said YES! When we sailed back to the shore – and to my complete surprise – there was a beautiful romantic dinner set up that was totally secluded and private. Nick and I got to share the most special moment together on the beach having dinner to ourselves with a thousand stars in the sky that night.” - Bethany