One Disney-loving man found a way to make Splash Mountain even more exhilarating – he proposed to his girlfriend right before the big drop!

Patrick posted the official Splash Mountain photo that captured his proposal and his now-wife Annie's shocked (and soaking wet!) reaction on Imgur on Sunday (though the proposal actually took place in 2013). Check out the too-perfect-for-words photo below: 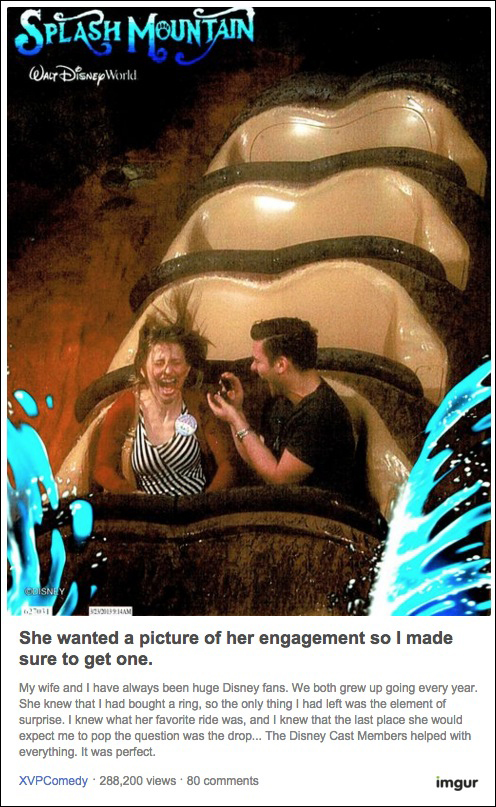 In a blog post Annie wrote in 2014, she explained that she and Patrick had planned to make Splash Mountain their first stop when they arrived at Walt Disney World, since it is her favorite ride and it had been closed the last two times they visited the park. To her delight, they were given their own boat, and as they were ascending for the hair-raising final drop, Patrick pulled out the ring and popped the question.

"He had timed it perfectly – the photo snapped and got my reaction of laughing, crying, while also getting soaked," Annie wrote. "I said 'Yes, of course!' when we reached the bottom and put on my beautiful ring."

As it turned out, Patrick had secretly contacted the Splash Mountain manager ahead of time and explained his plan, even sending her photos of himself and Annie, so the cast members would know when they had arrived and could give them their own boat. But the cast members went a step beyond – the ride had been scheduled to be closed for maintenance that day anyway, so after they saw Annie and Patrick enter the line, they shut down the ride so they could have the entire attraction to themselves.

When the couple exited Splash Mountain, Annie was shocked to find their parents waiting for them, as well as cast members who gifted them a copy of their photo. For a couple of Disney fans, it doesn't get any more magical than that!

For an impressive and memorable proposal, all you need is a plan that is perfectly tailored to your love's interests. One man created a personalized Monopoly game that featured a hidden compartment for the ring, and a couple of Broadway dancers got engaged while filming a dance video!

Get Lost in Love at This Secluded Honeymoon Destination