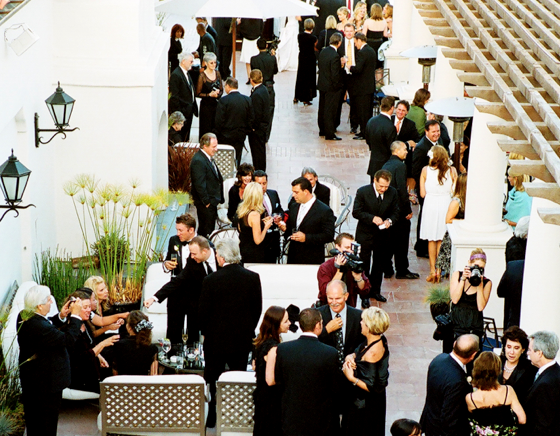 As society changes, traditions and etiquette tends to evolve as well. With more couples moving in together before getting engaged or married, “no ring, no bring” policies for plus ones can seem outdated. The idea that the bride’s family has to pay for the wedding or that guests need to sit on a specific side of the aisle for the ceremony are also customs that many people have outgrown. However, some standards of etiquette stand the test of time, such as sending in your RSVP cards in on time. Wearing white when you’re not the bride, however, seems to be a grey area for some.

Many outlets dispensing advice about attending weddings now say that it is now acceptable to wear a shade of white to someone else’s nuptials, but we tend to disagree. Obviously there are exceptions, such as bridesmaids asked to wear dresses in the hue, or if the couple has decided to make their reception a “white party” – where everyone is asked to don the color. Otherwise, the reasons for doing so are few and far between.

It’s true that many brides will likely say it is okay if you directly ask if your outfit is acceptable, but you can’t always guarantee that she’s not just trying to avoid being labeled a “bridezilla.” Yet, it’s not for the bride’s sake that we recommend not breaking this once-standard rule – it’s for the guest. Whether or not the couple of honor cares about your attire, there will almost certainly be someone in attendance who thinks it is gauche. No one wants to receive glares from the mother of the bride or risk someone spilling red wine “accidentally on purpose” on a white dress because they think they’re doing the bride a favor.

Another aspect of this is that not wearing white is a remarkably easy rule to follow. Sure, with certain styles it’s unlikely that anyone will actually mistake you for being the bride. However, there are so many other colors to wear that it simply isn’t worth the risk of people thinking you are purposefully trying to upstage someone on one of the biggest days of their life. Save the cute white dress for a different occasion and let the bride have her moment.

Learn what else you shouldn't wear to a wedding. find out if you're allowed to wear black to a wedding, and common etiquette mistakes guests make.

How to Determine Your Wedding Invitation Style

Can You Have a "B List" for Your Invitations?