Engagement season is starting early! The trend of engaged TV stars continues as Janel Parrish of Pretty Little Liars recently accepted a proposal from her boyfriend of almost 14 months. It was at a park in Toronto – where the actress is playing Sandy in a new production of Grease: the Musical – that Chris Long got on bended knee to ask his beloved to marry him. The first photo Janel posted to announce her engagement showed the lovebirds kissing in their autumnal outfits, perfect for Canadian weather. A lovely fountain made for the perfect backdrop. 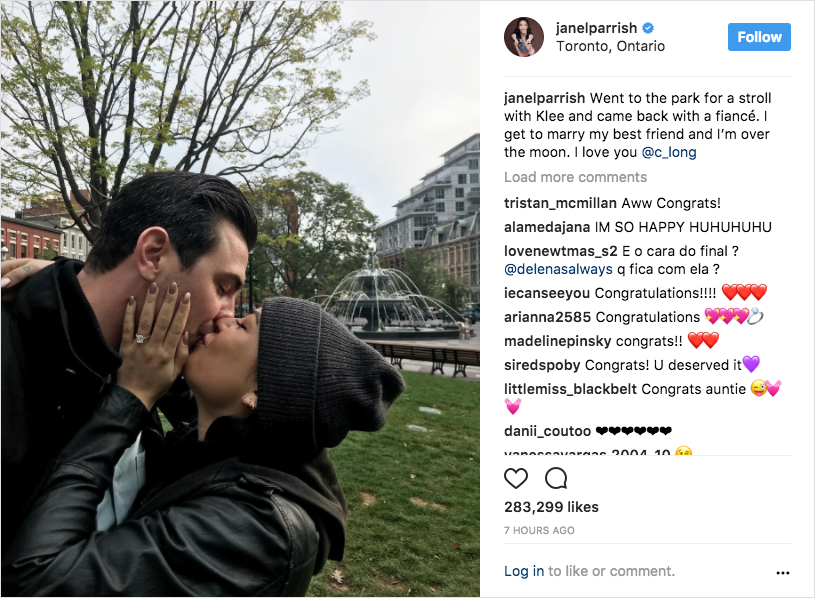 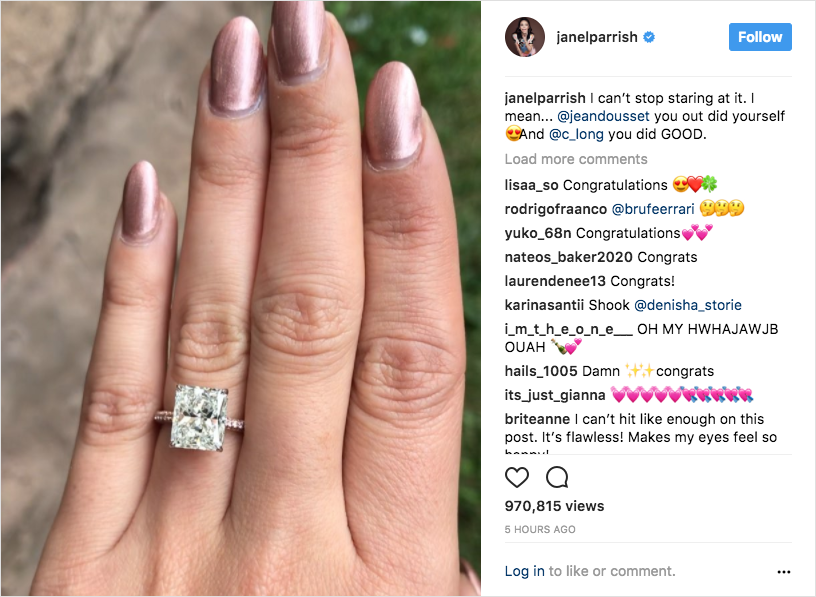 Two hours later, Janel shared what everyone really wanted to see – a close up of the ring! And what an engagement ring it is. A large – we estimate a minimum of three carats – radiant-cut diamond sparkles brilliantly on the rose gold, pavé setting. No word as to whether the star was expecting the proposal, but her manicure looks so perfect that it must have been fate. The metallic rose gold polish on her almond nails impeccably matches the band of her new bauble. We hope that she chooses the same shade for her wedding day!

Of course, it’s far to early to guess what kind of celebration the happy couple will have, although we wouldn’t be surprised if the Hawaiian-born bride chose to embrace her home state for a beautiful island wedding. The bohemian styles of Claire Pettibone could be a great option for the actress, who already has some familiarity with the designer. On the series finale of Pretty Little Liars, Lucy Hale’s character Aria wore the “Ariel” gown by Claire Pettibone. Surfer Carissa Moore also tried on some of the designer’s dresses for her own upcoming Hawaiian nuptials.

Rediscover the real weddings of Mario Lopez and Mark-Paul Gosselaar!

The PLL star donned an ornate and unique bridal dress by Claire Pettibone!

A Sneak Peek into the Wedding Style of Anna Camp

When to Wear Your Veil on Your Wedding Day