The 73rd Golden Globe Awards, which were broadcast on January 10, 2016 from the Beverly Hilton in Beverly Hills, California, honored the best in film and American television of 2015. While The Hollywood Foreign Press Association nominated and awarded many great films, television series, and actors and actresses, the style on the red carpet was just as noteworthy as the award show itself.

We saw many women wearing bridal-worthy gowns in bright whites, as well as styles with sleek silhouettes, bold cutouts, high and plunging necklines, unique appliqués, illusion details, and two-piece ensembles. The design characteristics of these red-carpet favorites were also featured prominently at this season's bridal fashion week. Taking inspiration from the women in white, as well as the other stunning gowns with hints of bridal style, we've gathered wedding dresses from this season's runway shows, so you can "get the look" of your favorite gowns from the 2016 Golden Globes in a unique bridal twist.

Whether the celebrities below made the best- or worst-dressed lists, their gowns can inspire your wedding dress since you can take inspiration from your favorite part of each gown. Learn more about the stylish celebrities' gowns below, and discover how you can find a similar look for your bridal ensemble: 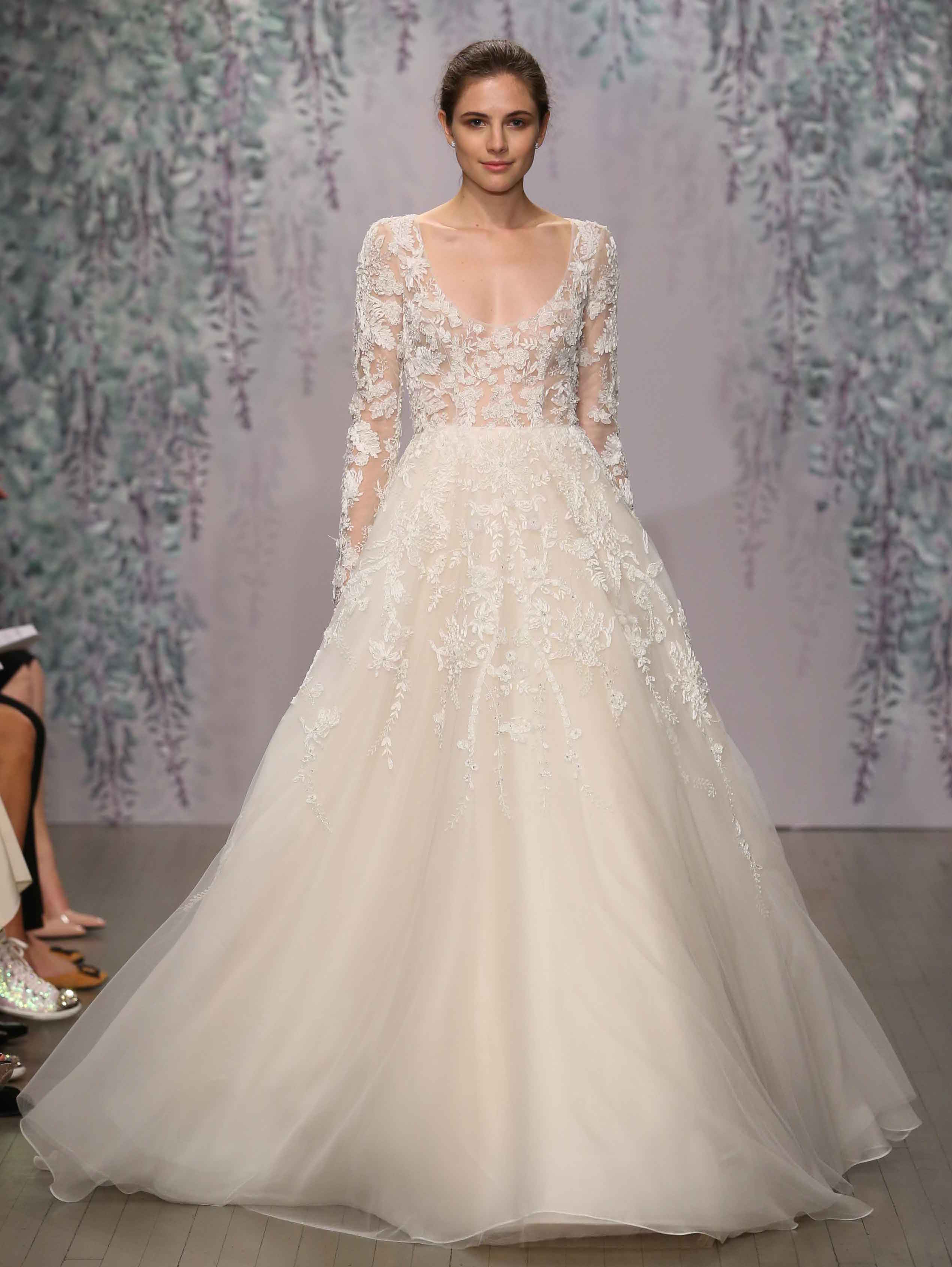 Corinne Foxx, 21-year-old daughter of Jamie Foxx and this year's Miss Golden Globe, wore a romantic gown with sheer long sleeves and a plunging illusion deep-v neckline with embroidered details on the bodice, sleeves, and skirt by Australian designer Paolo Sebastian. Achieve a similarly ethereal look with the above gown from Monique Lhuillier's fall 2016 collection. Photo by Don Ashby 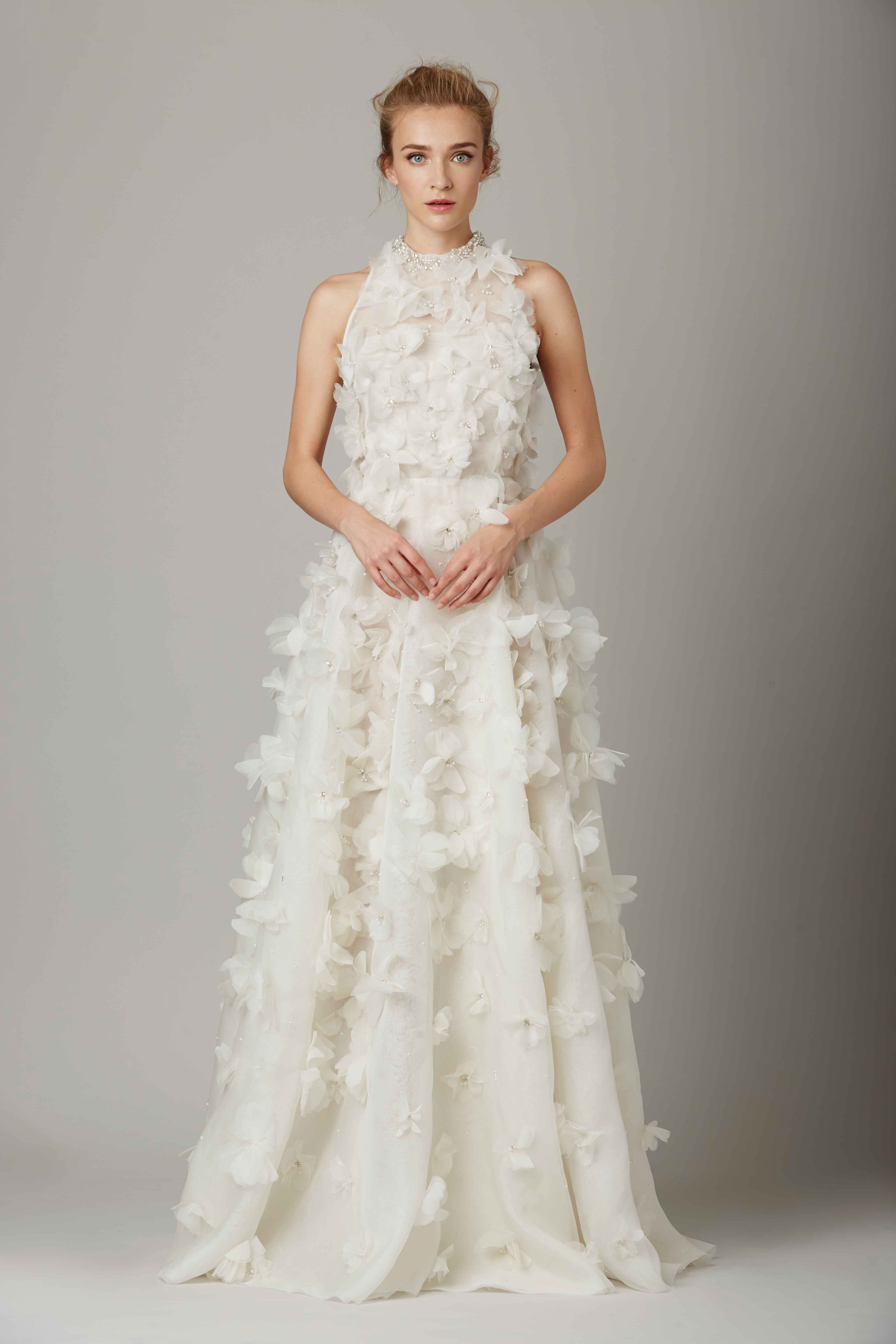 To give Amanda Peet's high-necked Alexander McQueen look with lace details a bridal spin, look to "The Glass House" gown by Lela Rose, which features a high neckline and hand-cut floral appliqués dotted with pearls and crystals. Photo courtesy of Lela Rose 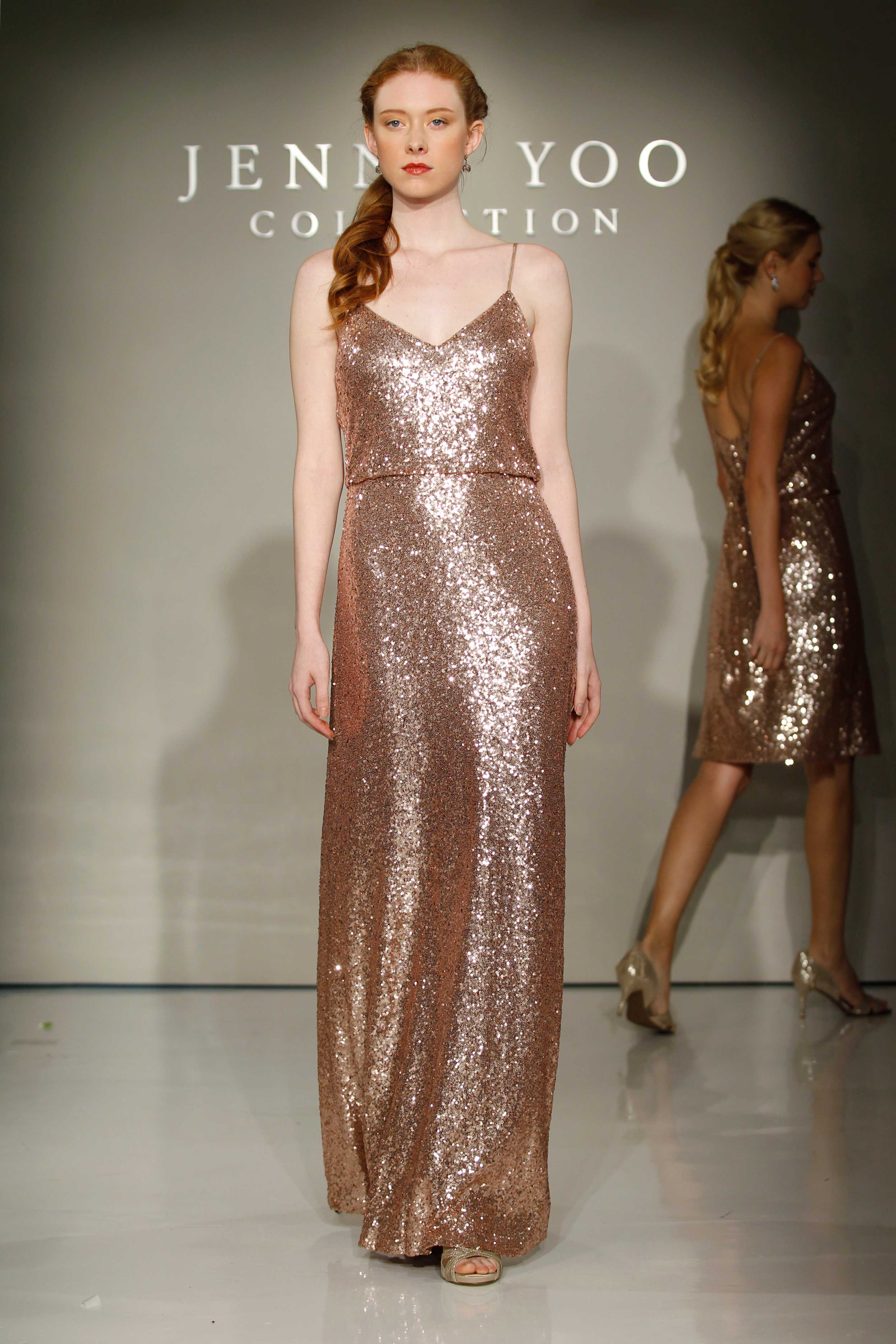 Model and Mad Max: Fury Road actress Rosie Huntington-Whiteley, who recently became engaged to actor Jason Statham, was dressed in a gold Atelier Versace gown with spaghetti straps, sparkling details, and a figure-hugging skirt. If you love this look for a pre-wedding event or glitzy bridesmaid dress, discover the "Jules" gown from the Jenny Yoo Bridesmaid collection, which features glimmering details as well as a similar neckline and silhouette. Photo by JJ Ignotz Photography 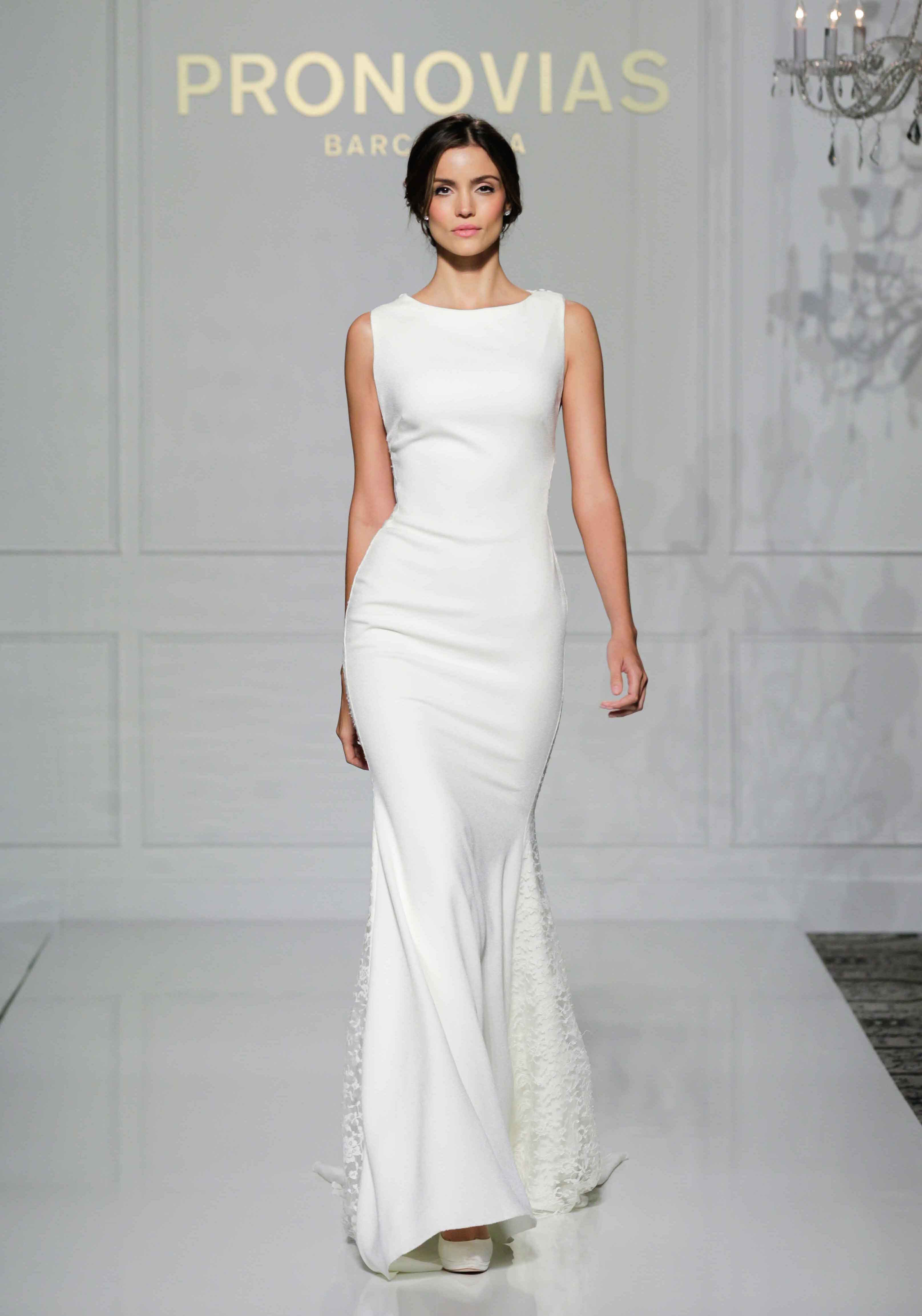 Orange Is the New Black star Laverne Cox wore a white high-neck sleeveless gown by Elizabeth Kennedy featuring a stunning train reminiscent of classic bridal style. Get a similar look with the "Valira" gown, which also offers French lace detailing on the sides of the skirt, from the fall 2016 collection by Pronovias. Photo by Dan Lecca 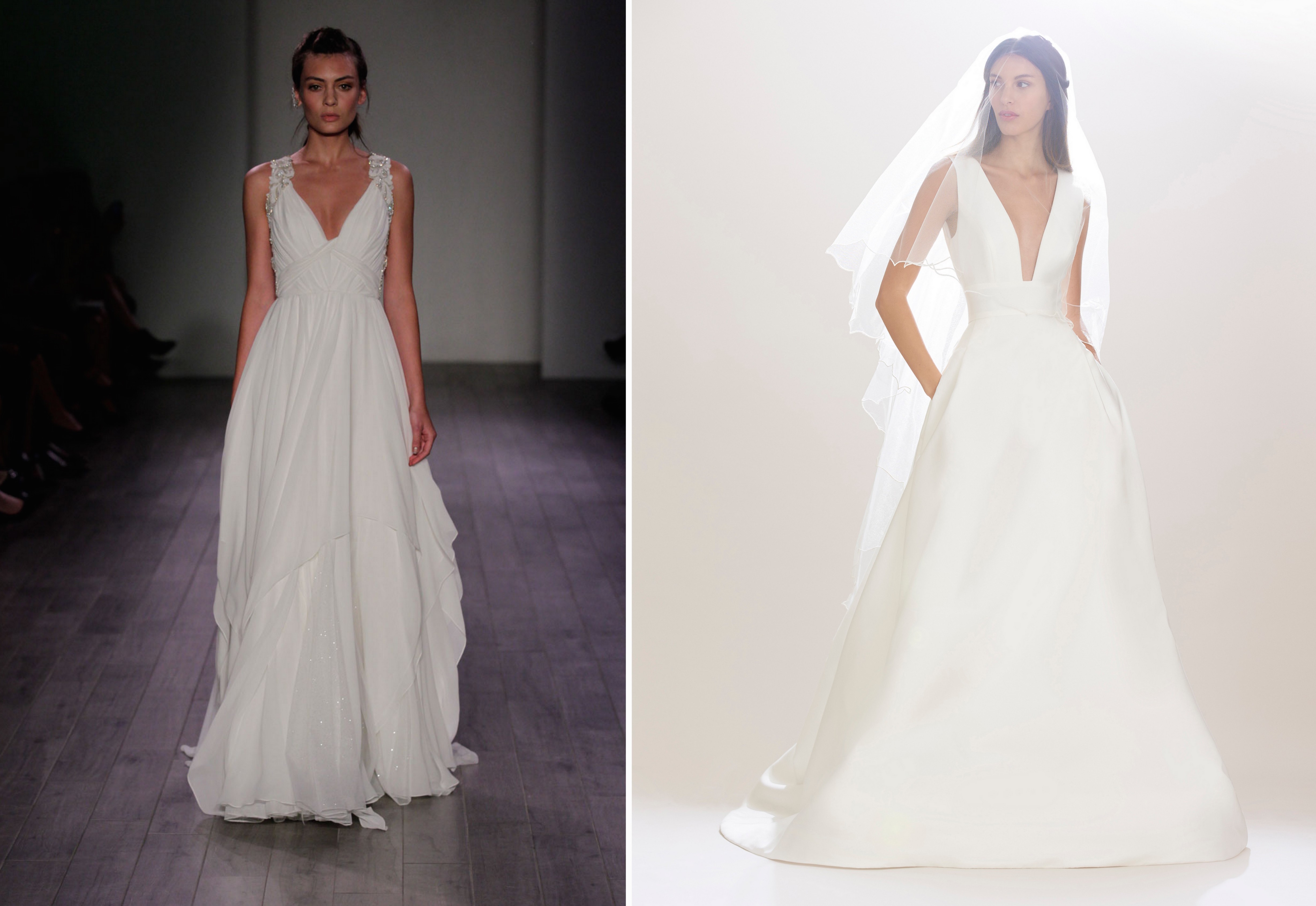 Brooklyn actress Saoirse Ronan, who was nominated for Best Performance by an Actress in a Motion Picture - Drama, wore a bridal white gown with a deep-v neckline, a thick waistband, and a sheath skirt by Yves Saint Laurent Couture. Achieve a similar style in either Hayley Paige's draped gown with jeweled detailing at the straps (at left) or Carolina Herrera's A-line gown with a deep-v neckline and waistband (at right). Photos (L-R) courtesy of Hayley Paige and Carolina Herrera 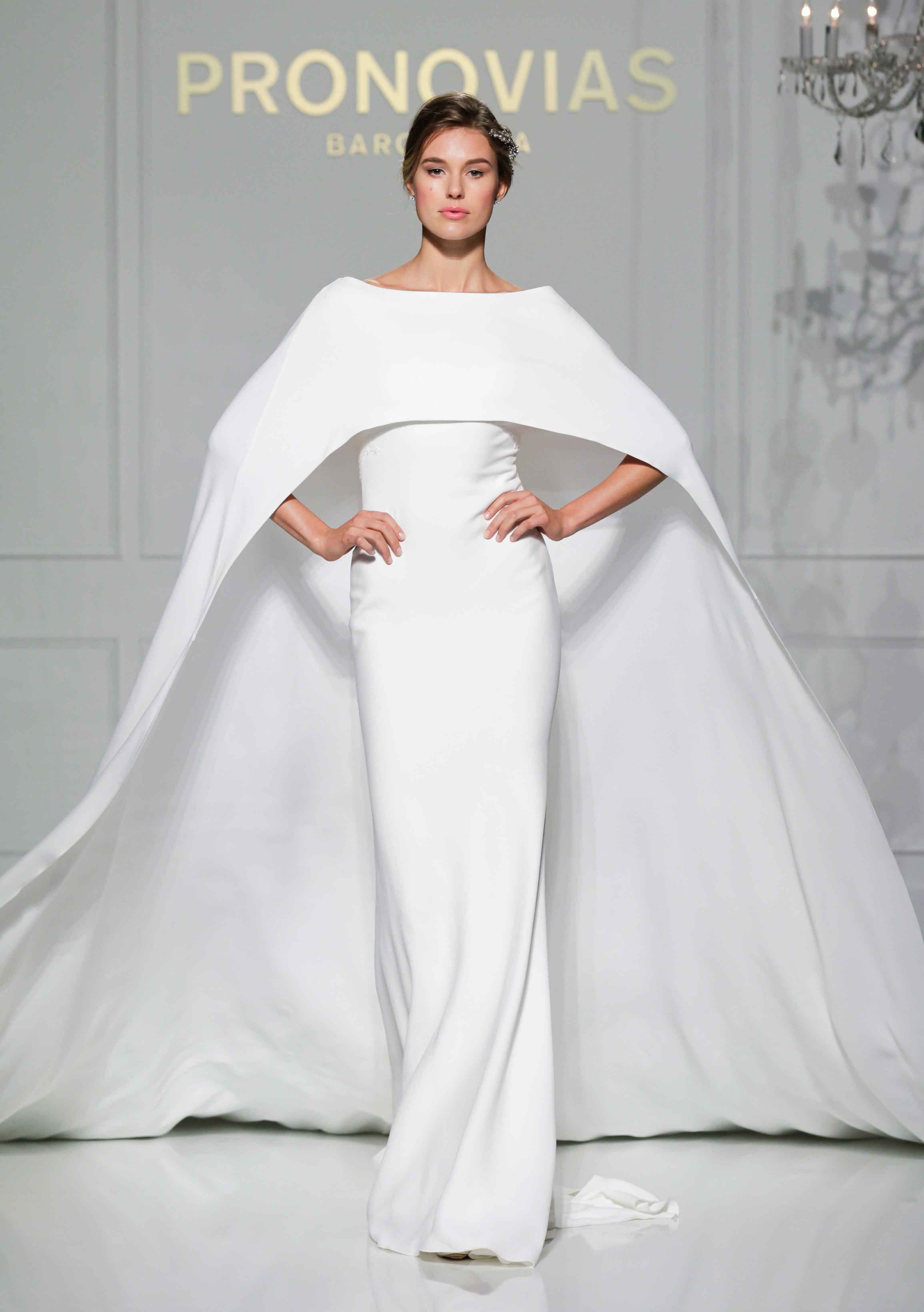 Taraji P. Henson, who won Best Performance by an Actress in a Television Series - Drama for her role as Cookie in Empire, wore a strapless gown in wedding white with a cape train by Stella McCartney. Get a similarly dramatic bridal look with the "Verona" gown from the fall 2016 collection by Pronovias. Photo by Dan Lecca 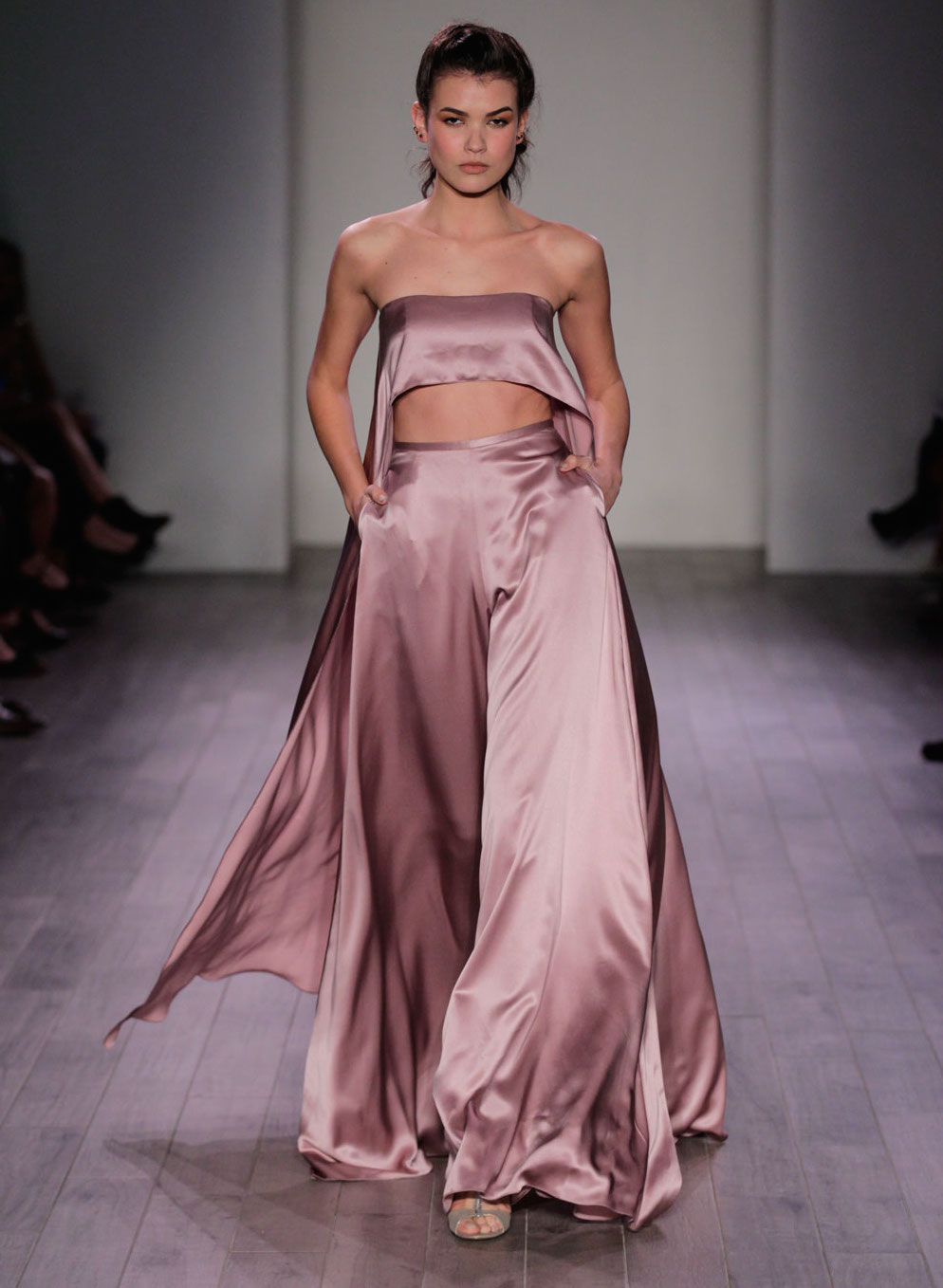 Kate Hudson's ab-bearing ensemble by Michael Kors Collection definitely turned heads on the red carpet. For a similar style that shows off your obliques, consider the "Lou" silk bandeau top with high-waisted pants by Hayley Paige. Though this particular design features pants instead of a skirt like Kate's ensemble, it will achieve the same head-turning look. Photo courtesy of Hayley Paige 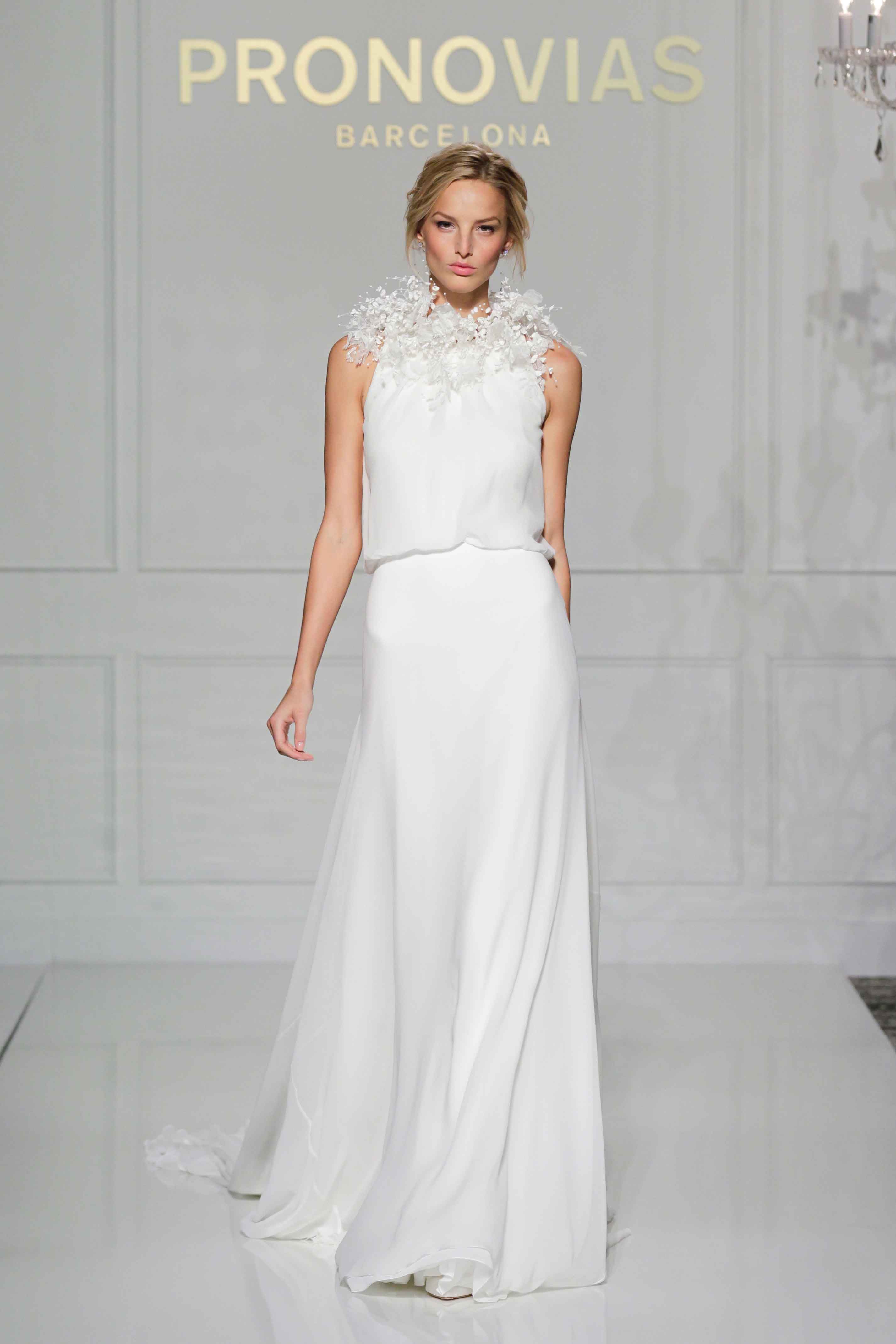 While we wait to see what actress Amber Heard will wear to her wedding to Johnny Depp, we can assume it will be glamorous and unique. If she were to translate this look – a high-neck pink Gucci dress with a floral collar – into her wedding-day ensemble, she'd likely choose the fall 2016 Pronovias "Veneto" flared wedding dress in silk gauze with a blouson bodice featuring a halter neckline embellished with white flowers. Photo by Dan Lecca 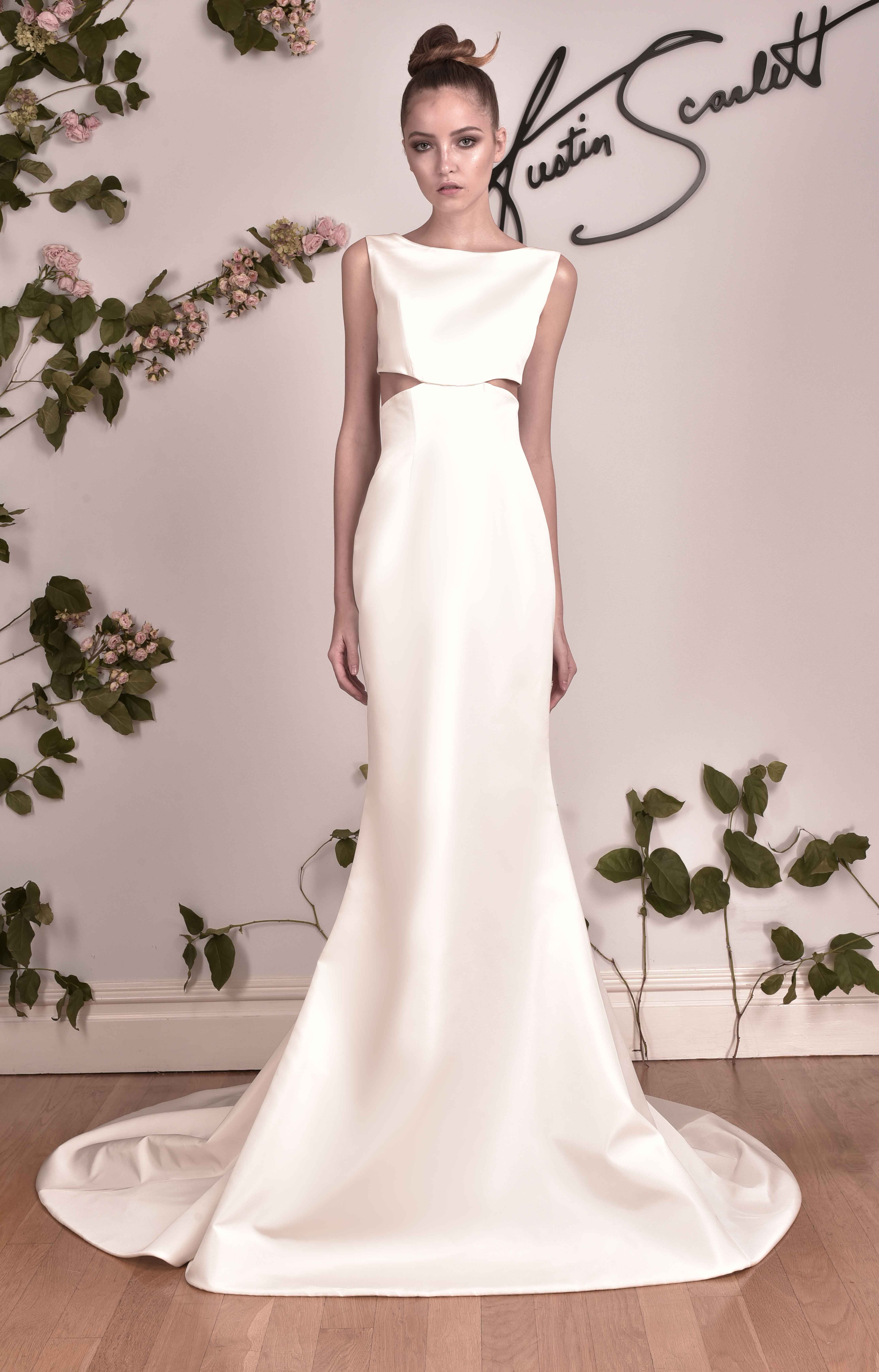 Winner of Best Performance by an Actress in a Motion Picture - Musical or Comedy for her role in Joy, Jennifer Lawrence accepted her award in a bright red column gown with cutouts by Dior. For a similarly bridal look, find similarities in the "Promenade" gown from Austin Scarlett's fall 2016 collection. The two-piece ensemble in silk faille features a narrow trumpet skirt and a bolero top with an open bow back. Photo courtesy of Austin Scarlett

For more celebrity wedding style, click here, and find additional fashion slideshows here. See what some of your favorite celebrities wore on their wedding days on our real weddings page!

Why Communication is Key in Marriage