Whitney Cummings, the stand-up comedian, actress, writer, and creator of the sitcoms Whitney and Two Broke Girls, is engaged! Her boyfriend of about a year and a half, Miles Skinner, proposed on her birthday while they spent time with her beloved horse, King.

A friend of the couple hid nearby and got both photos and video of the moment. Not only did Whitney share a couple videos of the proposal, but she also shared videos on her Instagram. The first video is in the immediate aftermath of the proposal, while she is still in disbelief of the exciting moment. “I would have gotten a manicure!” she jokes before taking off her fashion rings to better show off her new sparkler for the engagement photo. 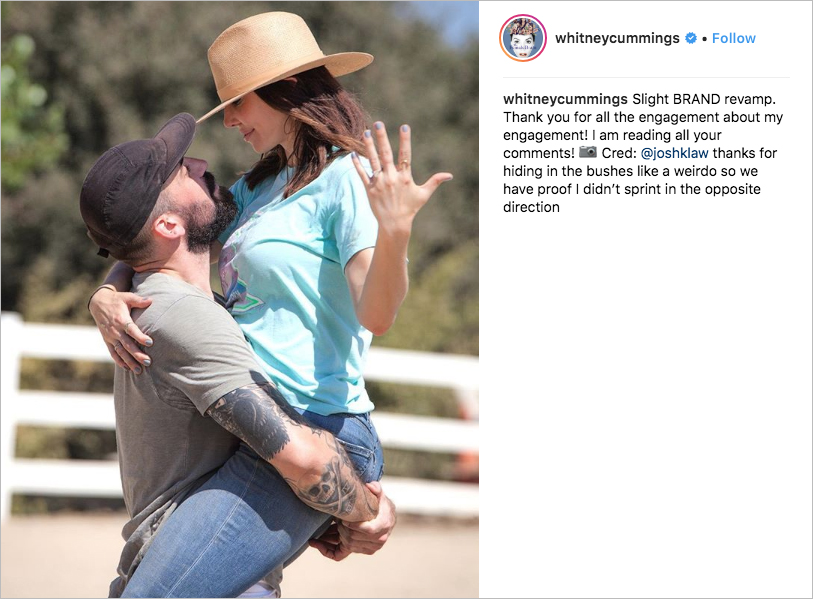 The second video is of Whitney holding the ring itself – according to the caption, a friend asked for a video so she could see it up close – before the comedian accidentally drops it on the ground! Luckily there doesn’t seem to be any damage to the stunning solitaire emerald-cut diamond.

For more celebrity news, get a behind the scenes look at the wedding from the hit film Crazy Rich Asians and see photos from Lea Michele's engagement party.

Rediscover the real weddings of Mario Lopez and Mark-Paul Gosselaar!

From an intimate dinner to an exciting weekend getaway, gather ideas!