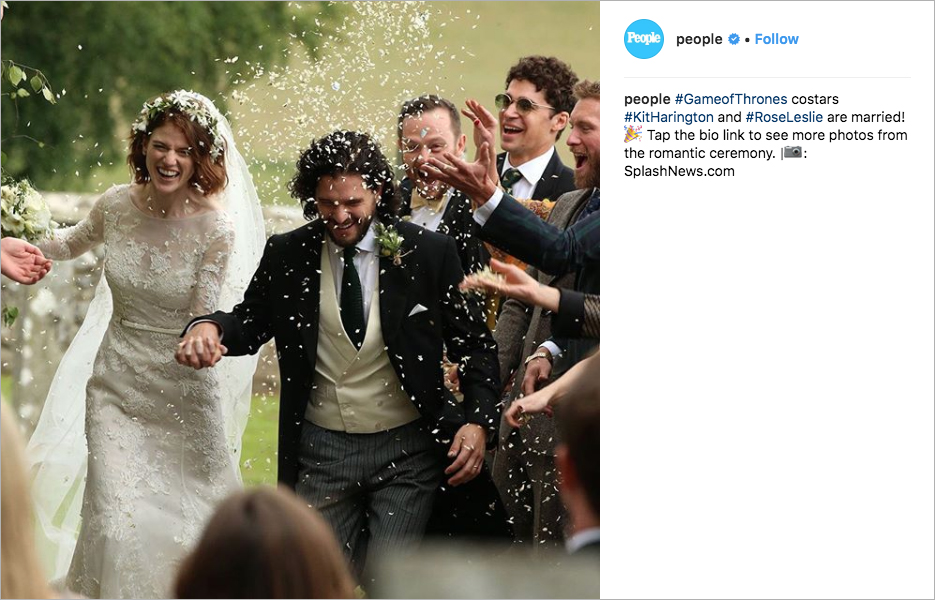 Jon Snow gets a happy ending! No, we’re not spoiling the final season of Game of Thrones – Kit Harington and Rose Leslie, who played Ygritte on the HBO series, got married over the weekend. The pair had a lovely traditional celebration in the bride’s hometown of Aberdeen, Scotland, and thankfully it went much better than weddings on the show tend to go. Rose was stunning in a long-sleeve gown with lace appliqués and a long veil with a blusher. The redhead additionally adorned her chin-length wavy bob with a beautiful floral headband, and she was all smiles when greeting fans and well wishers as she got out of the car with her father.

The groom wore formal attire, but still had a twist to showcase personality. Instead of donning a matching suit, he wore a black jacket, cream blouse, and striped trousers. His boutonniere perfectly complemented his bride’s small bouquet. The newlyweds each ended up with pieces of blossoms in their hair following the ceremony, as their guests showered them in tiny petals in celebration as the happy couple left the church. Rose and Kit then went into their getaway vehicle, decorated with ribbons, a “just married” sign, and classic tin cans. They then were off to the Leslie family castle, where they celebrated with family, friends, and cast members.

The actors met on set in Iceland back in 2012, where they also fell in love. Their characters had a forbidden romance as well, and though Ygritte didn’t survive the famously bloodthirsty series, Rose has had plenty of work in the meantime, most notably as one of the stars of The Good Fight, the critically acclaimed spin-off of The Good Wife. After being teased by Nicole Kidman about proposing when appearing on The Late Late Show with James Corden, Kit finally popped the question in September of 2017.

Preview the Winter 2018 Issue of Inside Weddings

Your Guide to a Wedding Guest List You Won't Regret