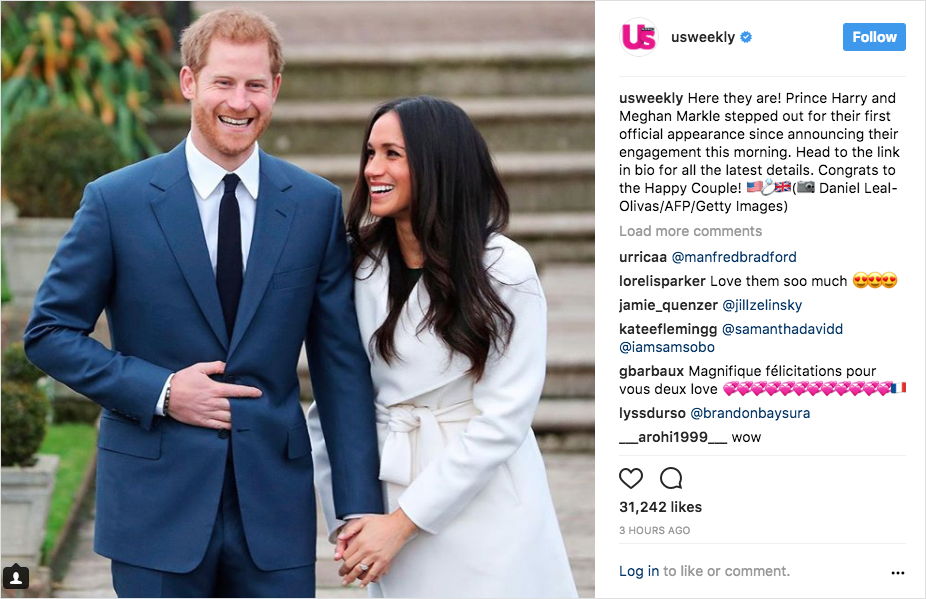 Today Clarence House, or the London residence of the royal family, has announced that Prince Harry and actress Meghan Markle are engaged. Many suspected this news was coming, as it was recently revealed that the upcoming seventh season of the television show Suits would be her last.

Fans of the legal drama are hoping that her character Rachel will finally marry Mark (played by Patrick J. Adams) before she leaves the show. Mark proposed to Rachel in episode 16 of season four – watch the video below!

Spoiler alert! Sadly the couple didn’t tie the knot, as she was left at the altar in the season five finale when Mike had to go to prison. However, at least fans got to see Meghan don a stunning bridal gown by Anne Barge – we can’t wait to see what she wears for the royal wedding!

Prince Harry and Meghan have been dating since last summer, but official confirmation came November 8, 2016. The pair naturally faced public scrutiny due to their status as public figures, but Meghan seemed to fare worse than average from the notorious British tabloids, due to her being an American, having been previously married, and even her race. Prince Harry stood by his then-girlfriend, now fiancée’s side by releasing a statement denouncing the racist and sexist treatment of his beloved on both the press and social media, as well as stating that he feared for her safety.

Since then, many people in both the United States and the United Kingdom, as well as the world at large, have been enamored with the couple. The announcement of their engagement has delighted millions and we are sure all eyes will be on their wedding – much as it was for the wedding of Prince Harry’s older brother Prince William, the Duke of Cambridge, to the Duchess of Cambridge, née Kate Middleton.

Prince Harry and Meghan Markle will marry at St. George's Chapel at Windsor Castle in May 2018. The site holds special significance to the groom-to-be, as it was the place of his baptism in 1984. The house of worship was also the location chosen for the marriage of Prince Edward, Earl of Wessex and Sophie, Countess of Wessex in 1999, as well as Charles, Prince of Wales and Camilla, Duchess of Cornwall's 2005 prayer and dedication service.

See how our predictions for Pippa Middleton's wedding compared to the real thing, and see engagement rings worn by real brides that are similar to her Art Deco sparkler.

Your Guide to a Restaurant Wedding