If you tuned in to Sunday night’s coverage of the 2017 Emmy Awards, you likely took note of the fashion choices of many of your favorite television stars. There were a wide variety of gowns, from more modest high-neck, long-sleeve ensembles to figure-hugging dresses with plunging necklines. Some styles were classically beautiful while others were daring and bold.

Many attendees chose to wear wedding white, which inspired us to find similarities in the red-carpet gowns and the latest styles shown on the bridal runway. Some of the trendy looks may even influence what we see at Bridal Fashion Week next month as fashion for women spans every life stage and event – from award shows, to galas, to weddings. Take a look at some of the top trends we saw at the 2017 Emmy Awards and let us know if you're looking forward to sporting one of these looks on your wedding day.

As we mentioned, a number of stars wore white, including Sofia Vergara and Evan Rachel Wood – who donned a chic jumpsuit. The Modern Family actress looked beautifully bridal in a strapless Mark Zunino mermaid dress with asymmetrical detailing, much like the Monique Lhuillier gown shown below. The star of HBO's Westwood and nominee for Outstanding Lead Actress in a Drama Series was fashion-forward in a Moschino three-piece suit. Brides desiring a similar look will love jumpsuits – like the one shown below by Oscar de la Renta. 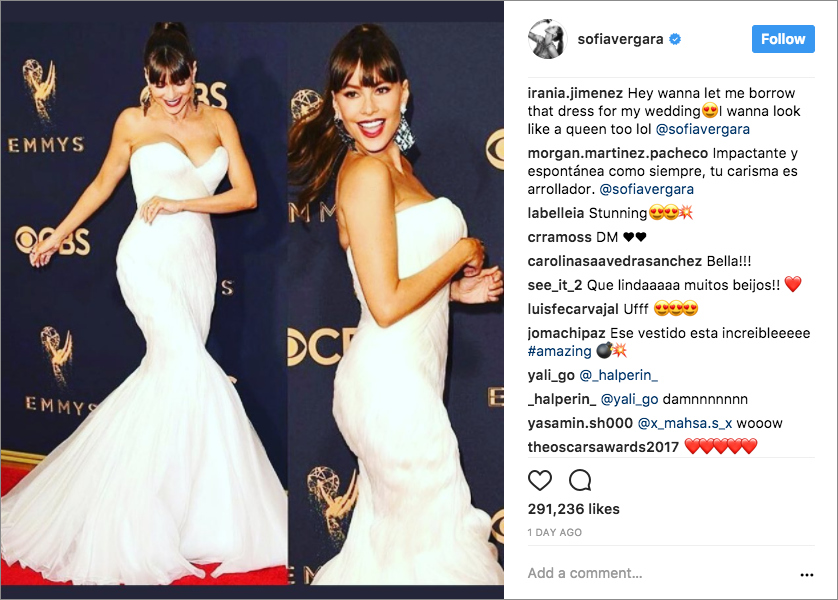 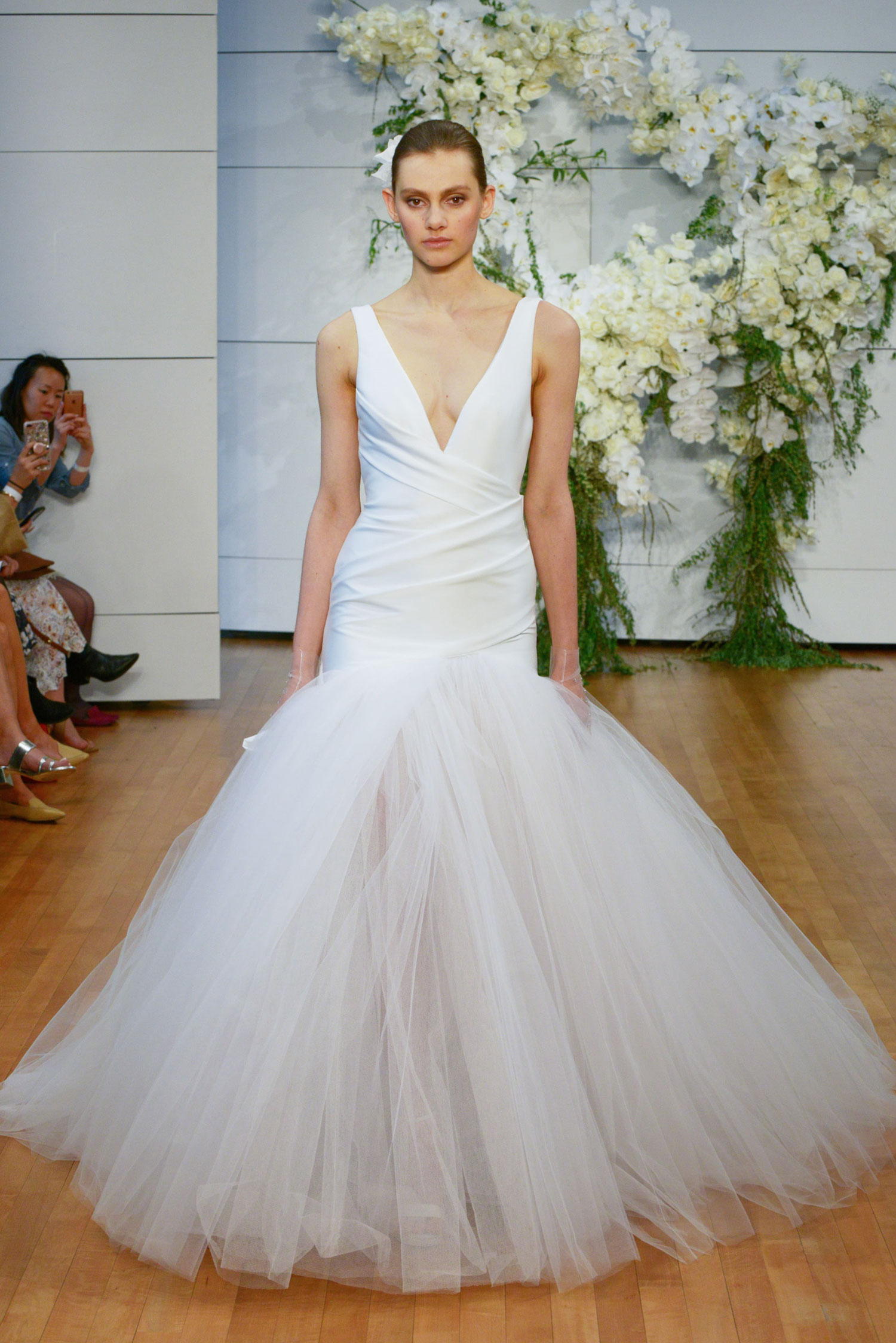 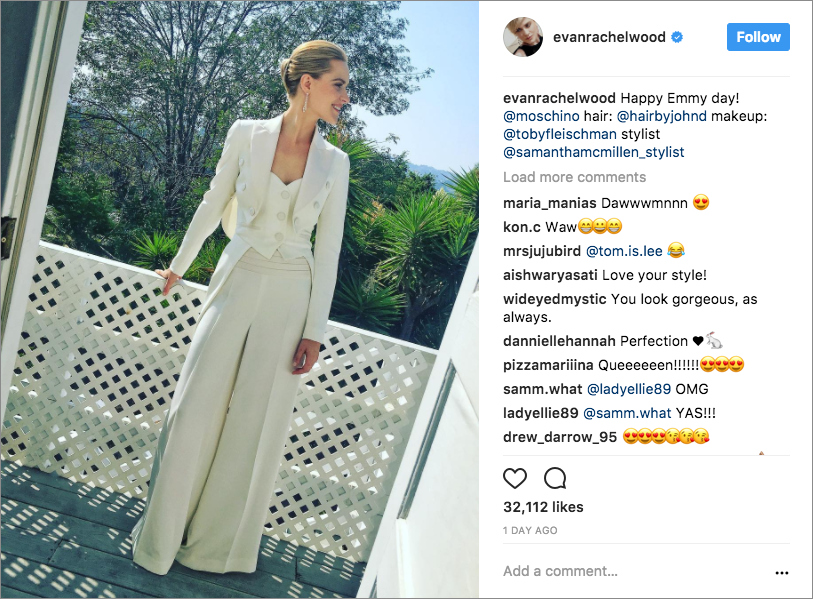 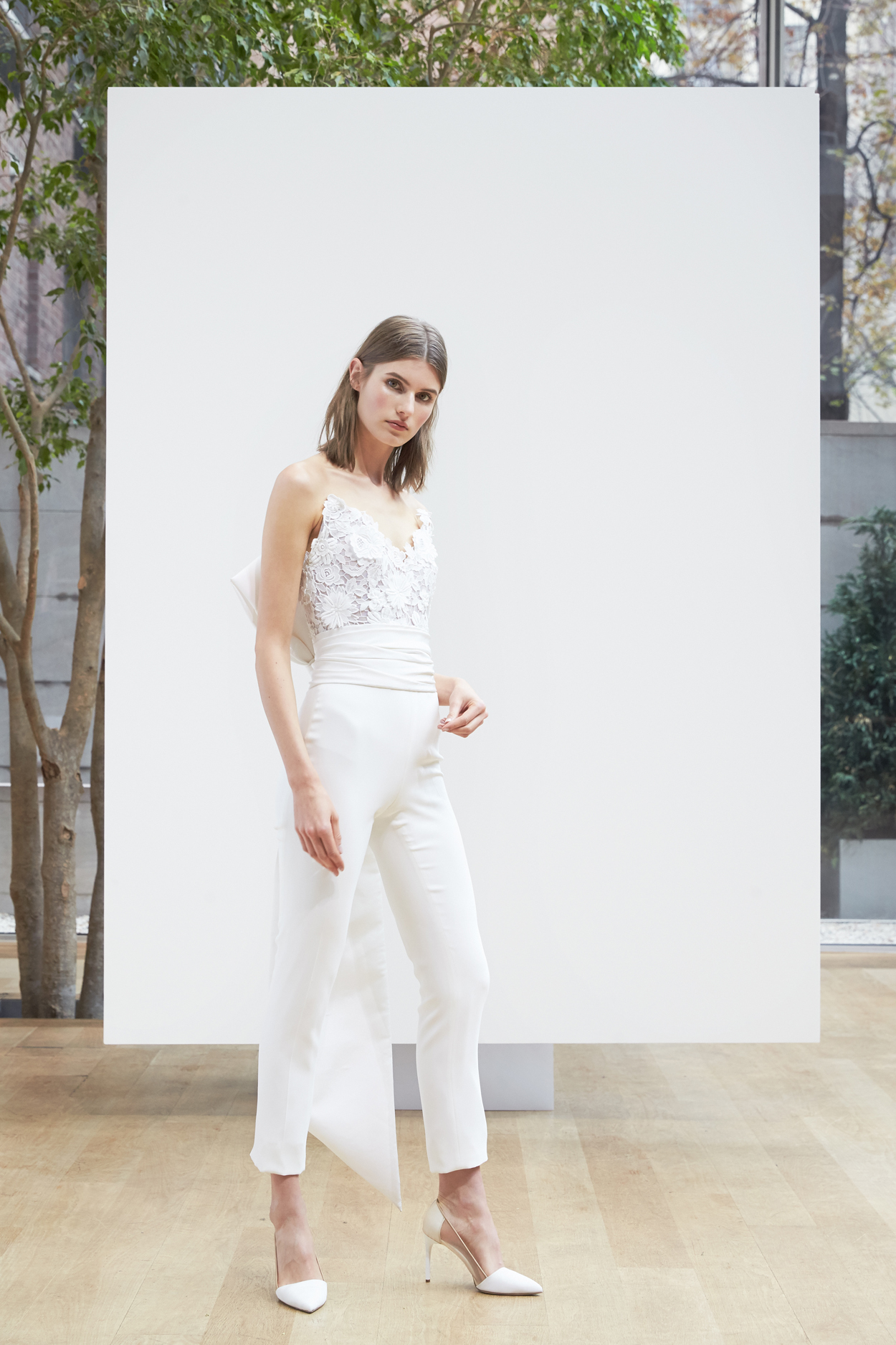 Another big trend we saw at the 2017 Emmy Awards was the use of feathers in gowns.  Tracee Ellis Ross, who was a nominee for Outstanding Lead Actress in a Comedy Series for her role in Black-ish, Zoe Kravitz of Big Little Lies, Quantico actress Priyanka Chopra, and Keri Russell all wore gowns with feather details. We've seen a similar trend in bridal gowns, like the dress by Victoria Kyriakides below. 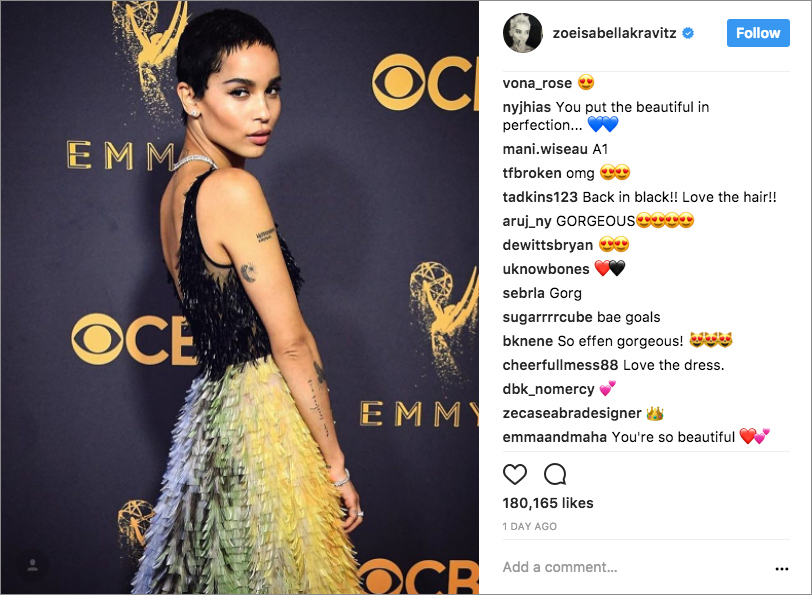 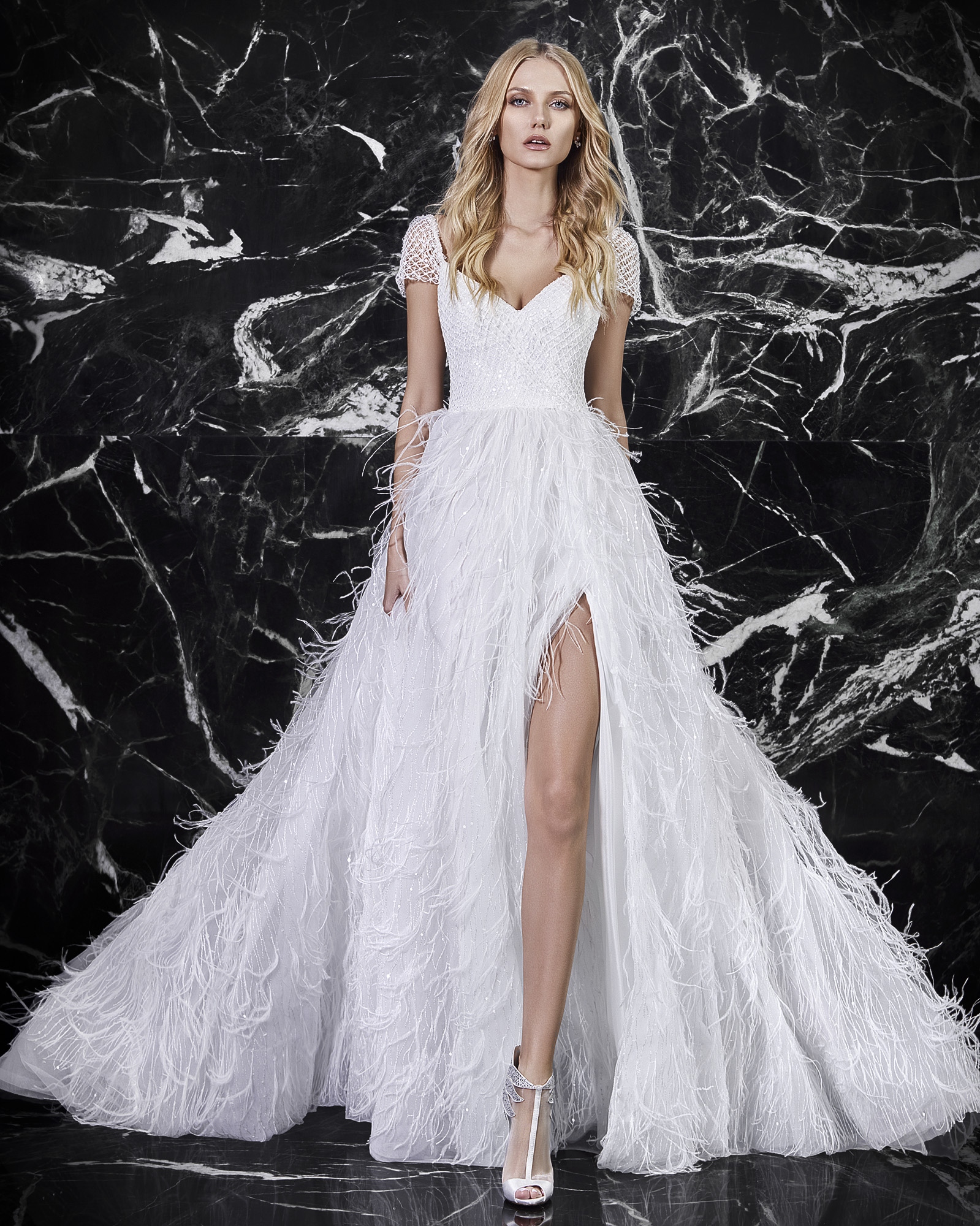 Illusion details continue to be popular on both the red carpet and weddings, with Allison Janney and Felicity Huffman wearing beautiful styles with floral and vine embroideries over sheer elements. A number of bridal designers also showcase this look frequently, such as the gowns below by GALA by Galia Lahav, Isabelle Armstrong, and Liancarlo. 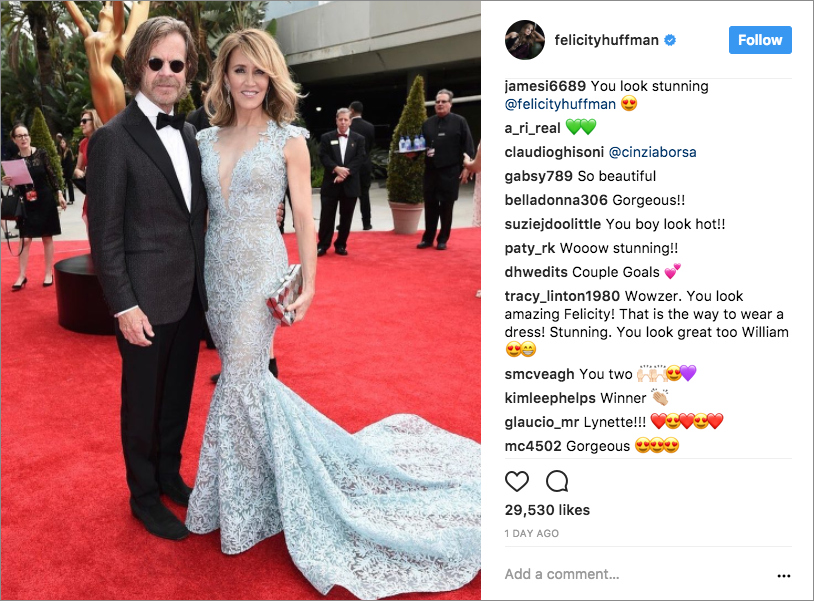 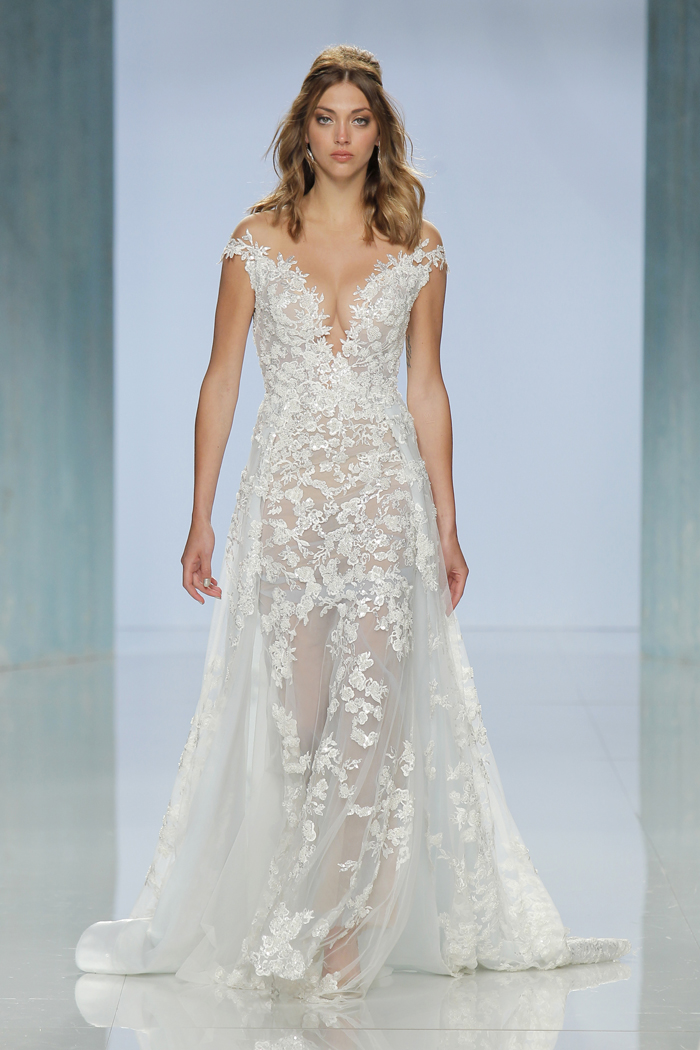 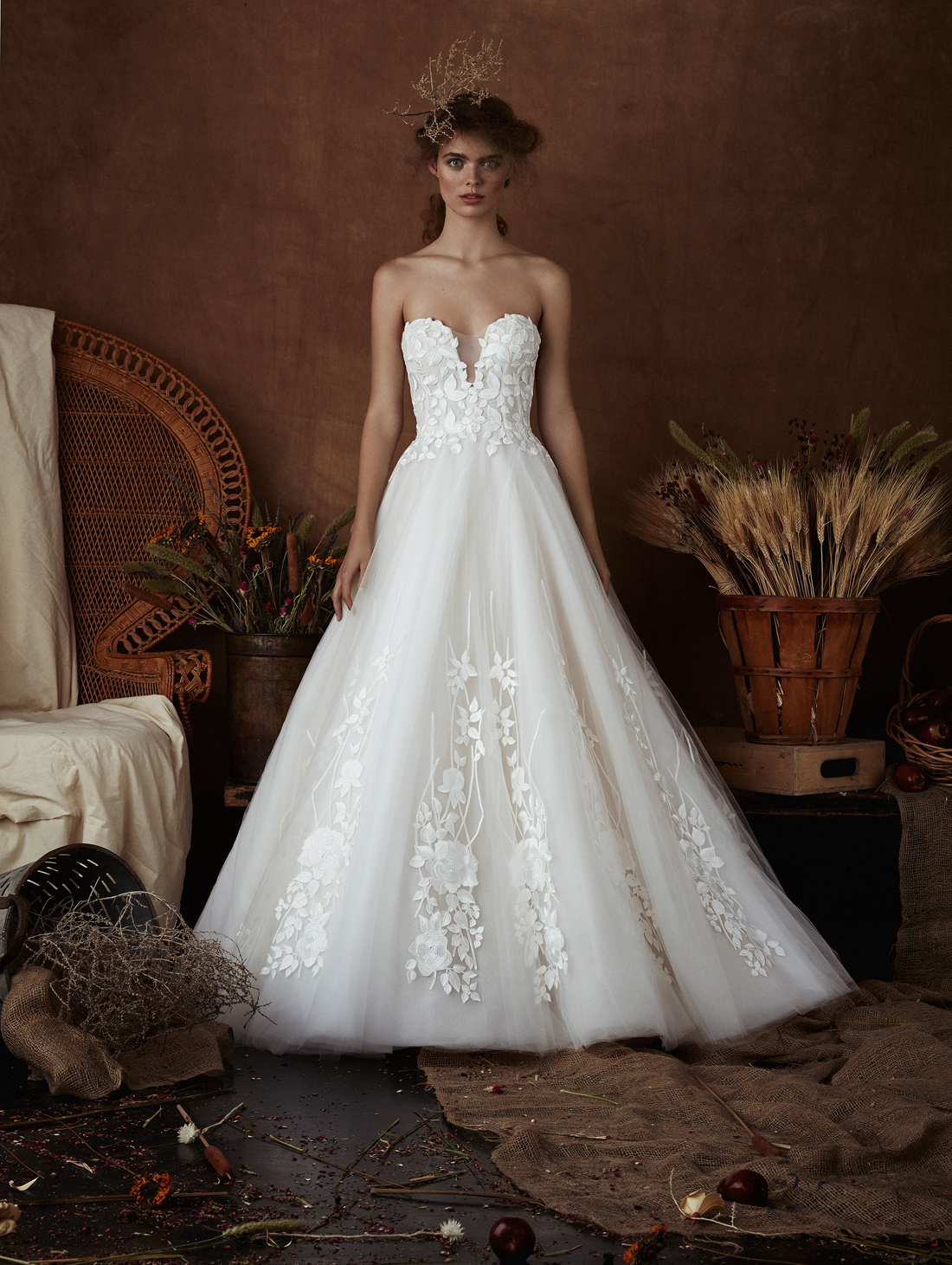 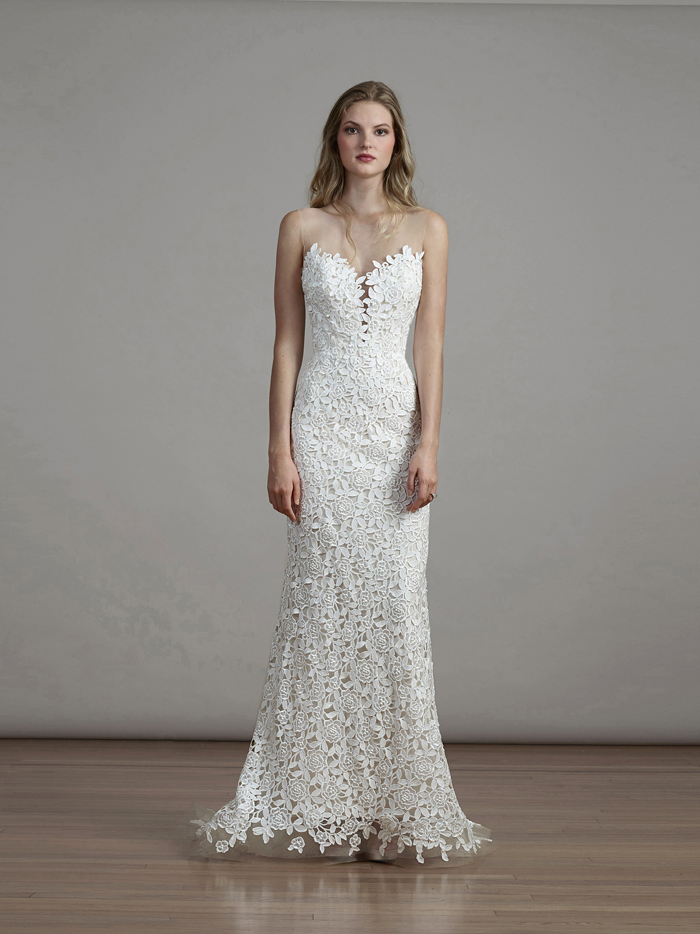 Another popular look at the 2017 Emmys was ladies in red. While brides typically don ivory ensembles, there are some brides who choose to wear red as a part of their tradition or as a dashing look for the reception or after-party. Brides can take inspiration from Jane the Virgin's Gina Rodriguez, Nicole Kidman – the winner of Best Outstanding Actress in a Drama Series for her role in Big Little Lies, Heidi Klum, and Nina Dobrev to wear the bold hue for their celebration. The Ines Di Santo gown shown below is a perfect example of a sexy mermaid style that brides will love. 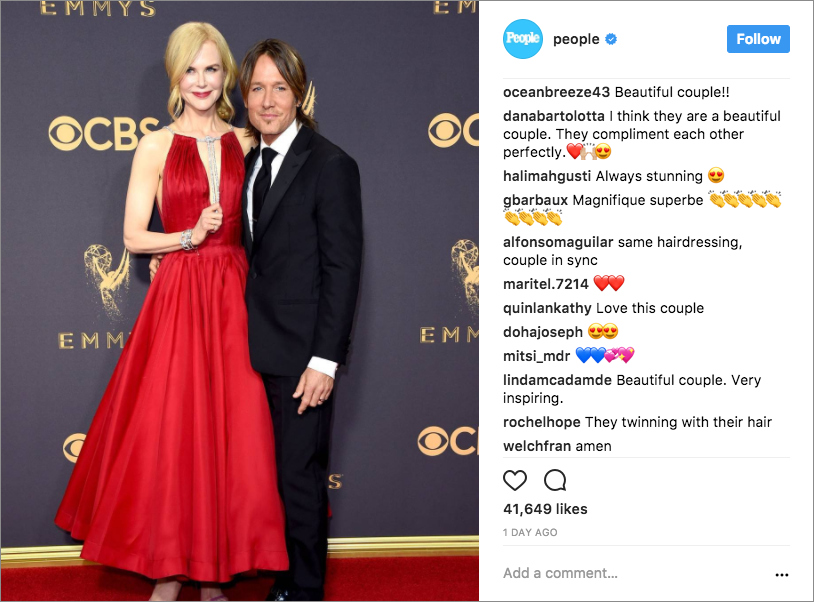 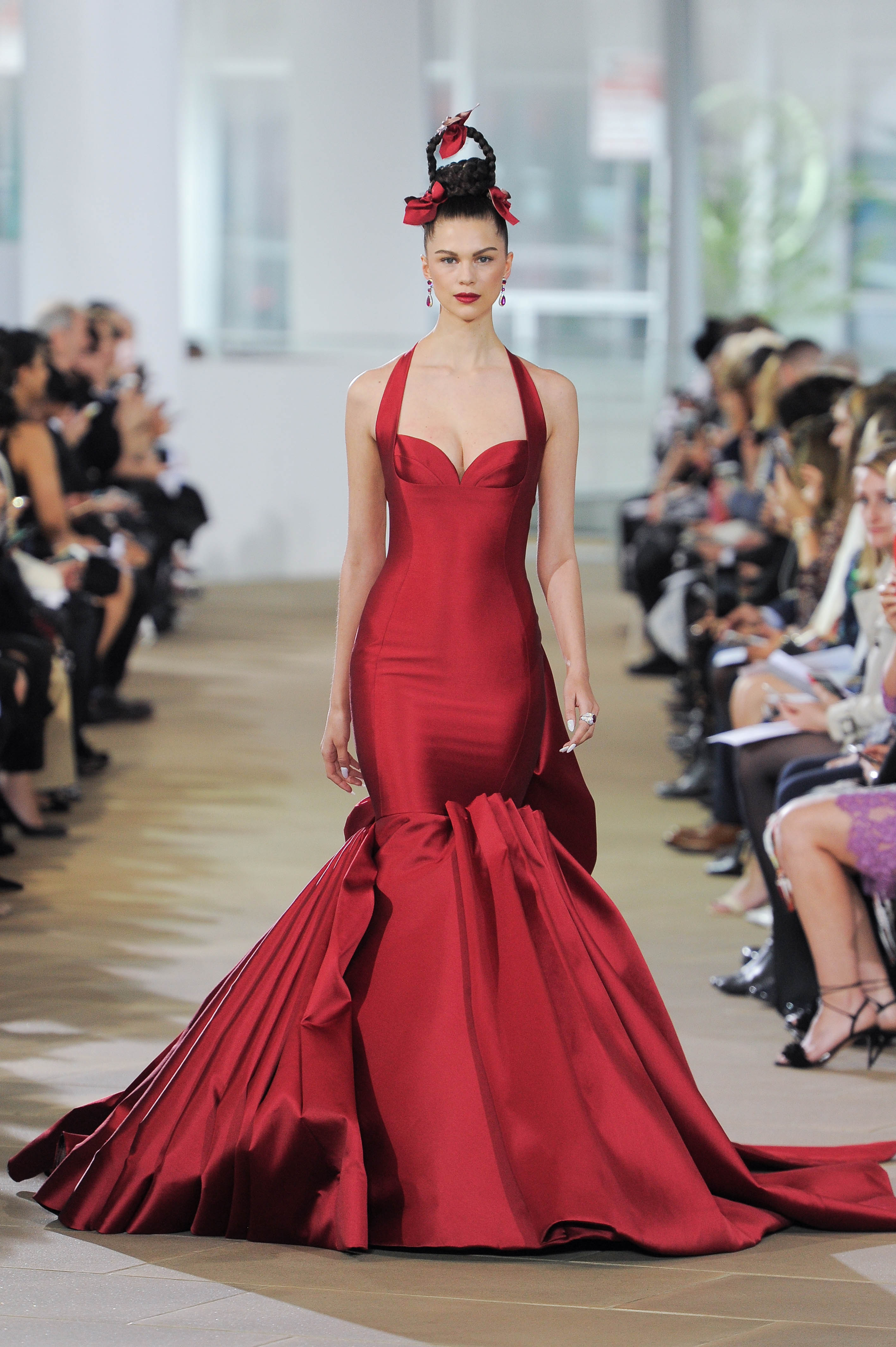 It's safe to say that sequins made quite the entrance on the red carpet! Tracee Ellis Ross, Jessica Biel, Sarah Paulson, Laverne Cox, and Anna Chlumsky – nominee for Outstanding Supporting Actress in a Comedy Series for her role in Veep – all wore sequined gowns. Brides are also sporting the silver-sequin trend, with heavy beading and shimmering details becoming a popular look for fall and winter celebrations. 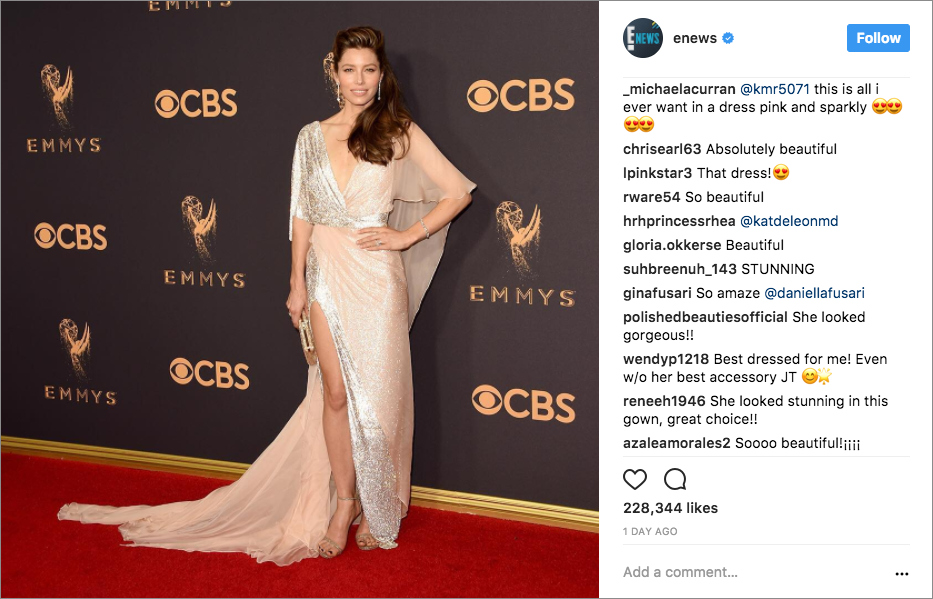 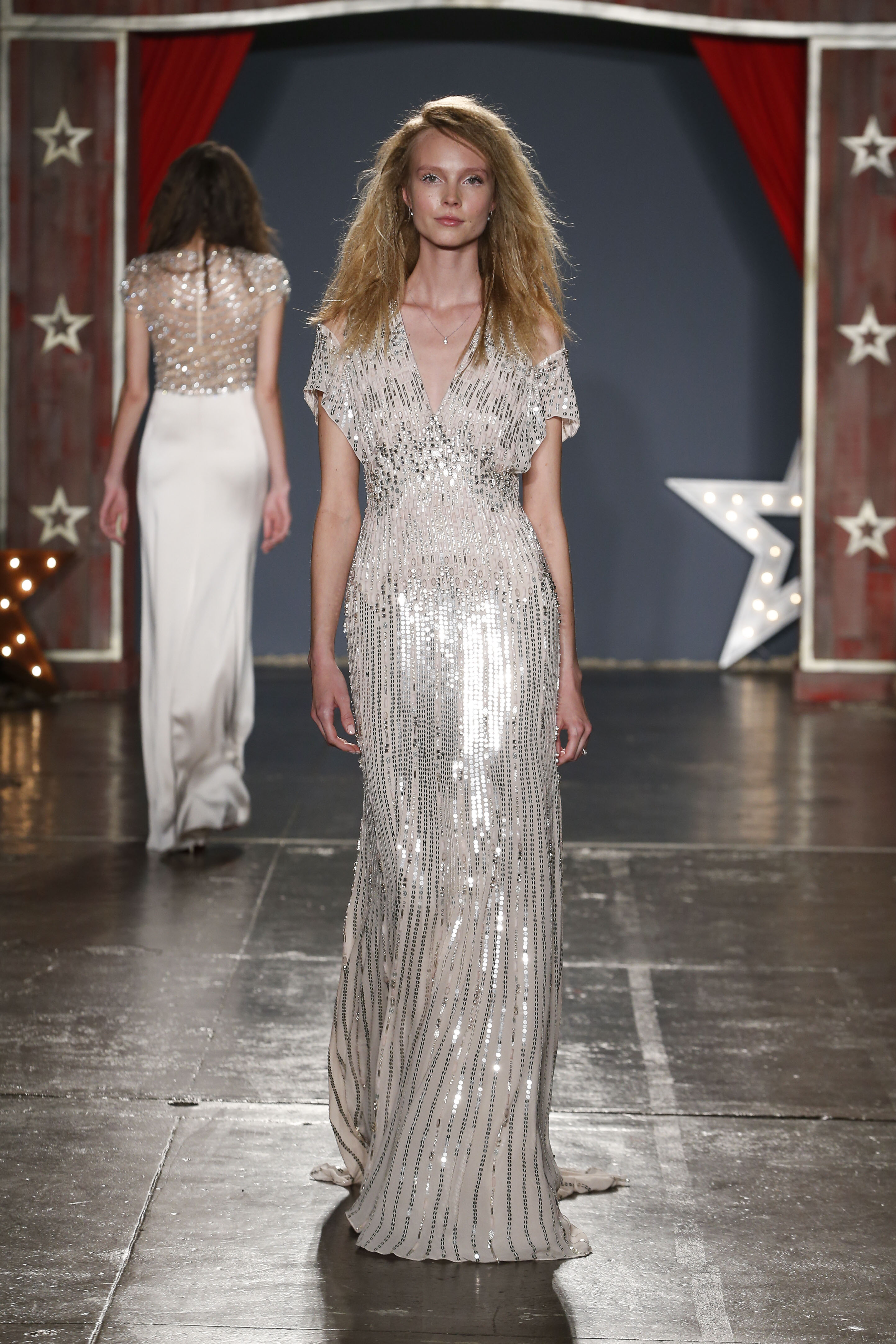 Take a look at the men's fashion trends from the 2017 Emmy Awards, bridal looks inspired by the 2017 Golden Globe Awards, and find more celebrity style here.

10 Videos from Real Weddings to Inspire You