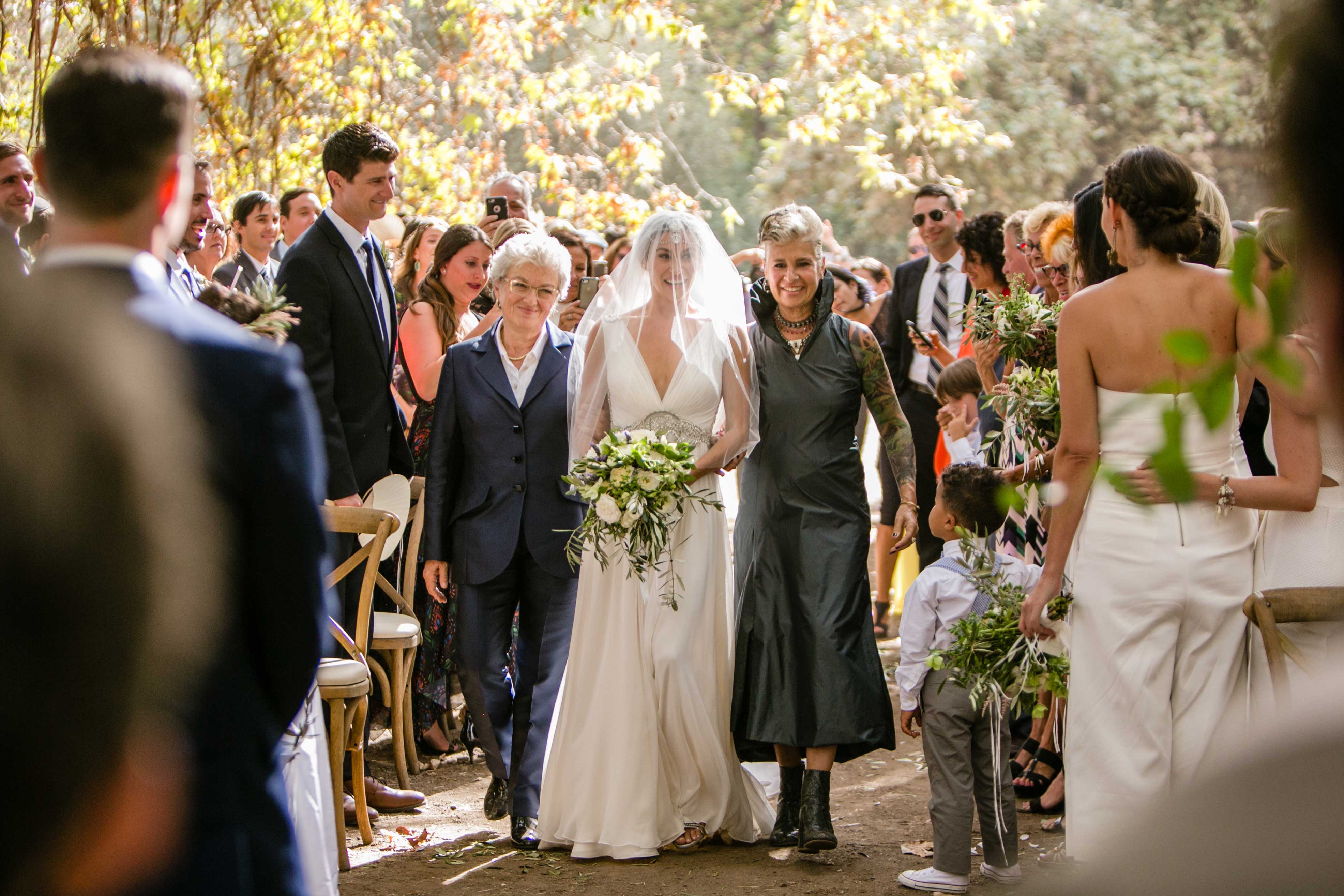 Like many rituals associated with one’s nuptials, the processional for a wedding ceremony has an order that is considered traditional. Though you have probably seen deviations from this, it is typically expected that the officiant and the groom will already be at the altar, with the procession beginning when the groom’s paternal grandparents walk to their seats, followed by the groom’s maternal grandparents, with the bride’s respective grandparents following in the same pattern. Then the groom’s parents will proceed, with the mother of the bride following behind, generally escorted by her son or another male relative. The groomsmen then walk in followed by the bridesmaids in reverse order. The maid of honor then makes her trip down the aisle, with the flower girl and ring bearer representing that it is time for the bride, who is escorted by her father.

Now even amongst brides and grooms that consider themselves traditional with nuclear families, there are subtle variations. For example, the groomsmen may escort the bridesmaids, or the groom may walk in with his parents, as is the case in the Jewish faith. However, for blended families with different parenting situations, or for same-sex couples, trying to make your processional traditional ends up feeling incredibly complicated because it is not a one-size-fits-all situation. To help you put together alternative options, see some ideas below:

If one or both of you are children (or grandchildren!) of divorce, there may be stepparents you feel the need to honor. You are more likely to want to include stepparents if you grew up with them in your life, rather than if one of your parents remarried when you were an adolescent or an adult; however, you should make a point not to exclude anyone in either case. If you are close with both your biological father and your stepfather, it can be a lovely gesture to have them both walk you down the aisle. If that may cause tension with your dad, some brides choose to have one father figure start off the walk, while the other meets in the middle and finishes escorting the bride down the aisle. Otherwise, if you choose to only walk with your dad, or to walk alone, this would be a good way to order the family portion of the processional: The groom’s stepmother walks with the groom’s father, followed by the groom’s mother with her partner – if applicable – or an usher. If the bride has a stepmother, she would go down the aisle next, escorted either by an usher or the bride’s father if the bride plans to walk alone.

If you were raised by two men or two women, you may choose to have them both walk you down the aisle, or one parent may prefer the honor and another will choose a different role – such as giving a toast. As a bride, don't feel like it has to be a man who walks you down the aisle, a mother who raised you on your own is a beautiful choice for an escort.

Same-sex weddings provide an opportunity to examine and subvert gender norms, though of course heterosexual couples may change up their ceremony because of this as well. The two grooms or brides may choose to each walk down the aisle in whatever order they decide, they may walk at the same time with two aisles, or they may choose to walk down the singular aisle together, indicating the step they are taking. For some couples, there may be someone who takes more of a "bride" or "groom" role than another, and choose to follow what's considered a traditional ceremony. Unlike when dealing with stepparents and additional family matters, there is no fear of hurting someone's feelings, so you can do whatever you're comfortable with!

Gather ideas for your wedding processional songs here, discover a step-by-step guide to your ceremony, and view images of gorgeous ceremonies from real weddings in our photo galleries!