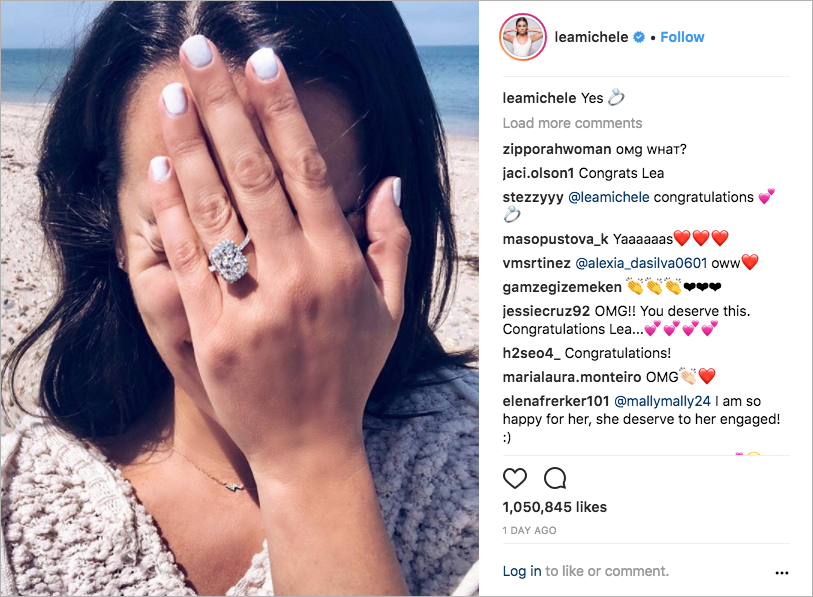 After about a year of dating, actress and singer Lea Michele is engaged to Zandy Reich, president of clothing company All Year Round Clothing (AYR). As many people do, the Glee star announced the news via an Instagram post. If we are to assume the photo was taken shortly after the proposal, it looks like Zandy popped the question during a romantic walk on the beach. Lea wears a cozy sand-hued sweater and covers her face with her left hand bearing the stunning ring. The radiant-cut diamond is reportedly four carats, and is set in a delicate halo with a pavé band. Her nails are kept short with an appropriately bridal white manicure.

In one month, Lea is reuniting with her former Glee costar, Darren Criss, for a nine-city tour through parts of the Midwest and East Coast. Darren, who recently earned rave reviews for his performance in American Crime Story: The Assassination of Gianni Versace, is recently engaged himself. He proposed to his longtime girlfriend Mia Swier late last year. Perhaps the two friends will compare wedding plans while on tour together!

8 Surprising Places You Can Actually Get Married

How to Handle a Proposal Timeline