Whether you're rooting for the Carolina Panthers or the Denver Broncos during Super Bowl 50 this Sunday, a common love of football unites many Americans. Even if you'll just be watching the game for the Super Bowl commercials, the lives of football stars behind the scenes, once the stadium lights have been turned off, is undoubtedly intriguing. We love seeing the weddings and rehearsal dinners of football athletes, and we've gathered some of our favorites below.

From city soirées in Los Angeles to festive fêtes in Texas, we've put together the weddings of NFL players that have graced the pages of Inside Weddings in excitement of Super Bowl 50. In honor of the Denver Broncos fighting for the prize on Sunday, take a look at the vow exchange of quarterback Brock Osweiler as well as the nuptials of tight end Owen Daniels. And although the Seattle Seahawks didn't make it to the big game this year, view the wedding of defensive tackle Brandon Mebane – who won the Super Bowl with his team in 2013, along with the celebrations of some former NFL players.

For more information on each event, click each football player's name or the image collage, and be sure to share your favorites in the comments! 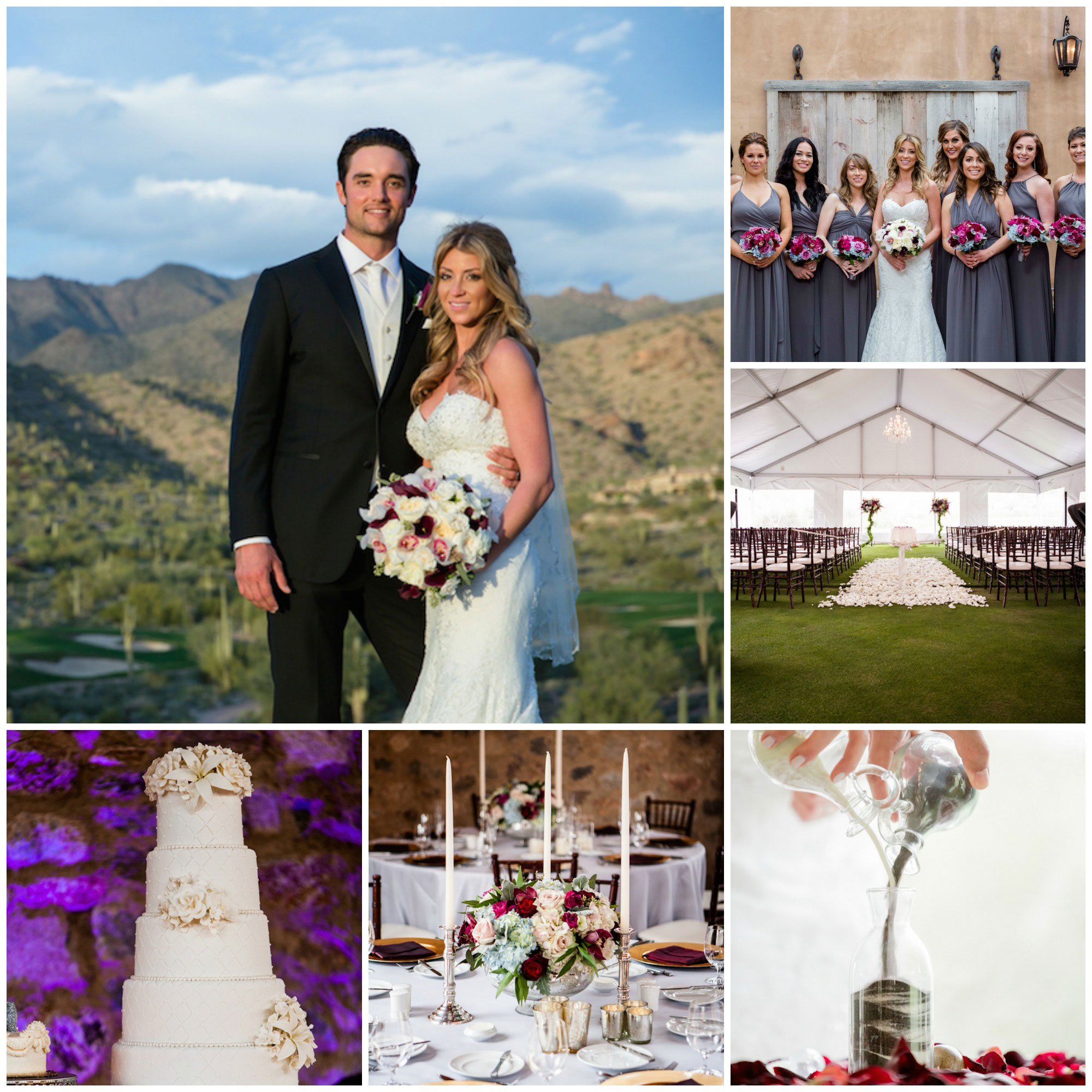 Brock Osweiler first met Erin Costales through a mutual friend and later proposed one night while getting ready for dinner in their home. The couple hosted their nuptials during the football off-season at a Tuscan villa-inspired golf club in Scottsdale, Arizona. Following the heartfelt ceremony, loved ones danced the night away. “One of Brock’s college football coaches got on the microphone and sang ‘Sweet Caroline’ to close out the night – it was amazing!" shares the bride. Photos by Jared Platt Photography; Bridesmaid Gowns by Joanna August; Consulting by Amy Mancuso Events 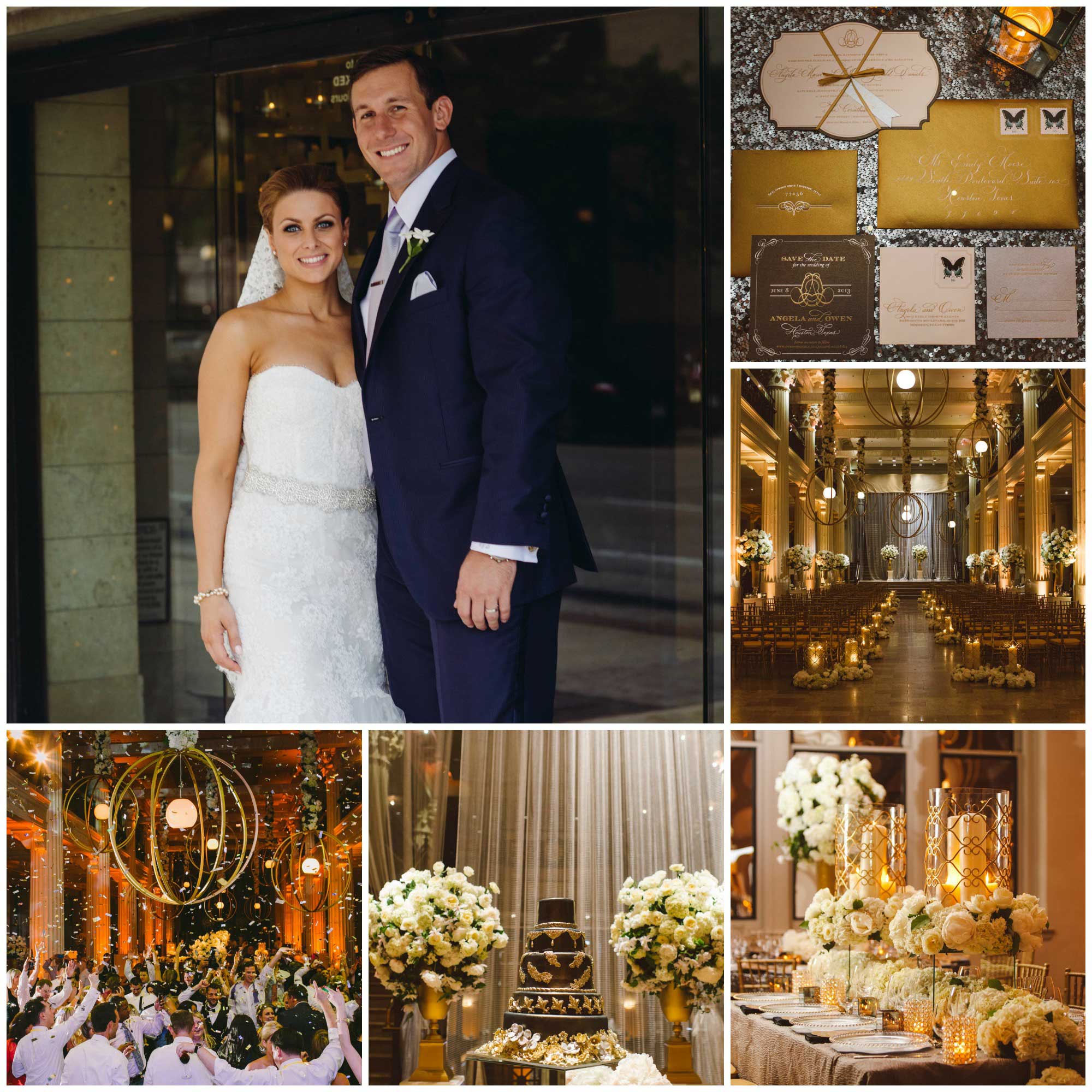 Angela Mecca and Owen Daniels – who played for the Houston Texans at the time – met at a flag football charity event. Three years later, the couple exchanged vows in Texas. Following the ceremony, guests enjoyed a buffet-style dinner and plenty of dancing. To keep the party going, late-night snacks were provided and a confetti cannon erupted during Katy Perry's "Firework." Photos by J. Cogliandro Photography; Bridal Gown by Monique Lhuillier 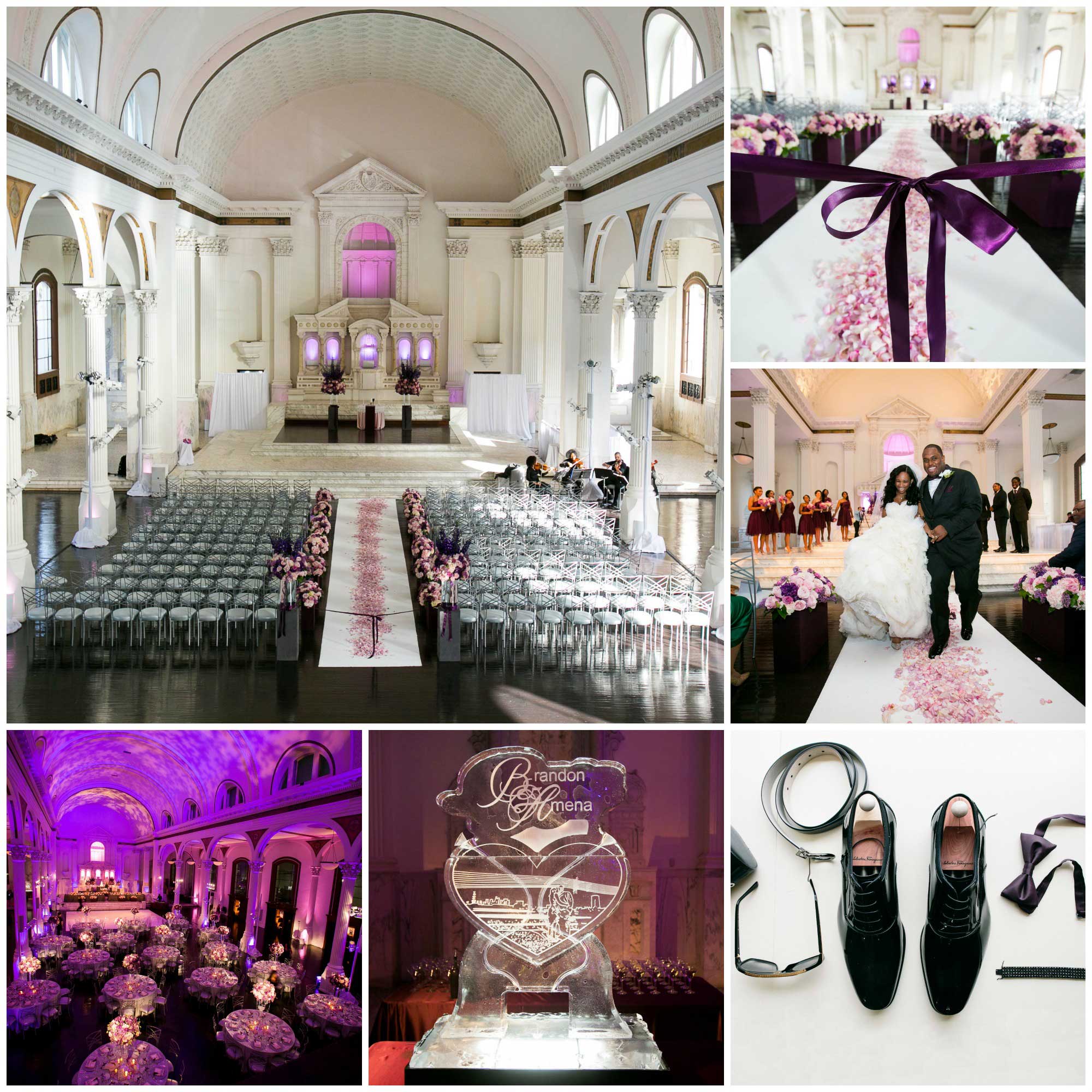 Brandon Mebane was enamored by Amena Jefferson in middle school, but it wasn't until years later in Seattle that the couple's romance began. They exchanged vows at a historical Los Angeles venue and chose an urban-elegant theme. During the ceremony, the couple participated in the African tradition of jumping the broom and later celebrated with loved ones during a chic reception in a grand ballroom. Photos by Callaway Gable; Consulting by Sterling Engagements; Floral Design by The Hidden Garden 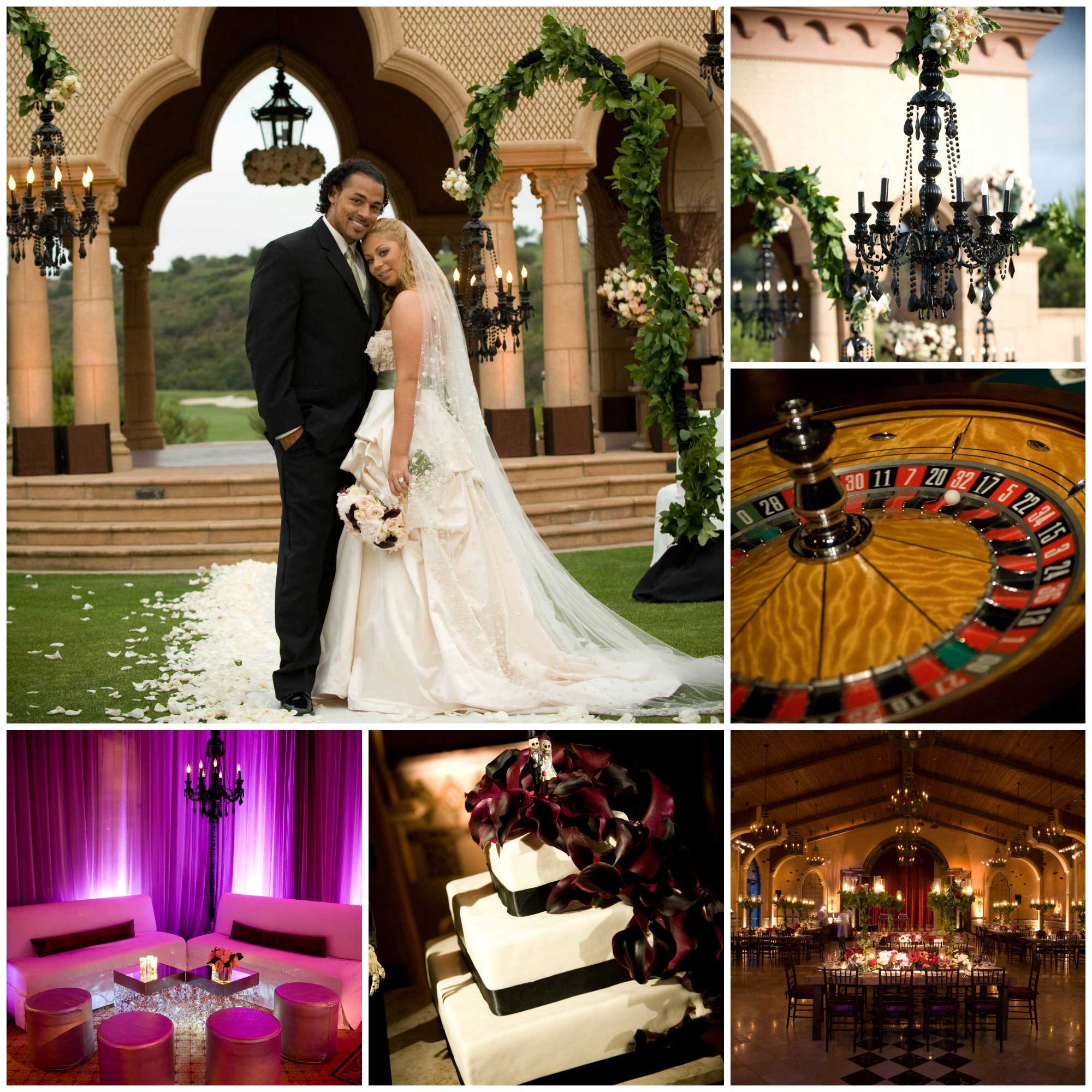 Nicholas Barnett proposed to Amanda Langston over graduation weekend after he had been drafted by the Green Bay Packers. The couple initially wed in a small ceremony on Lambeau Field, yet they held a celebratiton for loved ones in San Diego, California. The celebration featured plenty of entertainment for loved ones: casino games, a special performance by R&B singer Keith Sweat, and a fireworks show. Photos by John Solano Photography; Bridal Gown by Monique Lhuillier; Consulting by Mindy Weiss Party Consultants; Invitations & Calligraphy by Lehr and Black; Rentals by Revelry Event Designers; Venue: Fairmont Grand Del Mar 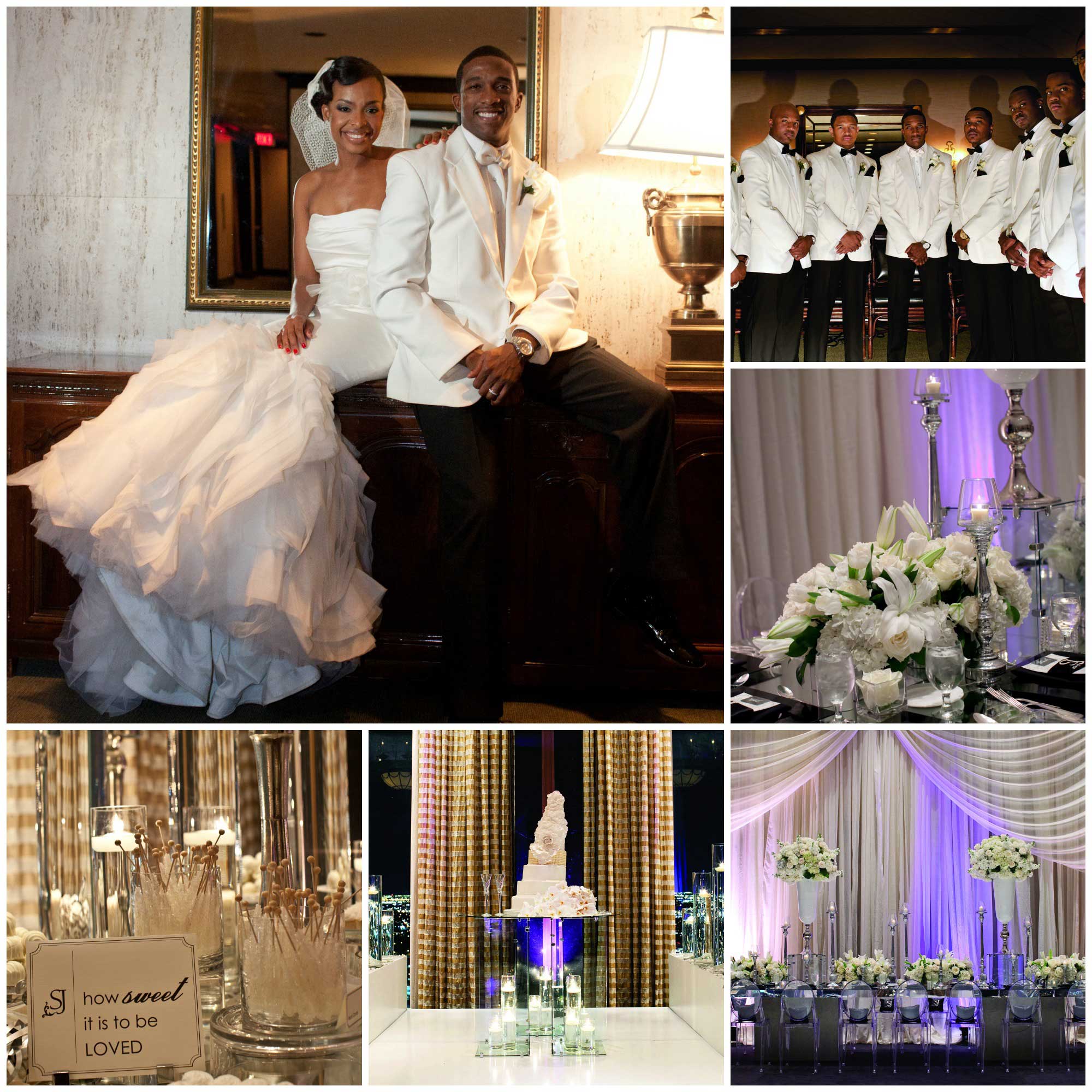 Jarett Dillard proposed to Sarita Minor while on their usual run along Jacksonville Beach. Taking the reigns on planning, Sarita commissioned a theme inspired by old Hollywood for their Houston celebration. “The funniest moment was at the reception when Jarett was like a guest, admiring all the details and color selections,” she shares. “I am honestly grateful though that he trusted me and let me run with it.” Photos by Collins Metu Photography; Bridal Gown by Monique Lhuillier; Invitations & Stationery by Zenadia Design

Pick up a copy of our winter 2016 issue (or download the Inside Weddings app for a digital copy) to see the Texas celebration of Philadelphia Eagles running back DeMarco Murray, and be sure to take a look at the Southern-inspired rehearsal dinner of Detroit Lions quarterback Matthew Stafford! For more celebrity weddings, click here.