All-Star shortstop Carlos Correa has had a lot of milestones for only his third year playing baseball in the Major Leagues. After being the number one overall pick in the 2012 draft, he went on to be the Rookie of the Year in 2015. This year, he was an integral part of the first Houston Astros team to win the World Series. And yet, that wasn’t even the biggest moment of the night for the 23-year-old.

After the initial celebration with his team on the field, Carlos was being interviewed by baseball analyst Ken Rosenthal, who was in on the shortstop’s plan, when he took the opportunity to say that he was about to take another important step in his life. Carlos then called out to his girlfriend, Daniella Rodriguez, before getting down on one knee and asking her to marry him. Many people find stadium proposals at a sports game to be corny, but we think this might be an exception! Watch him pop the question in the video below.

It’s not Daniella’s first time in the spotlight – the 22-year-old was Miss Texas Teen USA in 2013 and Miss Texas USA in 2016. She and Carlos went public with their relationship last fall but met when she threw the first pitch at an Astros home game in August 2016. Given baseball’s schedule, it’s likely the couple will marry next fall or winter (if not the year after that), assuming they don’t have a quick elopement before spring training starts. In the meantime, we’ll have to be satisfied staring at Daniella’s gorgeous, pear-shaped diamond set in a delicate halo and split-shank setting. 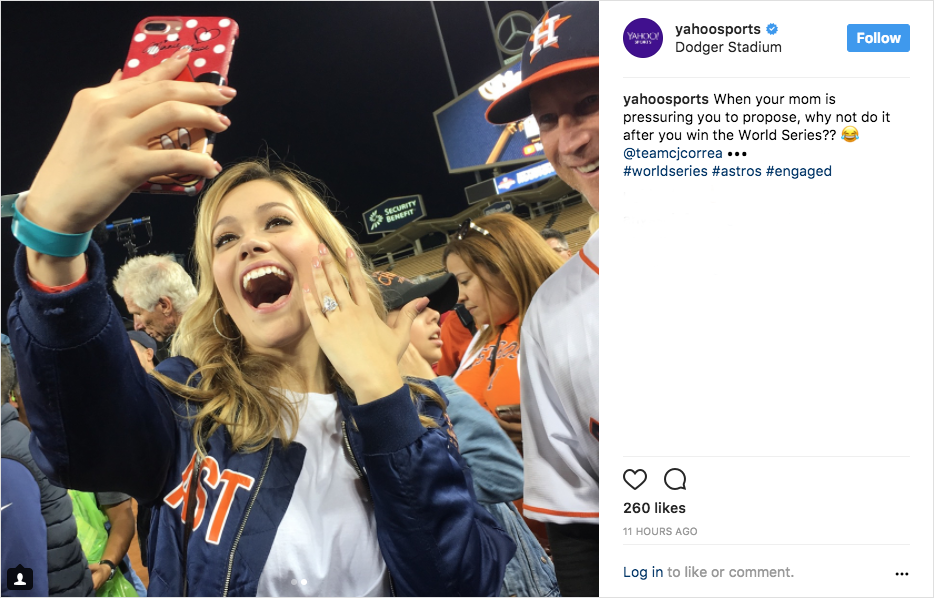 Fellow Astros teammate, Justin Verlander, is expected to marry supermodel Kate Upton this month in Tuscany, Italy. Though they may have lost the World Series, Dodgers players Justin Turner, Joc Pederson, Kiké Hernandez, and Alex Wood all have wedding bells in their future as well.

See how to incorporate baseball details into your wedding day and watch the most romantic proposals from your favorite TV shows.

The Best Music Ideas for Your Wedding Video Songs