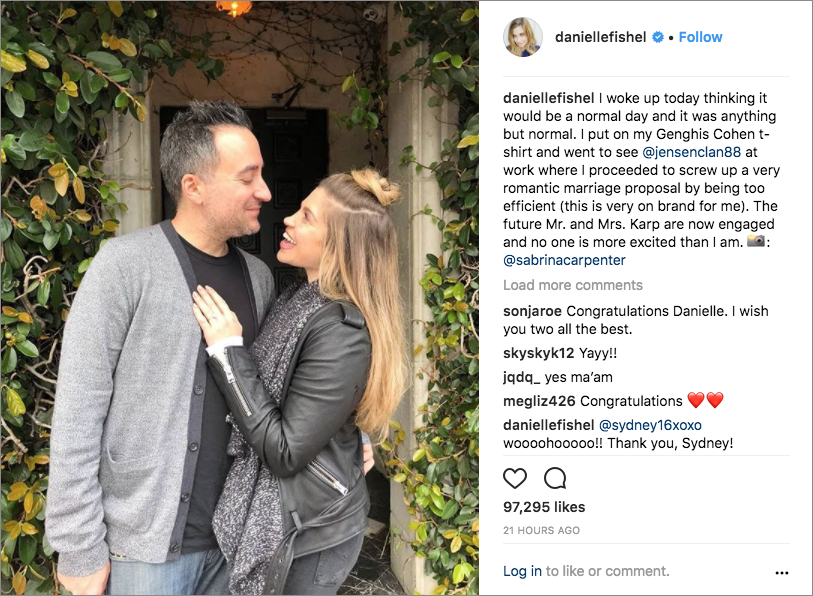 Danielle Fishel, the actress and host best known for playing Topanga Lawrence on both Boy Meets World and Girl Meets World, is engaged! Judging from her Instagram post announcing the news, it looks like the proposal was a complete surprise. She noted that she expected it would just be a normal day and that she “proceeded to screw up a very romantic proposal by being too efficient.” Fans of her Disney Channel series will love the fact that Girl Meets World costar and singer Sabrina Carpenter is the one who took the adorable post-engagement photo.

Who’s the lucky guy? Rapper, writer, and producer Jensen Karp (previously known as Hot Karl), who is an executive producer of the TBS show Drop the Mic and wrote the memoir Kanye West Owes Me $300. He shared the same photo as his fiancée on both his Instagram and Twitter profiles revealing that the pair went to high school together, but only knew each other in passing.

Though Danielle notes on her Twitter account that she does not care about a big wedding or where they honeymoon, we can’t help but hope for a celebration that embraces our nostalgia for the 90s. Will former Boy Meets World costars Ben Savage and Rider Strong be there on the big day? How about her famous prom date, Lance Bass from *NSYNC? Of course, Jensen has his own celebrity friends as well. In fact, Paramore’s Hayley Williams was one of the many congratulating the pair on their engagement. While it’s safe to say Danielle is unlikely to wear the same gown as when her character got married on Boy Meets World, we’ll just have to wait to see the details once the big day arrives.

For more entertainment news, read all the wedding details from the season finale of This is Us and learn more about country star Brett Young's proposal.