It’s quite an exciting time to be Sophie Turner! The final season of Game of Thrones premieres in a week, the new X-Men movie Dark Phoenix – focused on her character Jean Grey premieres in early June, and she’s months away from marrying Joe Jonas! The groom-to-be has been making headlines himself – he and his brothers Nick and Kevin reunited The Jonas Brothers and their first single “Sucker” (which has a music video starring Sophie as well as Nick and Kevin’s wives Priyanka Chopra and Danielle Jonas, respectively) quickly became a smash hit. They also just released a second single – “Cool” – which quickly amassed millions of views on YouTube. With both Sophie and Joe’s careers going so well, fans are eagerly anticipating their upcoming nuptials. 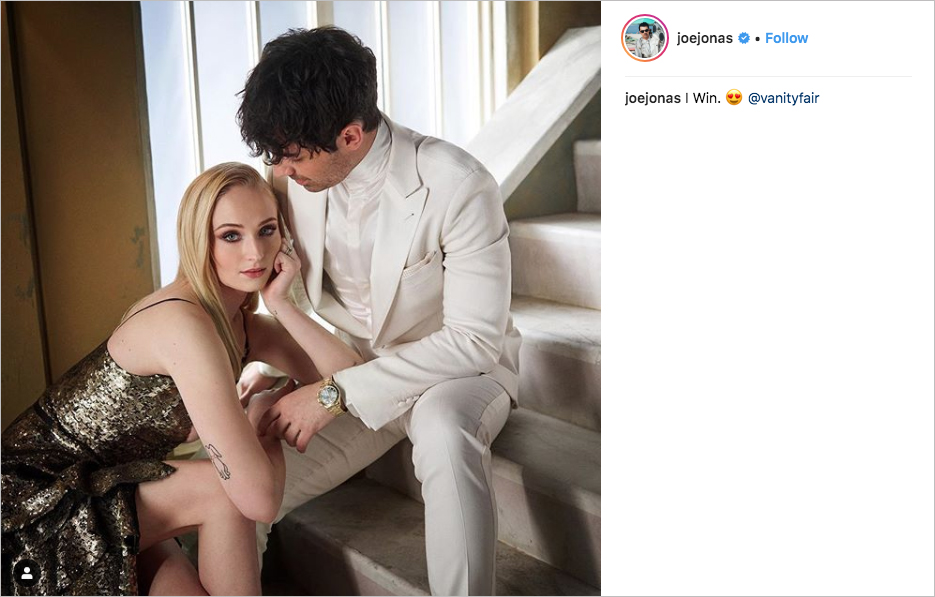 At the premiere party for the final Game of Thrones season, Sophie confirmed that her onscreen sister and real-life bestie Maisie Williams will be one of two maids of honor. A reporter for Entertainment Tonight said that Maisie had told her she was already thinking about what to wear to the wedding when Sophie joked that there was no reason to think about it, as she’d be providing the bridesmaid dress. See for yourself in the interview below!

Earlier this year, Joe dropped some hints about the wedding as well. While on The Late Late Show with James Corden, Joe reveals they will be getting married in the summer. Considering Dark Phoenix will be released on June 7, it’s likely that the nuptials will occur after that, as Sophie will be busy doing press. Due to the bride’s family hailing from England, a rugby match may take place the day before the couple says “I do.” Watch the interview below and find out what he learned not to do from his brothers’ earlier weddings.