Traditions – they’re rather common in the wedding world. From the white wedding dress to the first dance – there are quite a few practices considered to be “must dos” by those who subscribe to proper etiquette. However, in modern times, many brides and grooms are choosing to eschew customs for a multitude of reasons: they don’t feel they're necessary, they’re based on outdated/offensive views, there’s no time for them, etc. One – or two – such practices is the concept of the “toss.” This reception tradition involves the bride throwing her bouquet into a crowd of single ladies and the groom flinging his new wife’s garter into a cluster of single men. In each scenario, the person who catches the object is said to be the next to marry. 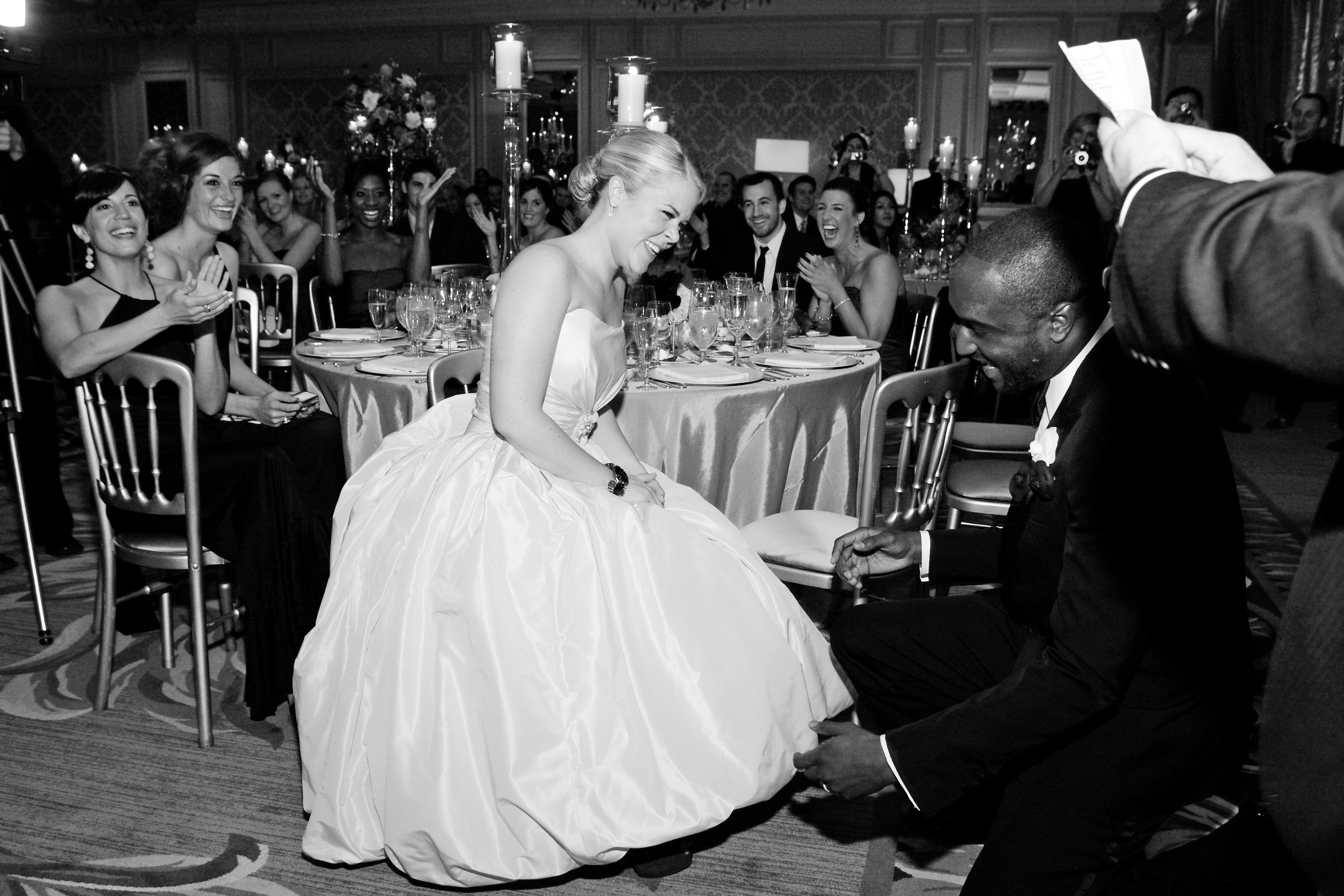 This trend has been slowly dwindling in popularity in recent years – mostly due to it’s outdated meaning and the general awkwardness that can be associated with it. You may be wondering whether or not a “toss” would work in your wedding. To help you make a decision, we’ve listed the “pros” and “cons” of including the tradition in your celebration.

- It’s another reception activity for guests. If you’re afraid there might be too much downtime, or you’re just excited about having a variety of guest-participation activities available, this could add something extra to your soirée.  Get your attendees up and engaged – even if they don’t care much for dancing.

- You can alter it to become something new and fun. There are plenty of ways to reinvent this custom. Instead of tossing your bouquet, give it to the longest-married couple at the reception. Break your cluster of flowers apart and give each of your important gals (bridesmaids, maid of honor, mothers of the bride and groom, etc.) a bloom. In lieu of your garter, consider having the groom toss his boutonniere. Do what makes sense to you!

- The photographer will capture some great shots. Action shots from a professional camera are interesting and dynamic. Capturing the look on the faces of your nearest and dearest – as well as the look on your own – along with the object flying through the air would make a unique addition to your wedding album.

- You may make some feel uncomfortable – including yourselves. The tradition itself does not lend itself to the most forward thinking of marriage ideals, which in itself could make the practice a little unsettling to some. However, even beyond that, it’s very easy to let the “toss” back you into a complicated corner. For example, if you don’t have many single friends, asking the few you do have to gather together might bring attention they don’t want. What’s more, the retrieval of the garter – and sometimes, the toss itself – gets borderline inappropriate for a public setting. In other words, things can go south quite quickly.

- There’s a chance someone may get injured. Some really get into the spirit of the “toss,” which can be fun, but also a little dangerous. Jumping, reaching, sometimes tackling – even on accident – can occur, and the last thing anyone wants at their nuptials is for someone to get hurt or having to call an ambulance. It may sound dramatic, but it’s happened at plenty of weddings in the past.

- Your bouquet and garter are no longer yours. Participating in a bouquet or garter toss will ensure that you lose those items to the people who catch them. Of course, if your bouquet is composed of real flowers, it will eventually wilt, but there are ways to preserve a few blooms to commemorate the day. If you’ve taken special care to personalize the garter, you’ll probably want to keep it as an extra keepsake. Asking for these items back once tossed might strike some as strange, especially if they subscribe to the superstition surrounding the practice.

Discover more wedding traditions by learning the differences between American and British weddings, see 10 subtle ways to include “something blue” in your big day, and fawn over our gorgeous real weddings.

Songs to Consider for the Garter Toss

These music choices might help this tradition be a little less awkward.

If these traditions aren't for you, get ideas for other options.

Songs for the Bouquet Toss That Aren't Overdone

Avoid the cliches by considering one of our suggestions.