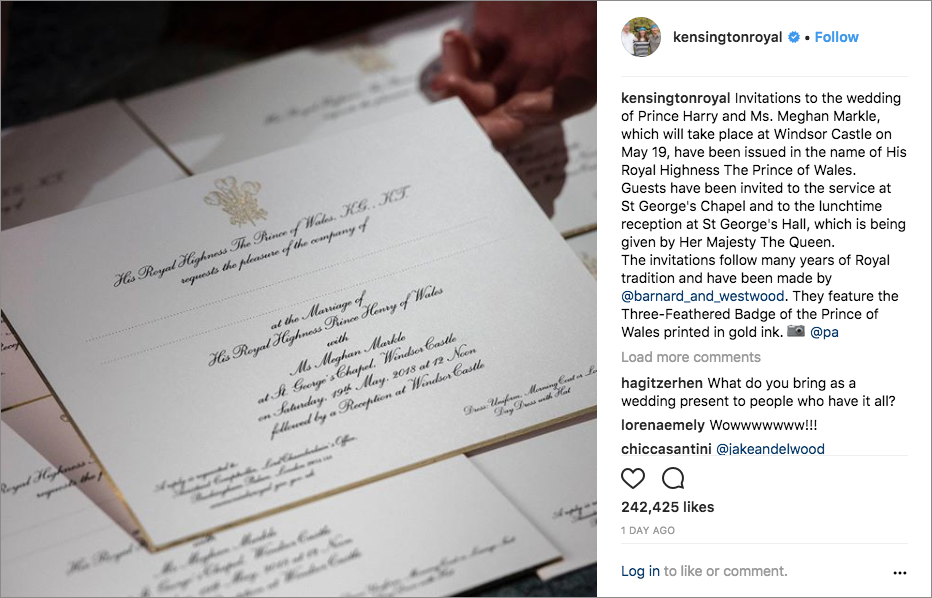 As many people wait with bated breath to find out details about the royal wedding, there is at last some news to report. We know what the invitations look like. Naturally, they are very traditional – no trendy watercolor for the royals! However, people may be surprised that Prince Harry and Meghan Markle went with a more formal font than Prince William and Kate Middleton had for their own nuptials. There is a modern touch though – guests are permitted to RSVP via email.

Through the Twitter account of Kensington Palace, it was revealed that the stationery features the Three-Feathered Badge of the Prince of Wales in gold. Unlike Prince William’s wedding, which was hosted by Her Majesty the Queen, Prince Harry and Meghan’s big day is being thrown by the father of the groom – Prince Charles, the Prince of Wales.

Eagle-eyed fans will catch that the names of both the bride and groom are noteworthy on the invitations. In addition to his royal title, the prince is referred to by the long form of his name – Henry. That’s right, Harry is a nickname! Yet his future wife goes the other route. Though her full name is actually Rachel Meghan Markle, she is listed as Ms. Meghan Markle because she has always gone by her middle name. If you’re wondering why she’s “Ms.” when the Duchess of Cambridge was “Miss Catherine Middleton” on her invitation, it is due to her previous marriage. Most modern couples choose to do away with honorifics for their stationery, but that’s not exactly an option for the royal family!

For more on Prince Harry and Meghan Markle, read Mindy Weiss' predictions for their wedding, see their engagement photos, and find out what traditions they may adhere to.