Weddings are meant to celebrate the love that two people share as well as their commitment to one another for the rest of their lives. We at Inside Weddings love nuptials of all varieties – and this goes for the couples themselves as well. In honor of June being National Pride Month, we wanted to share inspirational imagery from some of our favorite same-sex ceremonies and receptions featured in the pages of Inside Weddings and on InsideWeddings.com.

In addition to feeling the beautiful love each pair has for one another, these events showcase personalized details meaningful to the couple in various design elements that can also offer ideas to affianced duos regardless of their sexual orientation. The décor and details are filled with inspiration for a number of wedding styles and themes and also represent the personality and tastes of the marrying pair – which we see more and more couples doing in order to put their own spin on the celebration. From stunning rooftop ceremonies, to surprising wedding entertainment, to luxurious reception décor, the couples behind these LGBTQ weddings added special details into their big days that wowed the friends and family in attendance to celebrate their love.

Take a look at the events below, and be sure to click on the link below each image to see more inspiration from these real weddings!

Seven years after Dr. Richard Shillabeer and Mr. Freddy Lopez first met over Thanksgiving Weekend, they welcomed friends and family to their luxurious Los Angeles wedding, which took place on the same holiday weekend. “We always knew we wanted to be married, [so] we discussed and planned how it would all unfold,” shares Freddy. First, Richard asked Freddy; then, they purchased their rings; and to come full circle, Freddy asked Richard. Photos by Fitz Carlile Photography; From Real Wedding: Luxurious Wedding with Personalized Details in Downtown Los Angeles

As a wedding and event designer, Joe Mineo of Joe Mineo Creative became both the wedding professional and the groom for his nuptials to husband Gary Bitner. Selecting Waterstone Resort and Marina in Boca Raton, Florida, the couple planned their December wedding to feel chic and wintry with bright accents, shimmering details, and a warm ambience. Centerpieces were stunning, and each guest's place setting was topped with a single orchid. Photos by Nathan Migal 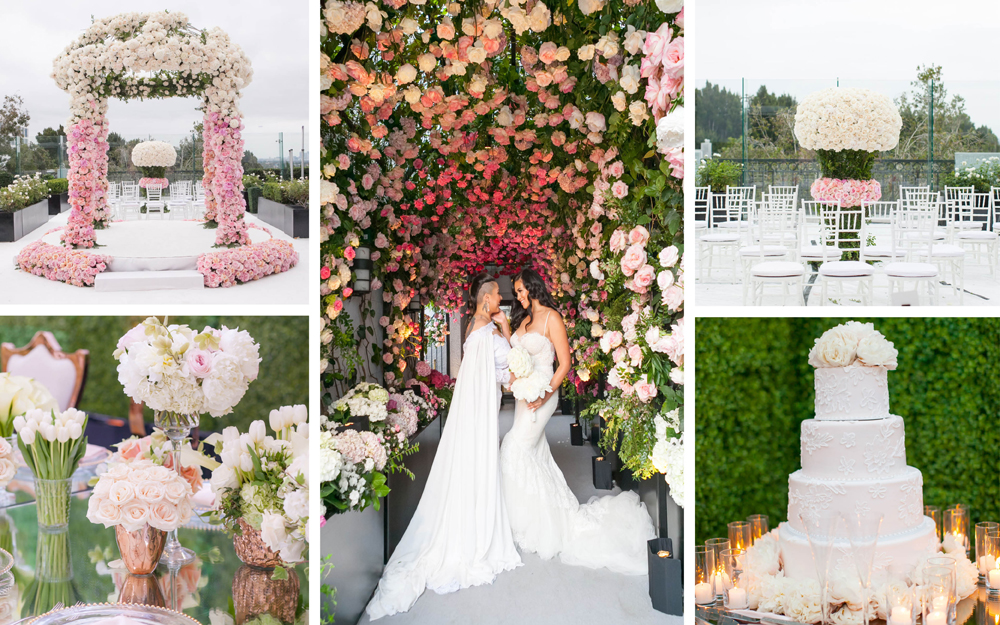 Alyssa and Jasmine have always prided themselves on being a rather spontaneous couple and after becoming engaged, they decided to plan their nuptials in secret. “We decided to disguise the wedding as a lavish birthday party for Alyssa,” explains Jasmine. “We wanted something different, unique, romantic, and most of all, ‘us!’” Photos by Simone Photography; Planning & Design by International Event Company; From Real Wedding: Gorgeous Rooftop Wedding Ceremony & Reception in West Hollywood 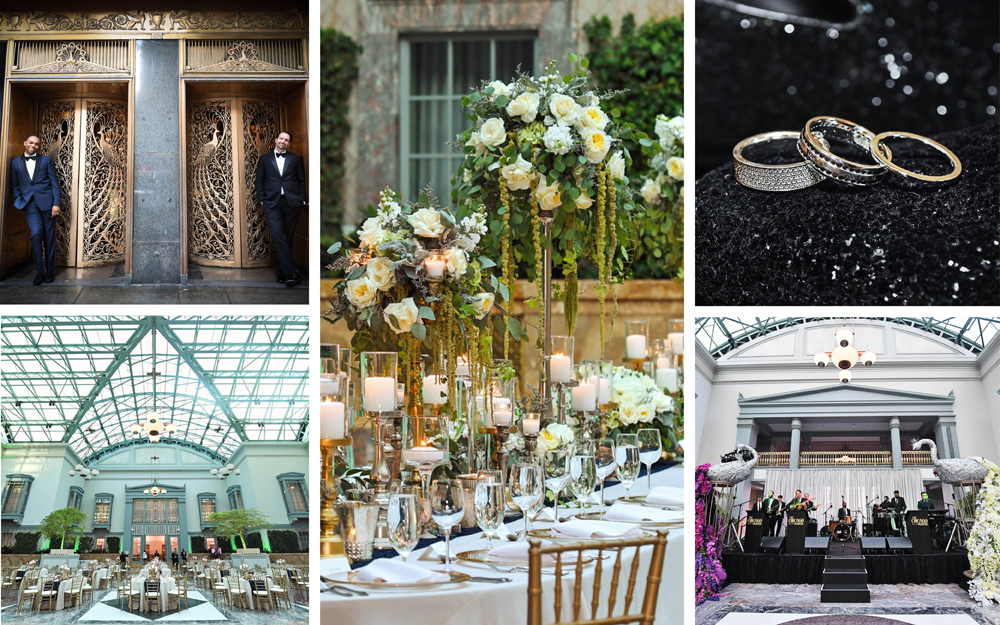 Though Glenton and Jeffrey were legally wed the day prior, they celebrated with friends and family at a gorgeous Chicago venue with a fairy-tale theme inspired by their favorite childhood classics: Alice in Wonderland, The Secret Garden, and Beauty and the Beast. Photos by Carasco Photography; Entertainment by The Chicago Players for Gold Coast Events; From Real Wedding: A Personalized, Fairy-Tale Wedding with Fun Entertainment in Chicago 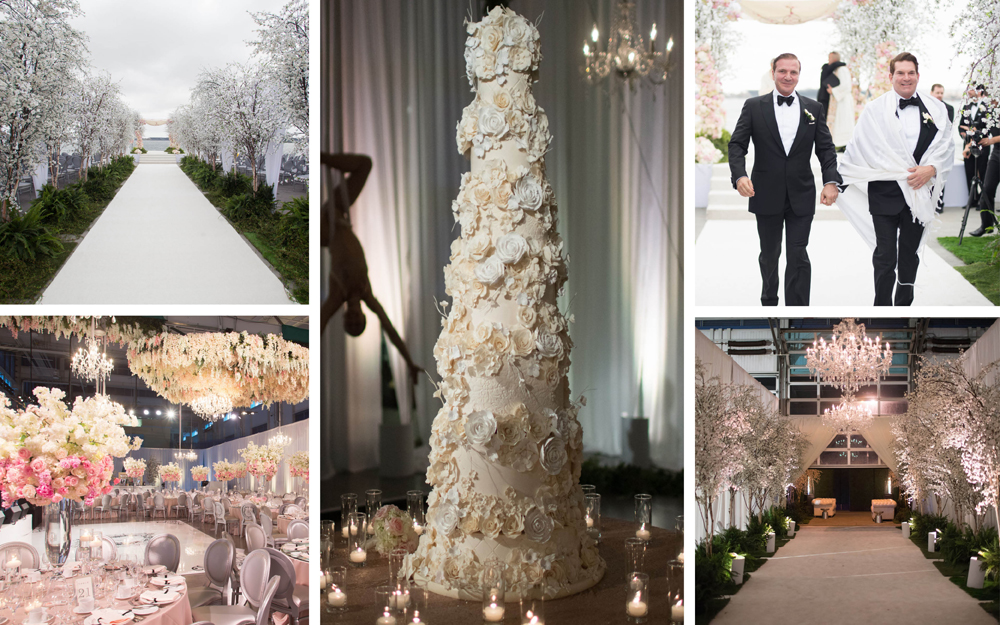 Jose and Ross invited loved ones to celebrate their luxurious San Diego wedding filled with personalized elements. “I am a New York Jew and Jose is Mexican Catholic,” Ross shares. “As such, we had a rabbi, a priest, and one of our best friends marry us. We included most of the traditions of both faiths, and it was magical, as the two families got to experience different cultures.” Photos by John & Joseph Photography; From Real Wedding: Opulent Same-Sex Wedding Ceremony & Reception in San Diego, California 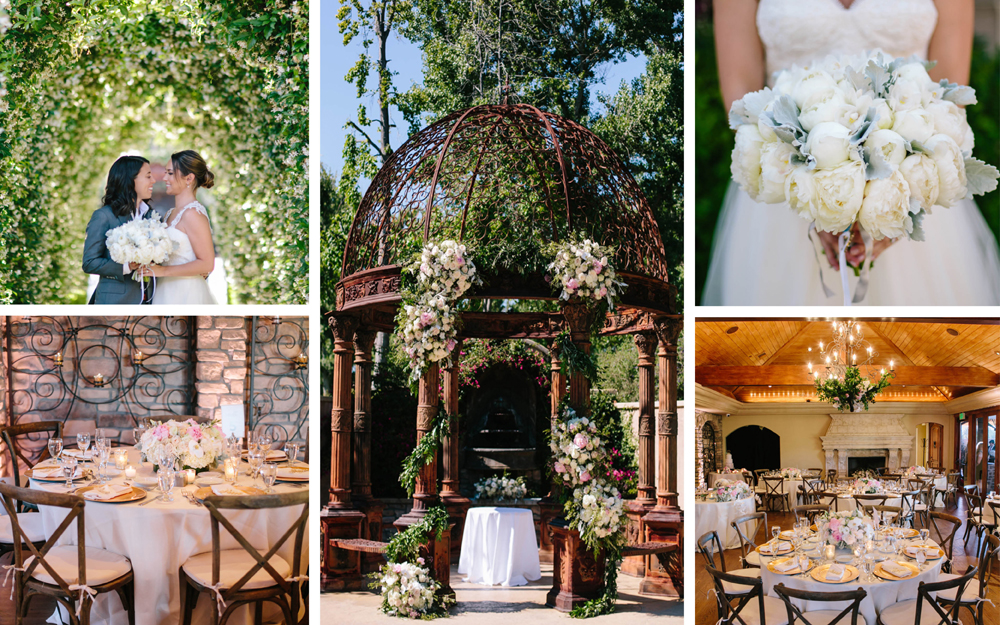 A color scheme of dusty blue, grey, champagne, and light pink were selected for Briana and Lauren’s big day, which featured a soft, romantic look desired by the couple. “We wanted it to be pretty much as traditional as possible,” Briana divulges. “We both had our fathers walk us down the aisle and both wore something old, new, borrowed, and blue.” Photos by Heather Kincaid; Planning & Design by Tessa Lyn Events; From Real Wedding: Romantic Outdoor Wedding with Soft, Rustic Elements & Lush Florals 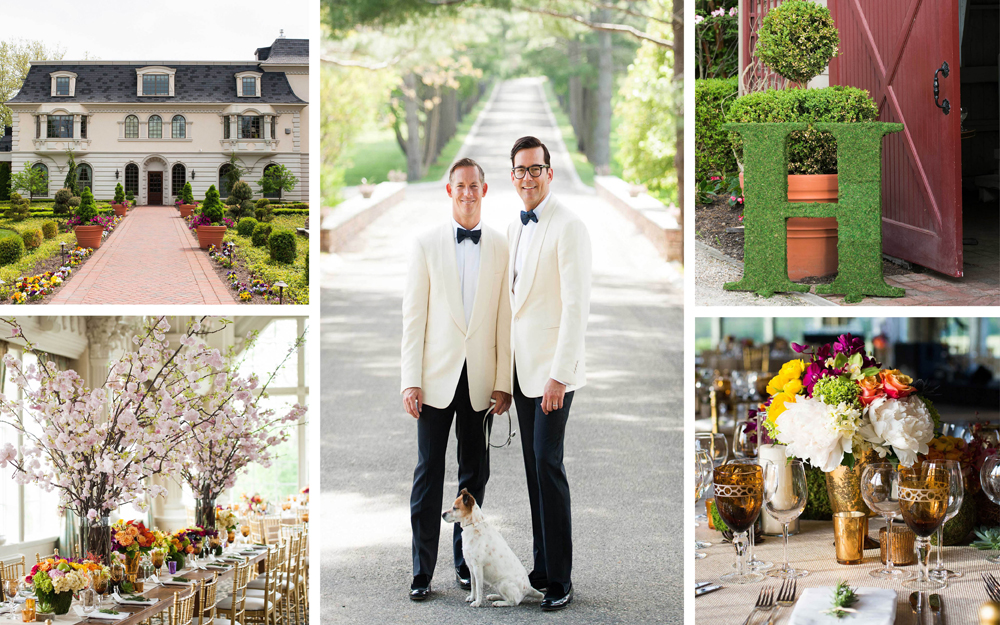 While working as a flight attendant on an aircraft bound for London, Michael met his future husband Brian, a business-class passenger on the flight. Though they had discussed marriage during their seven-year relationship, they were “never sure about the how, when, and where,” explains Brian. “When the opportunity to marry was made more feasible through the Supreme Court ruling allowing same-sex marriage, we felt we wanted to make publicly permanent that which we already felt in our hearts.” Photos by Images by Berit, Inc.; From Real Wedding: Sophisticated Wedding with Organic-Elegant Theme at an Estate in New Jersey 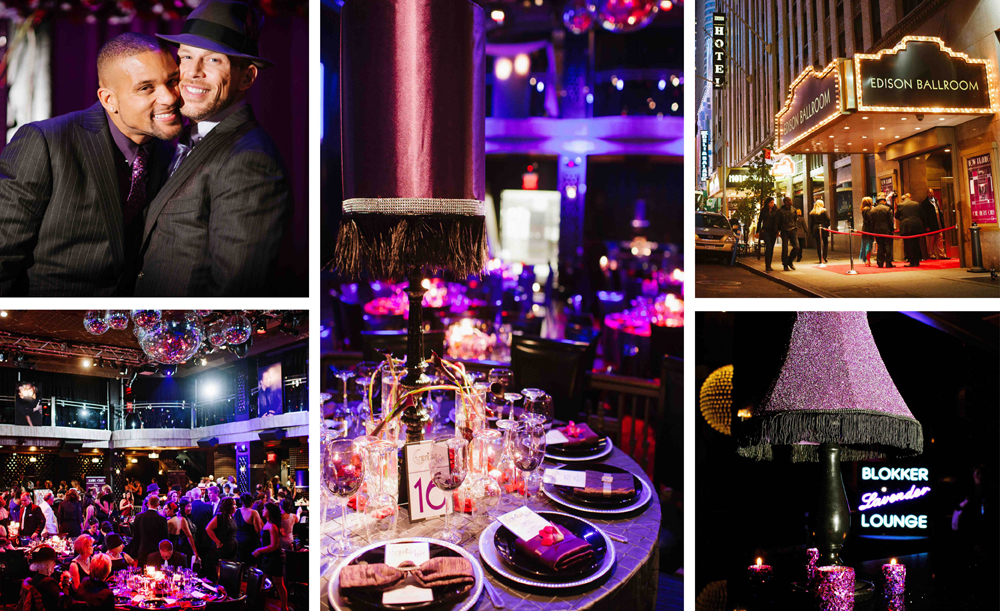 Scott and Shaun – known to most as Shaun T of the Insanity workout program – celebrated their wedding at a historic ballroom in New York City. The pair organized a 1930s glam-themed wedding featuring personalized elements and surprise performances throughout the evening. Photos by Turn Loose the Art; From Real Wedding: Insanity Creator Shaun T's Broadway-Themed New York City Wedding 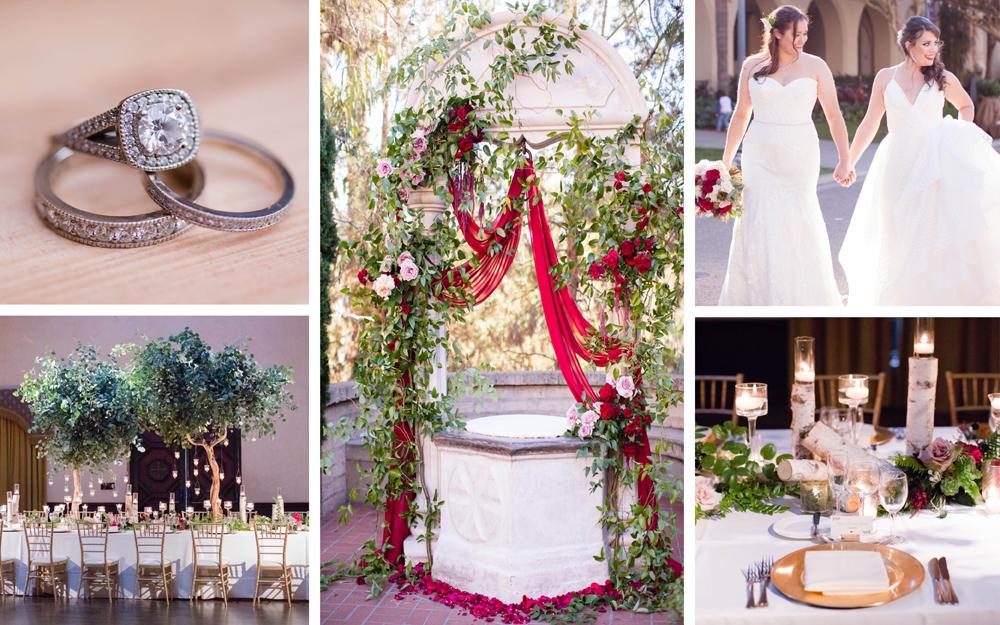 After proposing on a trip to Italy, Erin and her fiancée Yolanda started planning a fall San Diego wedding with a color palette inspired by the wine region where they became engaged. Towering trees decorated reception tables and personalized touches filled both the ceremony and reception. Photos by Acqua Photo; From Real Wedding: Balboa Park Wedding with Wine-Inspired Color Scheme in San Diego 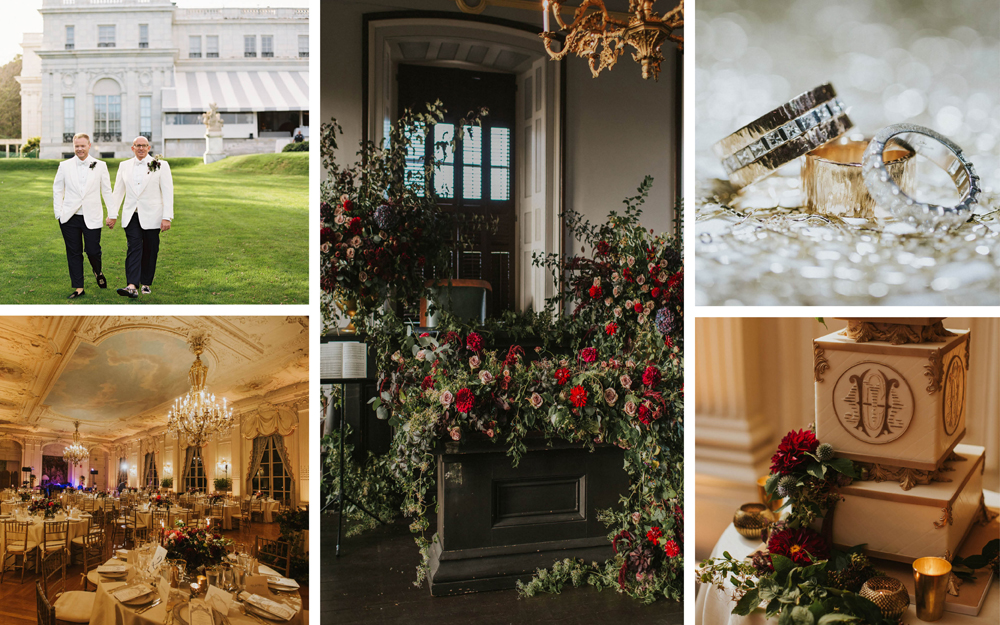 After a surprising “flash mob” proposal, Christopher and Michael started to organize the details of their Newport, Rhode Island wedding. They chose a bold palette of ivory, gold, burgundy, and navy, and incorporated Ukranian traditions into the ceremony in honor of Michael’s roots. Photos by Steve DePino; From Real Wedding: Sophisticated Wedding at Historic Venues in Newport, Rhode Island 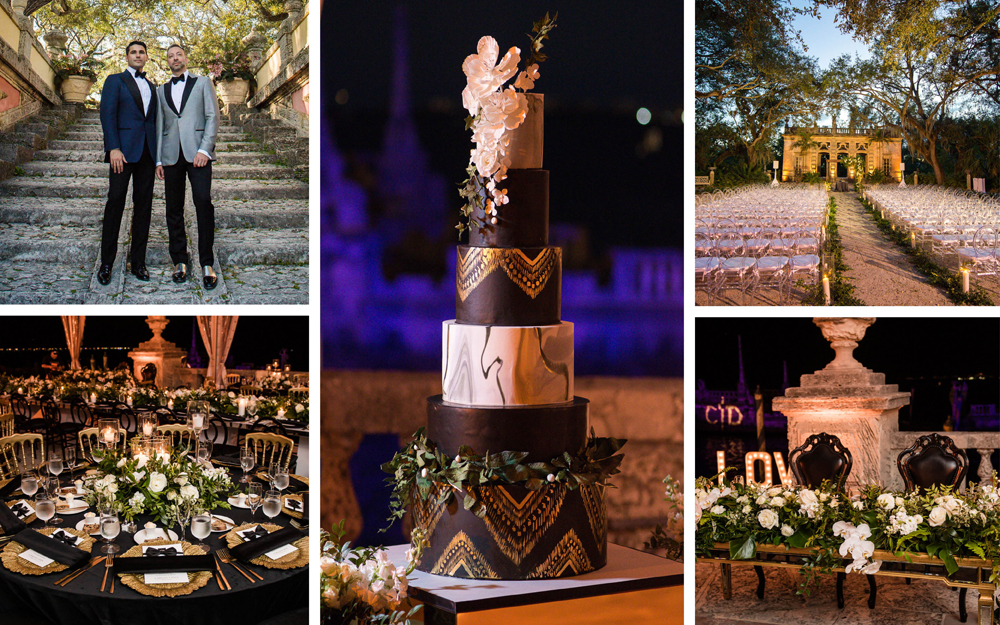 After becoming engaged in Saint Barths, Dan and Carlos began planning their Miami wedding, inviting 300 friends and family members to the event featuring a tropical, yet elegant, décor scheme. “Forget norms, traditions, and expectations,” confirms Carlos. “This is about the two of you – no one else.” Photos by Manolo Doreste Photographer; From Real Wedding: Alfresco Nighttime Ceremony and Ornate Tented Reception in Miami 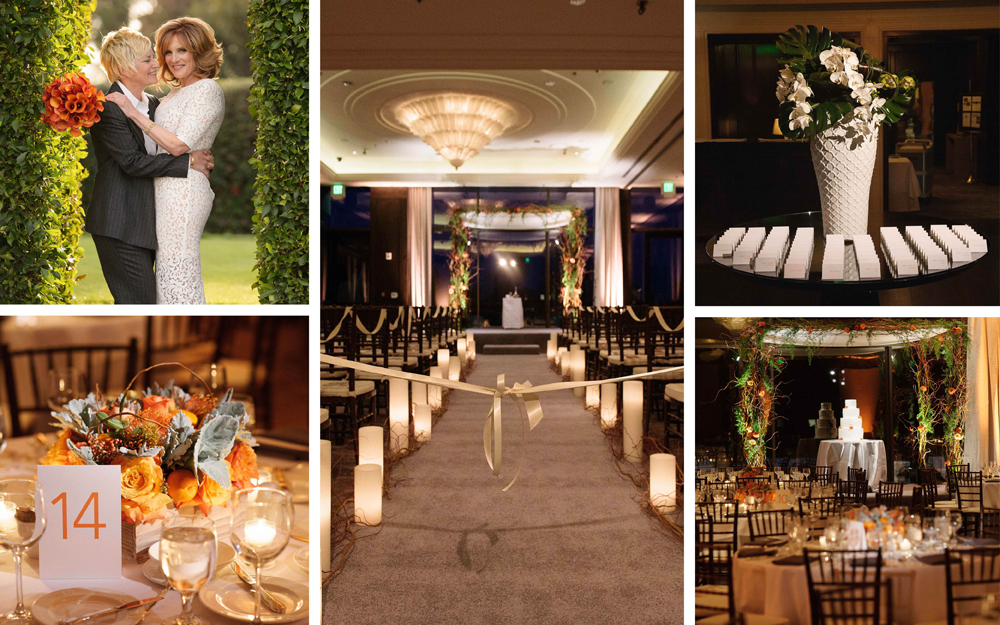 After nearly 20 years together, Carol – an Emmy-nominated comedy writer – and Lori were married in a personal ceremony featuring Jewish traditions, which was planned in just three months. It’s not a surprise that the celebration was full of amusement and laughter, considering the notable guest list of comedy legends. Larry David, Jay Leno, Jane Lynch, Bill Maher, Paul Reiser, Henry Winkler, and the beloved late Garry Shandling are among the friends in attendance. Photos by Next Exit Photography; From Real Wedding: Comedian Carol Leifer & Lori Wolf's Star-Studded California Wedding 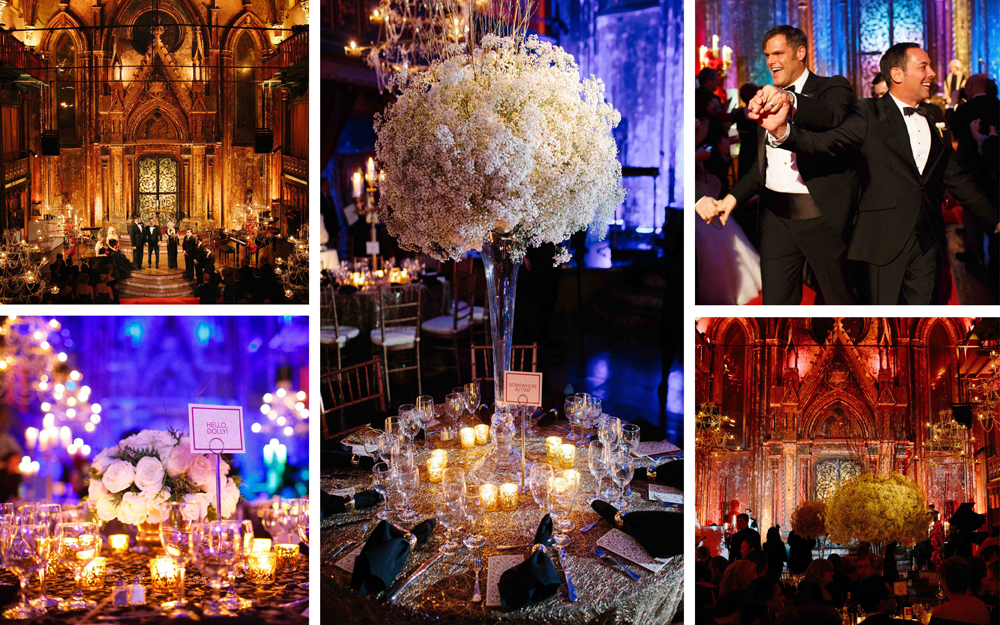 Just six months after their beachside proposal in California, bridal designer Matthew Christopher and his sweetheart David exchanged vows beneath a sprinkling of snow they had arranged to fall indoors in New York City. “We both love film, so our theme was a formal red-carpet wedding,” says Matthew, explaining that impressive special effects were therefore naturally to be expected. Photos by Gulnara Studio; From Real Wedding: Bridal Designer Matthew Christopher's Opulent Wedding

View more LGBTQ weddings, see an inspiring non-traditional wedding styled shoot to give you ideas for your big day, and view more planning and design advice for your nuptials here.

Get tips on how to look your best from a luxury wedding planner.

Get insider advice for summertime nuptials from a bridal designer.

On-Trend Embellishments for Your Wedding Dress

Should You Wear a Veil on Your Wedding Day?

9 Ways to Incorporate Laser-Cut Details Into Your Wedding Design