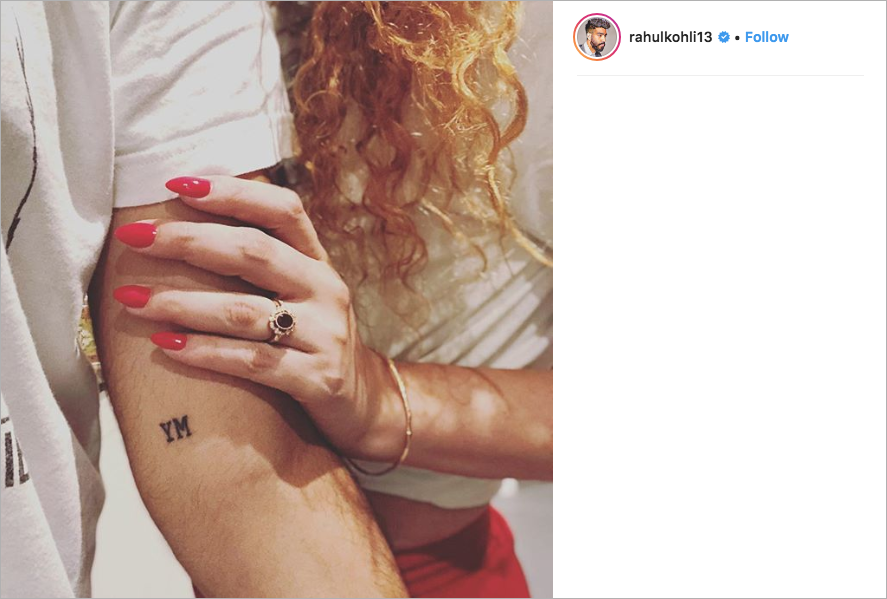 Another celebrity has popped the question! However, unlike Pete Davidson and Ariana Grande, or Justin Bieber and Hailey Baldwin, there was a lengthy courtship first. Rahul Kohli, who stars in iZombie, has proposed to his longtime girlfriend of nearly nine years, Yasmin Molloy. The British actor shared the news by simply posting a photo on his social media accounts with no caption. The photo is a close-up, showing her perfectly manicured left hand holding on to his arm, which has a small tattoo reading “YM” for his beloved’s initials. Yasmin’s ring is vintage-inspired, if not an actual antique piece. It’s set in yellow gold with a separated diamond halo. The center stone looks to be a deep-colored ruby.

The bride-to-be quote-tweeted the announcement with a joyful addition: “I guess I’m going to be his WIFE?!” On her Instagram account, she shared the photo with a similar caption, confirming the photo meant what everyone hoped it implied. The lovebirds got together long before Rahul started his acting career. As a result, they have spent the past several years in a long-distance relationship. Yasmin and Rahul are both from the UK, but iZombie films in Vancouver, and Rahul is often in Los Angeles for other work, such as Netflix’s original movie Happy Anniversary and frequent guest appearances on FunHaus – a popular YouTube channel focused on gaming. The actor is active on social media and frequently posts about his sweetheart, using both his trademark sardonic humor and sincere sentimentality, so the engagement news comes as no surprise to his fans.

12 Stories of How Grooms Asked Permission to Propose

These grooms' plans didn't go exactly as they expected!

"Propose" to Your Bridesmaids with These Items

What to include in your bridesmaid proposal gift box for your best ladies.

How to Handle Changing Into a Second Bridal Gown