Lea Michele got her happy ending! She and Zandy Reich were married over the weekend in an intimate ceremony in Northern California, reports People. Ryan Murphy, who created both Glee and Scream Queens starring Lea, officiated the nuptials and can be seen in an all-black ensemble in the photo the bride shared with the world. Her husband, on the other hand, donned a midnight-blue tuxedo with black lapels. Lea’s whole look is the epitome of a classic bride. Her ball gown is free of embellishments like beading or lace – instead the details are formed with soft pickups and draped fabric. A cathedral veil adorns her well-kempt low bun and even her bouquet is classic with a tight and round arrangement of white flowers. 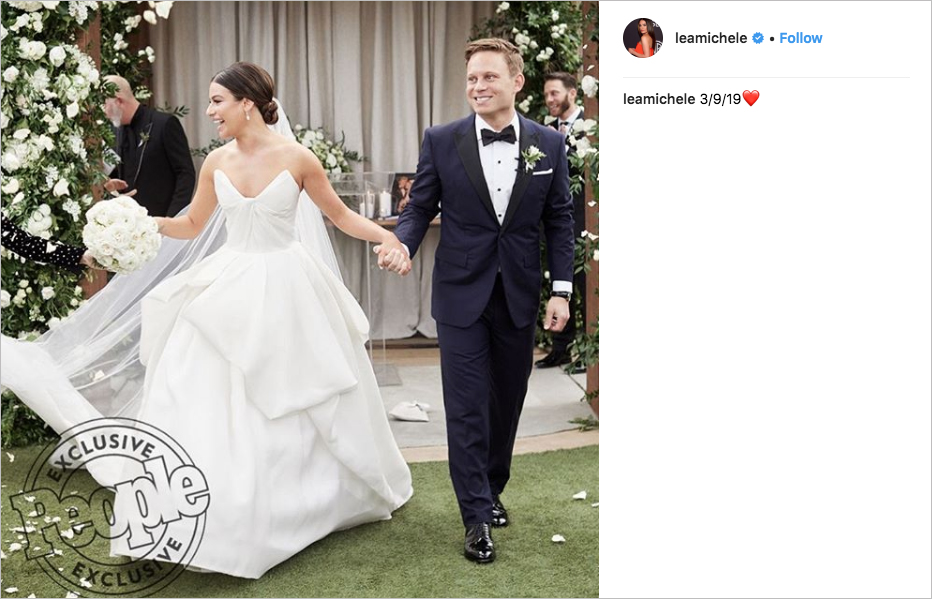 The couple seems to have included Jewish traditions in their ceremony – not much is known about Zandy’s background, as he is very private, but the father of the bride is of Jewish heritage. The sweethearts were married under a beautiful lush chuppah with wooden beams and an abundance of greenery and alabaster blossoms, including roses and hydrangeas. A bag for the breaking of the glass is seen in the background of the photos, as is an acrylic table with candles and family photos, in addition to another elegant floral arrangement.

Unsurprisingly, Lea’s former Glee costar and tour mate Darren Criss was in attendance. It was only a few short weeks ago that the friends celebrated his wedding to Mia Swier in New Orleans. Other friends and costars Becca Tobin and Emma Roberts were also present at the festivities.

Her new fiancé Zandy Reich presented her with a glamorous ring.

Lea Michele and Zandy Reich Had an Engagement Party!

Find out how she showcased her love of music.