Chances are, the soundtrack to your wedding day will include John Legend, Bruno Mars, and a whole lot of Ed Sheeran. Spotify analyzed 400,000 wedding-related playlists (not just the top 10 wedding songs you see all the time) and released the top 50 most popular songs globally to play on a couple's big day – ranging from common wedding songs that are perfect for first dance songs and other dance wedding songs that will keep guests dancing all night long. The number one pick and best wedding song: the romantic ballad "All of Me" by John Legend, which is an example of great songs to walk down the aisle to or marriage songs for playing throughout the celebration.

Although the list of wedding music favored contemporary hits, a number of classic tunes made the cut, including "You Are The Best Thing" by Ray LaMontagne, "At Last" by Etta James, and of course, "Can't Help Falling in Love" by Elvis Presley. Modern artist Bruno Mars was a popular choice, as was Jason Mraz, Beyoncé, and Pharrell Williams, while some country wedding songs as well as classic numbers – like "Endless Love" by Diana Ross and Lionel Richie as well as "Unchained Melody" by The Righteous Brothers – weren't included.

Take a listen to the wedding song ideas below – many of which are songs about marriage and perfect for a non-traditional walk down the aisle – and let us know if you are planning to dance to any of these wedding songs on the dance floor throughout your big day or choosing these songs to sing at a wedding celebration!

The Most Popular Wedding Songs

Whether you're putting together a "Best Wedding Songs" album or playlist, trying to put together a main wedding song list for your DJ, or looking for the top wedding songs – 2022 album songs or not – you'll love this list of the most popular wedding song ideas!

"All of Me" by John Legend

"Marry You" by Bruno Mars

"Thinking Out Loud" by Ed Sheeran

"A Thousand Years" by Christina Perri

"Ho Hey" by The Lumineers

"Marry Me" by Train

"I'm Yours" by Jason Mraz

"First Day of My Life" by Bright Eyes

"Let's Stay Together" by Al Green

"Everything" by Michael Bublé

"Best Day of My Life" by American Authors

"I Won't Give Up" by Jason Mraz

"At Last" by Etta James

"Better Together" by Jack Johnson

"Make You Feel My Love" by Adele

"I Wanna Dance with Somebody (Who Loves Me)" by Whitney Houston

"Just the Way You Are" by Bruno Mars

"Crazy in Love" by Beyoncé & Jay-Z

"Stuck On You" by Meiko

"Hey Ya!" by Outkast

"Single Ladies (Put a Ring on It)" by Beyoncé

"Marry Me" by Jason Derulo

"I Choose You" by Sara Bareilles

"Rather Be" by Clean Bandit & Jess Glynne

"You and I" by Ingrid Michaelson 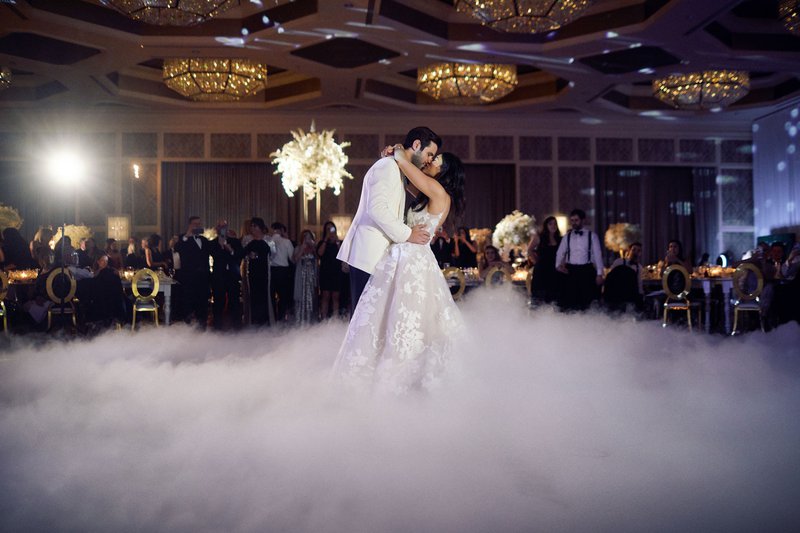 "Come Away with Me" by Norah Jones

"How Long Will I Love You" by Ellie Goulding

"Wake Me Up" by Avicii

"I Do" by Colbie Caillat

"The Luckiest" by Ben Folds

Opening photo by The Day; From Real Wedding: Dinosaur-Chic Celebration at the American Museum of Natural History

Which wedding bouquet style will you carry down the aisle?

From airfare to kitchen classics, discover what couples add to their registry.

From classics to modern-day favorites, see the tunes couples chose!

8 Amazing Ice Sculptures You Must See to Believe

Which Part of Wedding Planning Is the Most Stressful?