Be inspired by these traditional and unique tunes for your walk down the aisle.

When it comes to choosing the music for your wedding, much thought is placed into decisions for the first dance, mother-son dance, father-daughter dance, and even the entire reception playlist. What might get left on the back burner is the selection of songs for your wedding ceremony that will set the right mood for your event. While many brides choose to walk down the aisle to traditional classical songs, many other couples decide to go a more modern route. There isn't a right answer. You should ultimately select the songs that best represent your personalities and the formality of your event.

We looked to some of our real weddings to discover what real brides and grooms chose for their wedding processional songs in recent years. Some couples decided to walk down the aisle to the tried-and-true wedding music, while others had string trios or acoustic guitarists perform renditions of modern hits, and some brides and grooms chose their favorite tunes in all of their original glory. If you're worried about selecting a song for your walk down the aisle that may go out of style – but you still want ceremony music that is fresh and contemporary, choose modern tunes for the ceremony music as your parents, grandparents, bridesmaids, and groomsmen take their places at the altar, and have your bridal processional song be a more traditional track.

For some wedding processional song ideas, see what 17 real brides and grooms chose for their nuptials, below. These couples prove that "Here Comes the Bride" doesn't have to be your only choice! 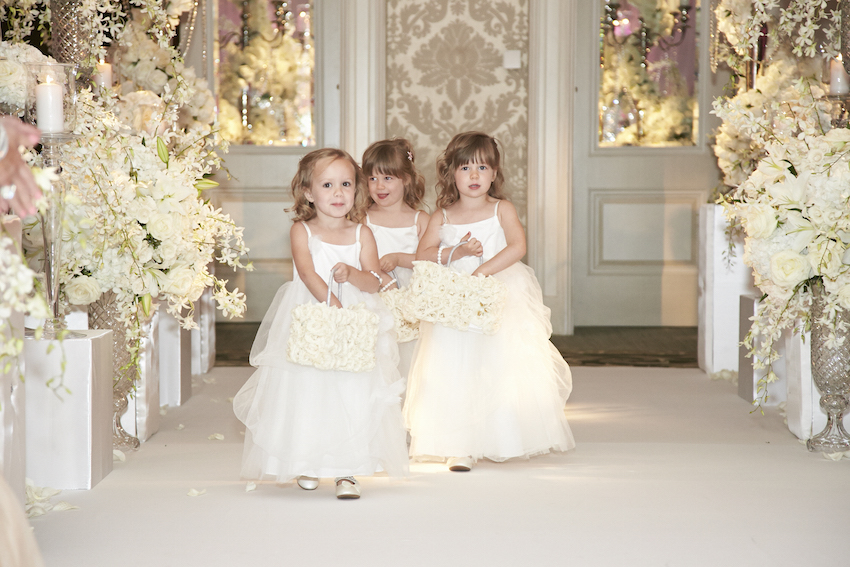 For this wedding, the couples' parents and grandparents walked down the aisle to "100 Years" by Five for Fighting, the bridal party walked to "You & Me" by Dave Matthews Band, the groom made guests laugh as he walked to "Back in Black" by AC/DC, and the bride glided down the aisle to "Always Be My Baby" by Mariah Carey. Photo by KingenSmith; Aisle Runner & Floral Design by HMR Designs 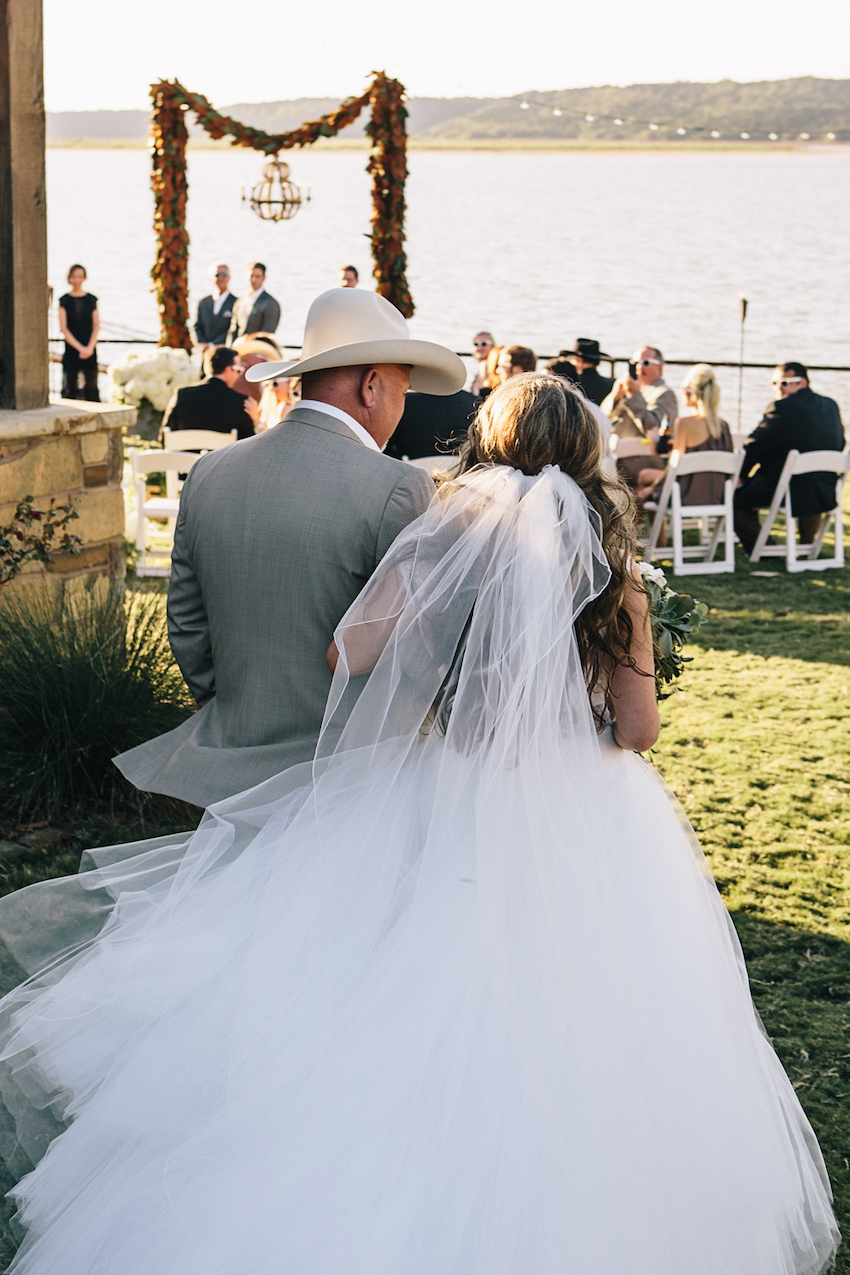 For this bride's Southern wedding, the bridal party walked down the aisle to "Landslide" by Stevie Nicks, and the bride to "When You Say Nothing At All," popularized by Keith Whitley and Alison Krauss. Photo by Vue Photography 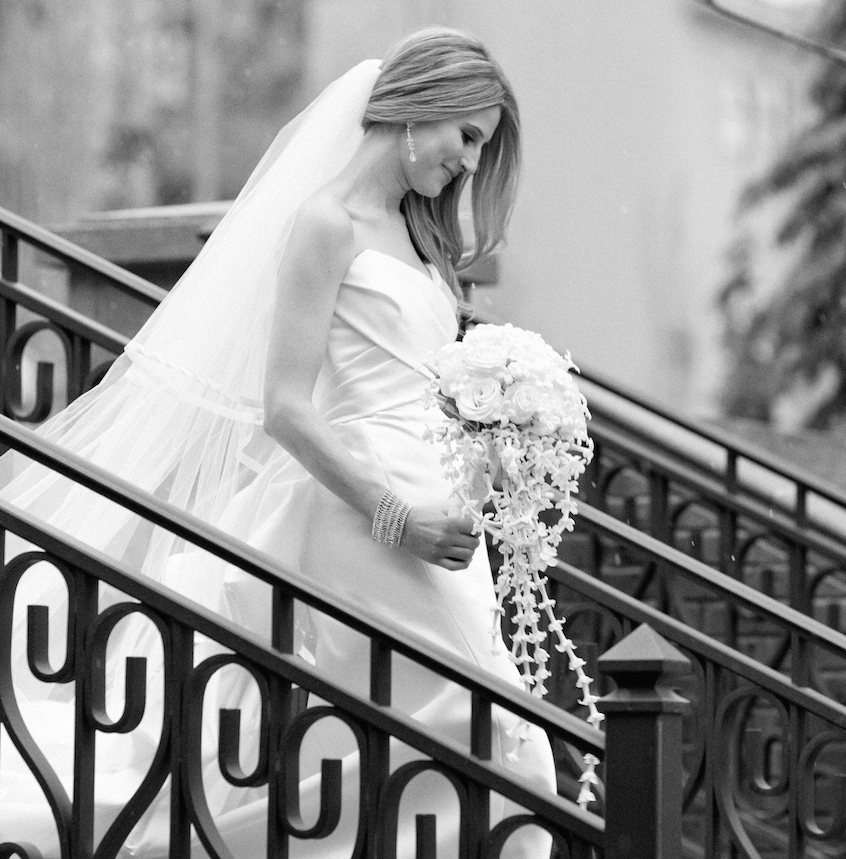 "We had a string quartet play contemporary music, including songs by John Mayer and The Beatles as guests found their seats. The bridal party walked in to 'Your Song' by Elton John and 'Forever Young' by Alphaville and Jay Z," shares the bride. "Joey walked in to 'Viva la Vida' by Coldplay, and I walked in to 'Sweet Child O' Mine' by Guns N' Roses." Photo by Aaron Delesie Photographer 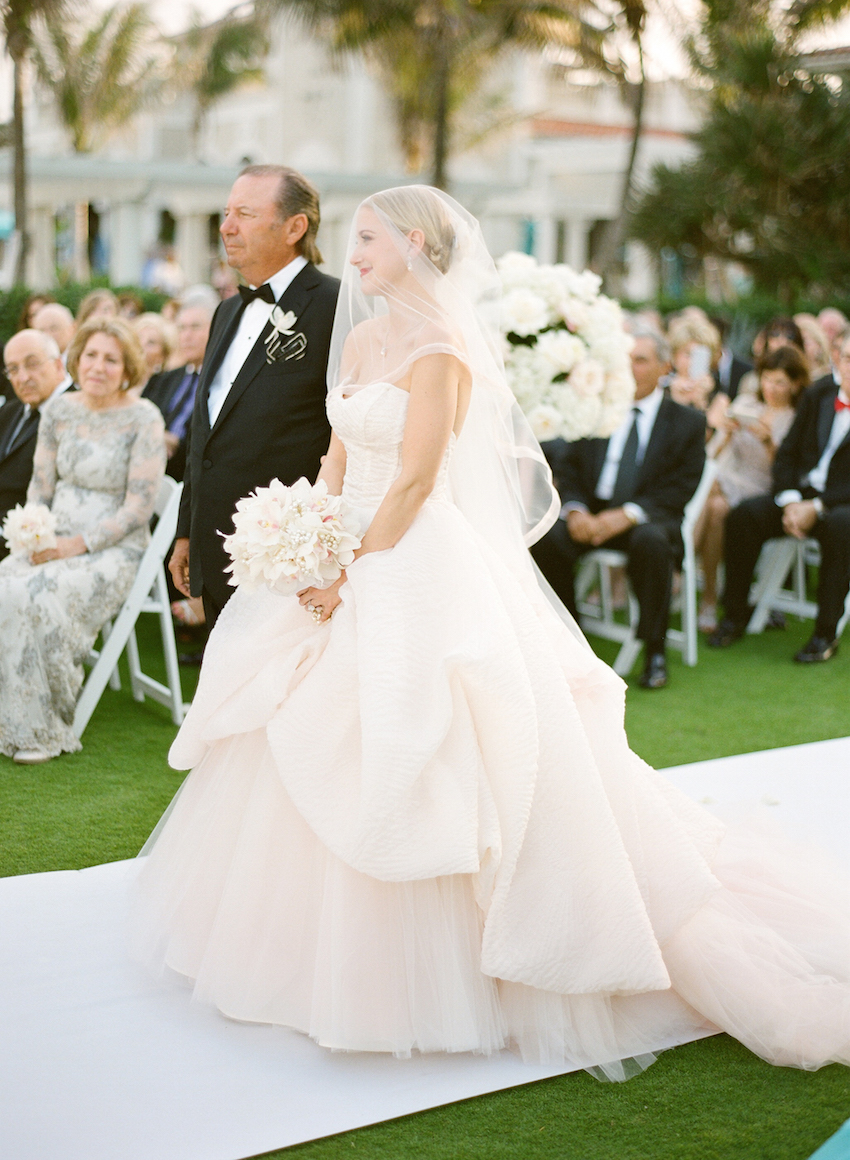 For this alfresco ceremony, family members walked down the aisle to "Can You Feel the Love Tonight" by Elton John and "Every Breath You Take" by The Police. Groomsmen sauntered down to "Stayin' Alive" by the Bee Gees and bridesmaids to "Just the Way You Are" by Bruno Mars. The bride's sister and maid of honor walked to "Stand By Me" by Ben E. King, flower girls and ring bearers to "All You Need Is Love" by The Beatles, and the bride with her father to another song by the famous band, "Here Comes the Sun." Photo by KT Merry Photography; Venue: The Breakers 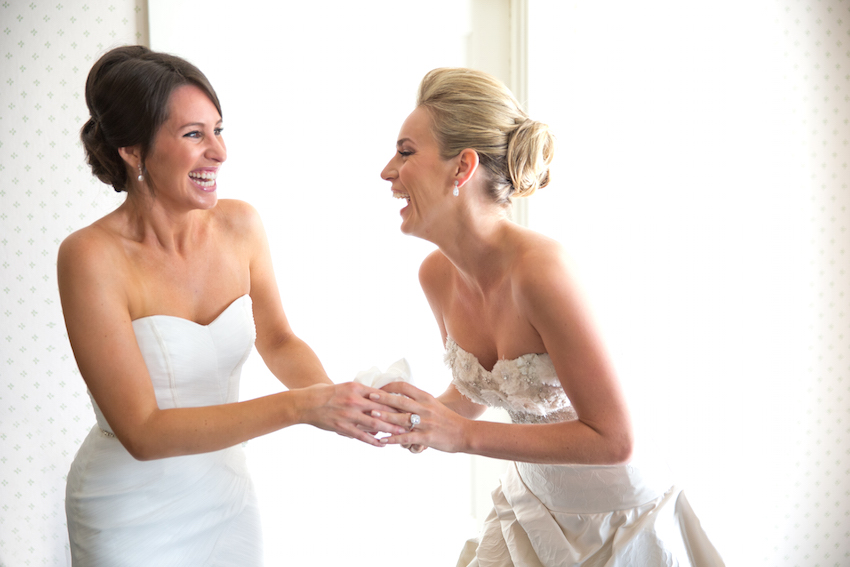 This bride's family walked down the aisle to a rendition of "Marry Me" by Train performed by a guitarist and vocalist, groomsmen walked to "Your Song" by Elton John, bridesmaids in white bridesmaid dresses walked down the aisle to "Over the Rainbow" performed by a small orchestra, and the bride walked in to the traditional "Canon in D." Photo by Aaron Delesie Photographer; Planning & Design by Mindy Weiss Party Consultants 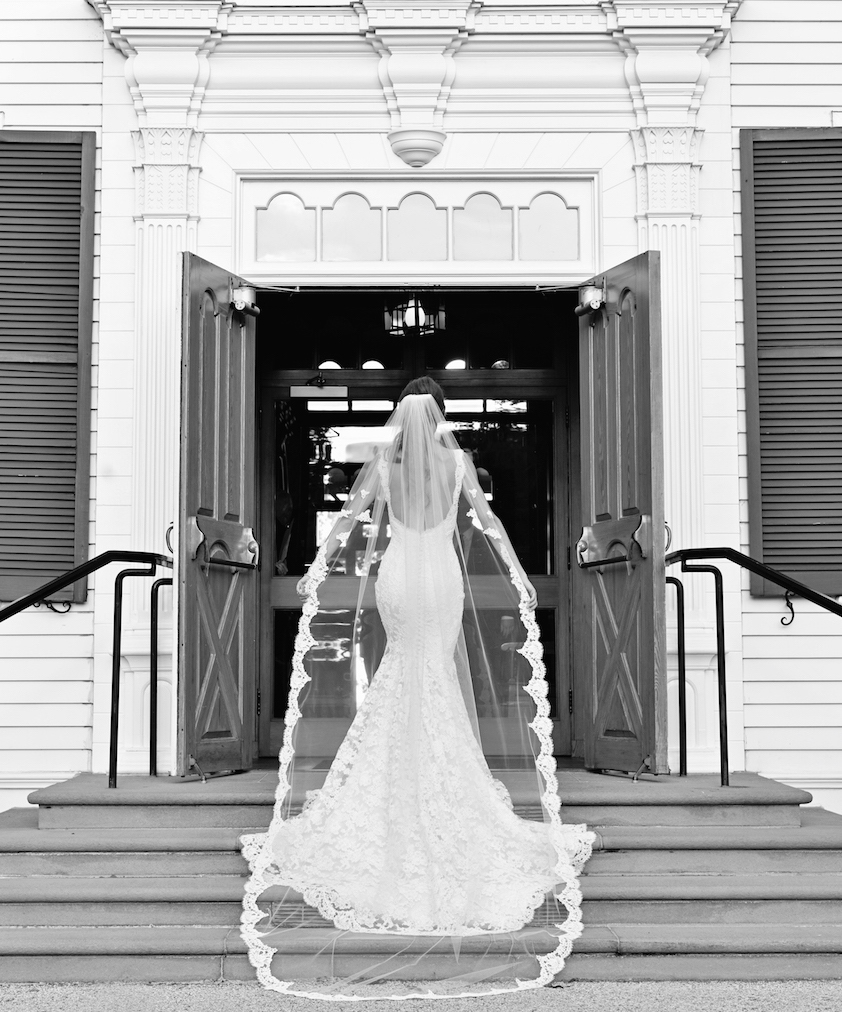 "A string quartet played on the bluff for the ceremony and welcomed our guests," shares the bride. "Crazy Love" by Van Morrison was selected for the prelude, and the song chosen for the bridal party processional was "This Will Be (An Everlasting Love)" by Natalie Cole. "Although we have a wide range of music taste, I went the traditional route and walked down the aisle to Pachelbel's 'Canon in D,'" she adds. Photo by Carasco Photography; Bridal gown by Ines Di Santo; Planning & Design by SQN Events 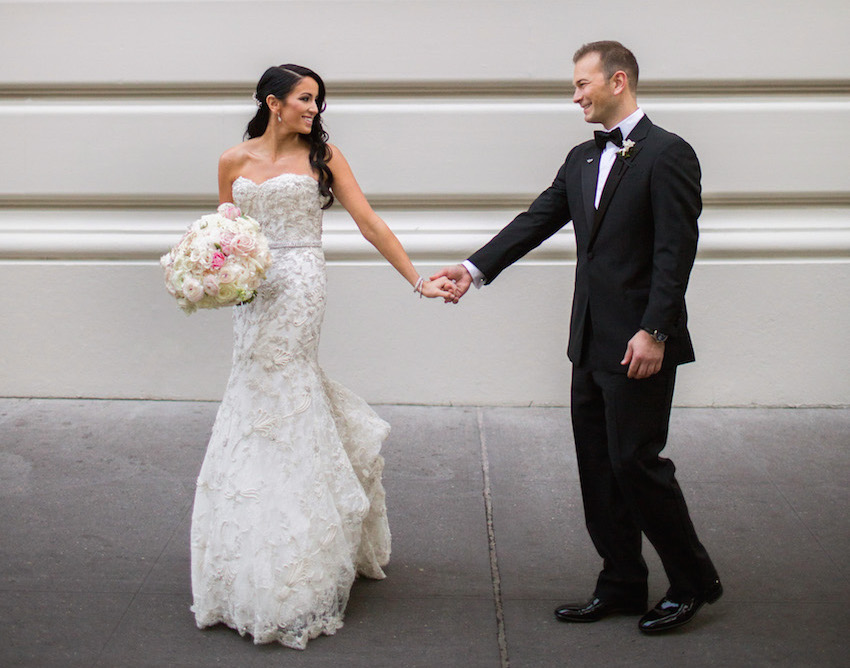 Following their First Look, Dana walked down the aisle with her parents to the sounds of their wedding song, "Til There Was You." Photo by Christian Oth Studio 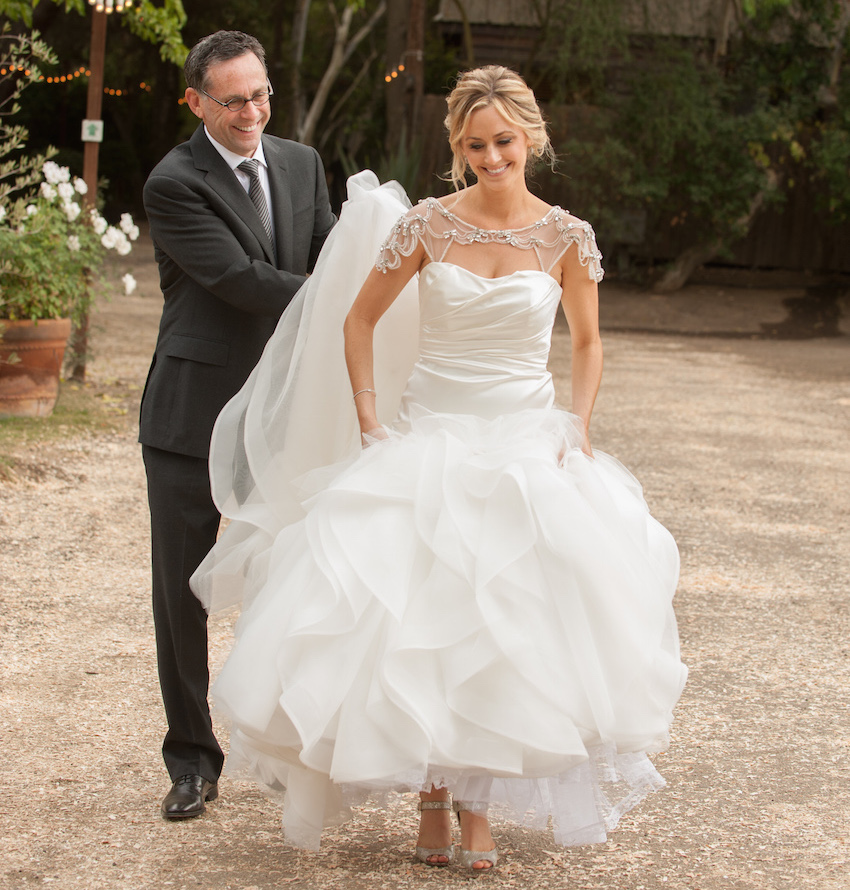 The bride, who was escorted down the aisle by her father, chose songs with her beloved that had meaning to them as a couple. "The bridal party walked down the aisle to an instrumental version of 'Take a Walk' by Passion Pit, which was playing when Fraser proposed," shares the bride. "I walked to 'She's Got a Way' by Billy Joel." Photo by Laurie Bailey Photography; Planning & Design by Linda Howard Events 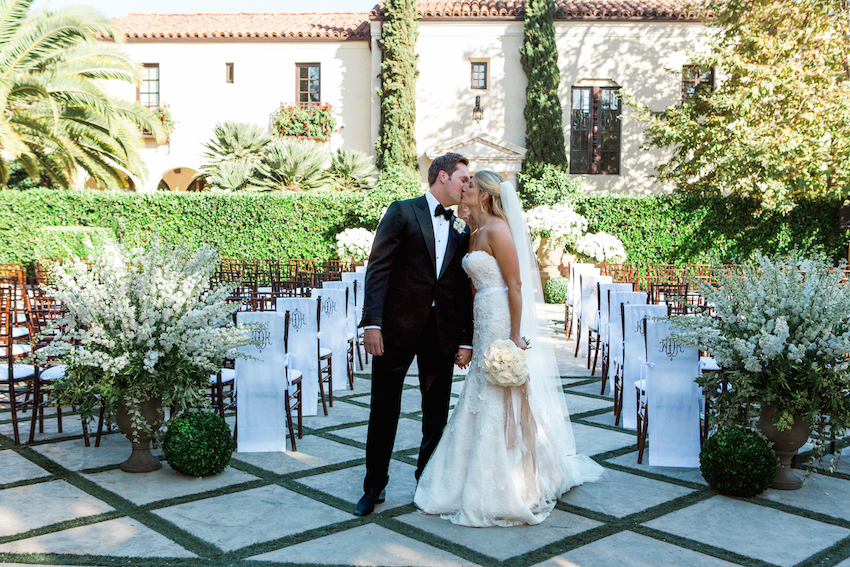 Since the bride and groom didn't want their ceremony music to be too formal, they included modern songs played by a string quartet: "Bittersweet Symphony" by The Verve for the processional as well as "Paradise" by Coldplay for the recessional. Photo by Yvette Roman 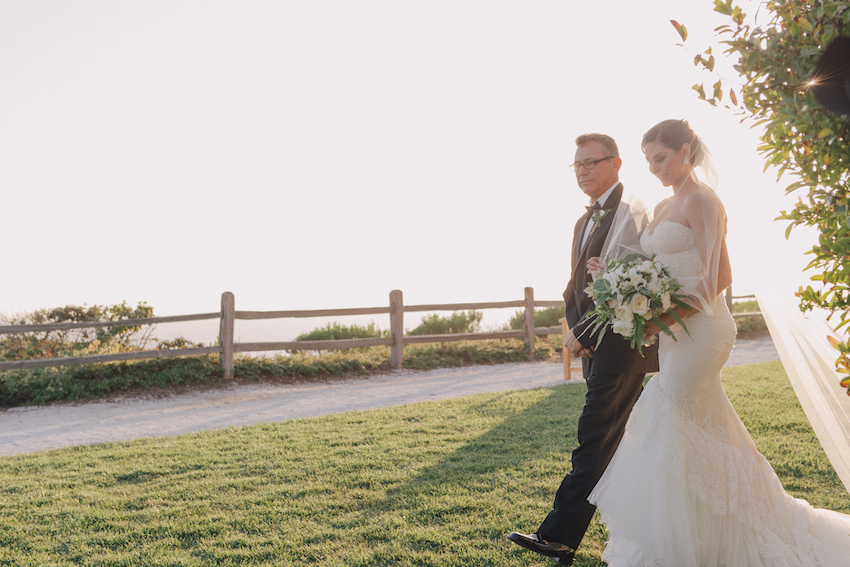 "Before I walked out, we played the Jaws title track to break the ice!" shares Backstreet Boys singer Nick Carter's bride, Lauren Kitt. Other songs in the processional soundtrack included tunes from Star Wars, Twilight, and the Legend of Zelda video game. Photo by Kris Kan 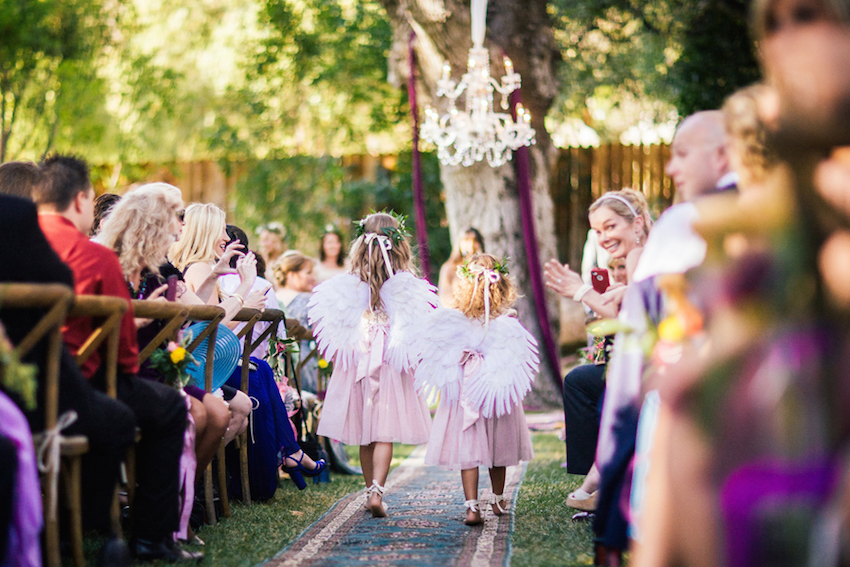 For this couple's boho-chic wedding, an instrumental version of "Wonderful Tonight" by Eric Clapton was played for the processional. Photo by Amanda McKinnon Photography 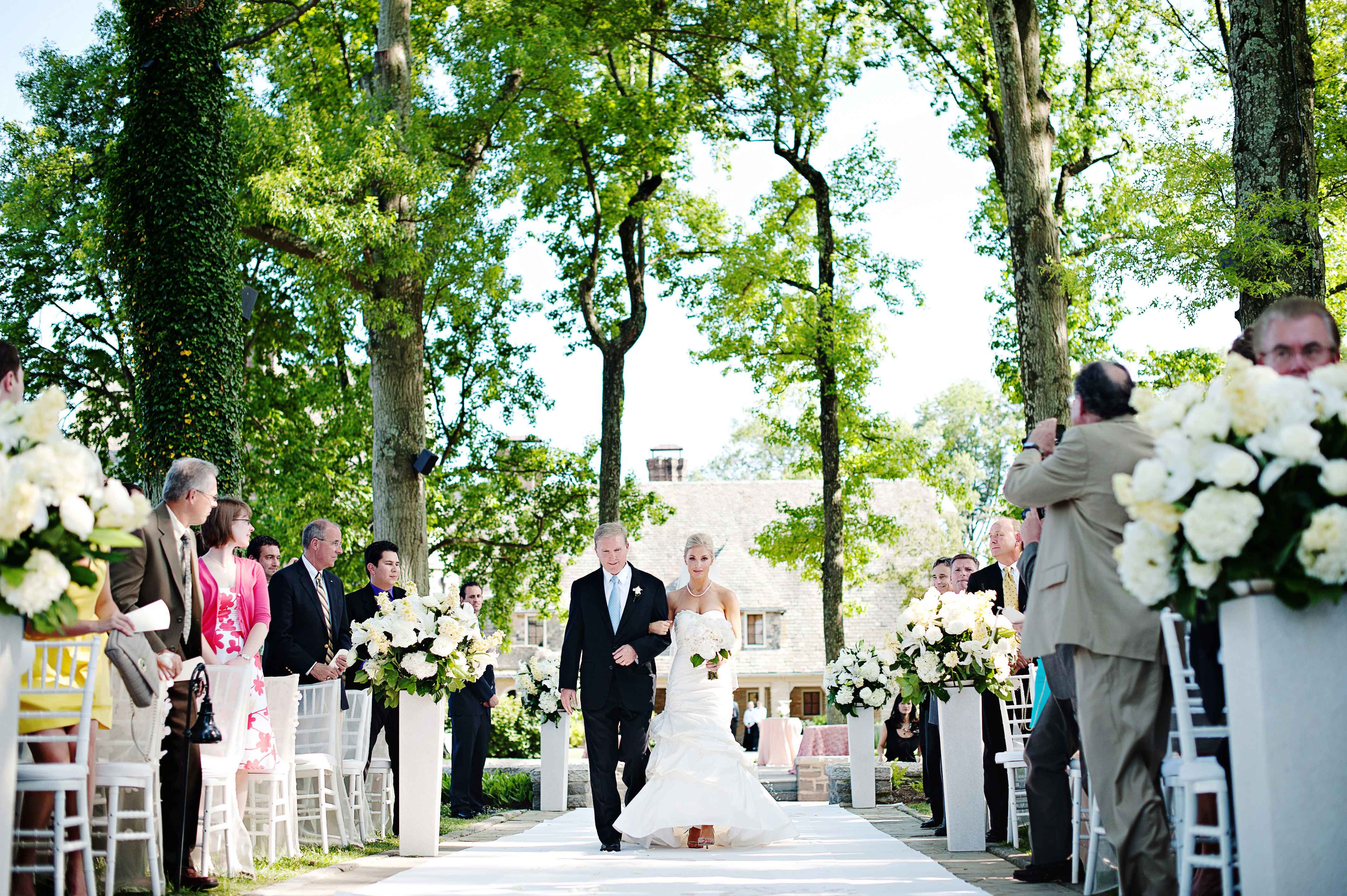 "I wanted the music to be personal, so I chose the song 'Marry Me' by Train to be performed for the processional," share the bride, who walked down the aisle on the arm of her father. Photo by Kortnee Kate; Aisle runner by The Original Runner Company; Consulting by Viva Bella Events 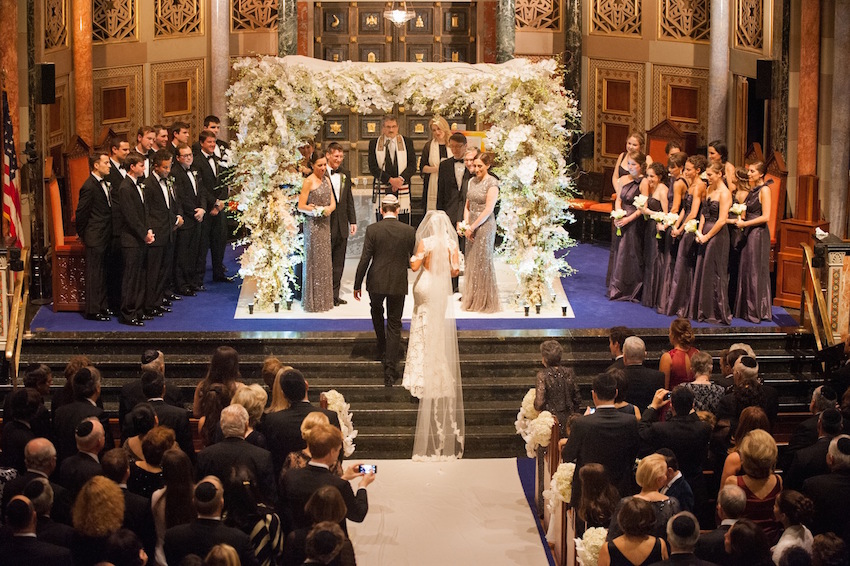 To complement the spirit of the reception venue – the American Museum of Natural History, the theme from Jurassic Park played for the bridal processional. On a more romantic note, the bride walked down the aisle to "Love Story" by Taylor Swift. Photo by The Day 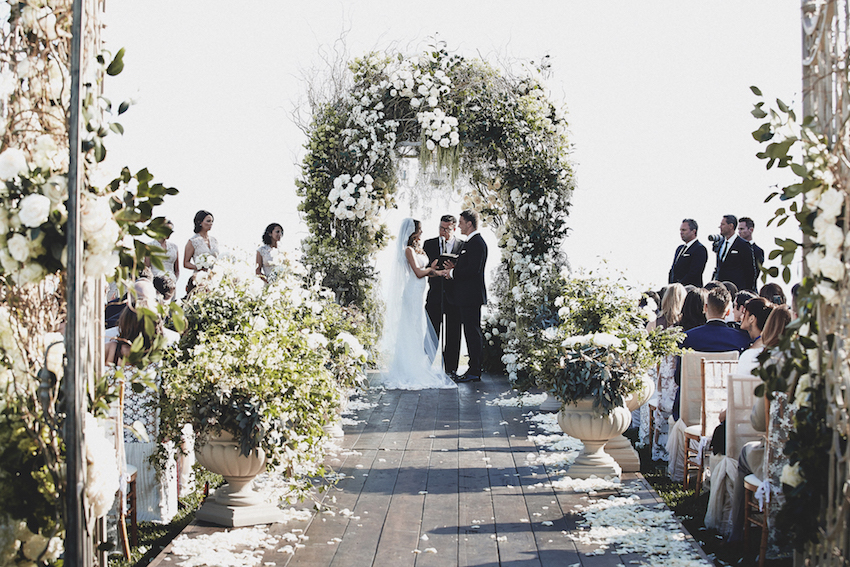 Brittney Palmer's bridesmaids walked down the aisle as a soloist performed "Here Comes the Sun" by The Beatles on a grand piano. The bride glided down the aisle to a rendition of "Breathe Me" by Sia before meeting her groom, Aaron Zalewski, at the altar. Photo by Daniel Kincaid Photography; Planning & Design by Bluebell Events; Rentals by Revelry Event Designers 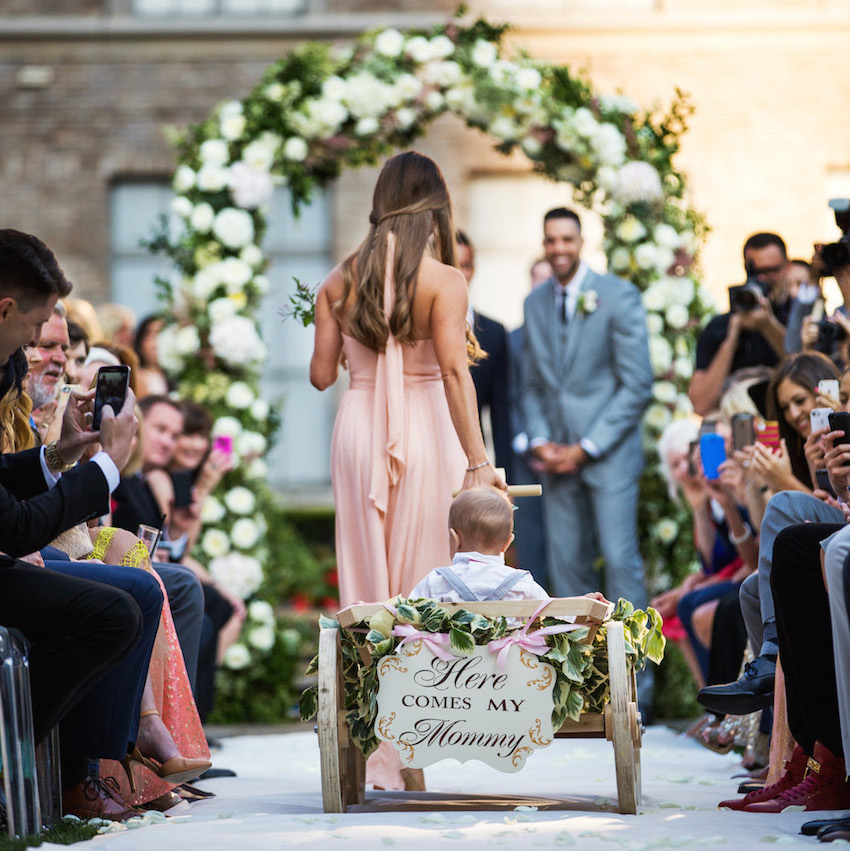 Bridesmaids preceded the bride down the aisle to the sounds of a string trio playing "Flightless Bird, American Mouth" by Iron & Wine, and Elaine followed to the strains of Leonard Cohen's "Hallelujah." "My son coming down the aisle in a wagon because he wasn't able to walk just yet is one of my favorite memories," shares basketball player Landry Fields of the emotional wedding processional. Photo by Christian Oth Studio 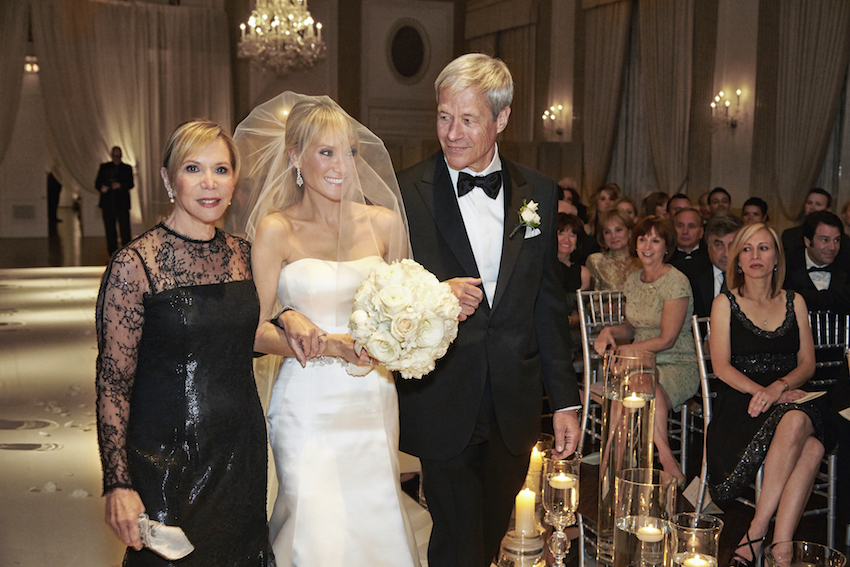 Processional songs included the Hawaiian version of "Somewhere Over the Rainbow" by Israel "IZ" Kamakawiwo'ole, "I Will (Love You Forever)" by The Beatles, and "I Will Be Here" by Steven Curtis Chapman. "It's probably one of the most beautiful love songs I have ever heard," shares the bride of the latter selection. "Bryan and I were at a wedding a couple of years ago, and it was sung at the ceremony. It gives me goose bumps." Photo by KingenSmith 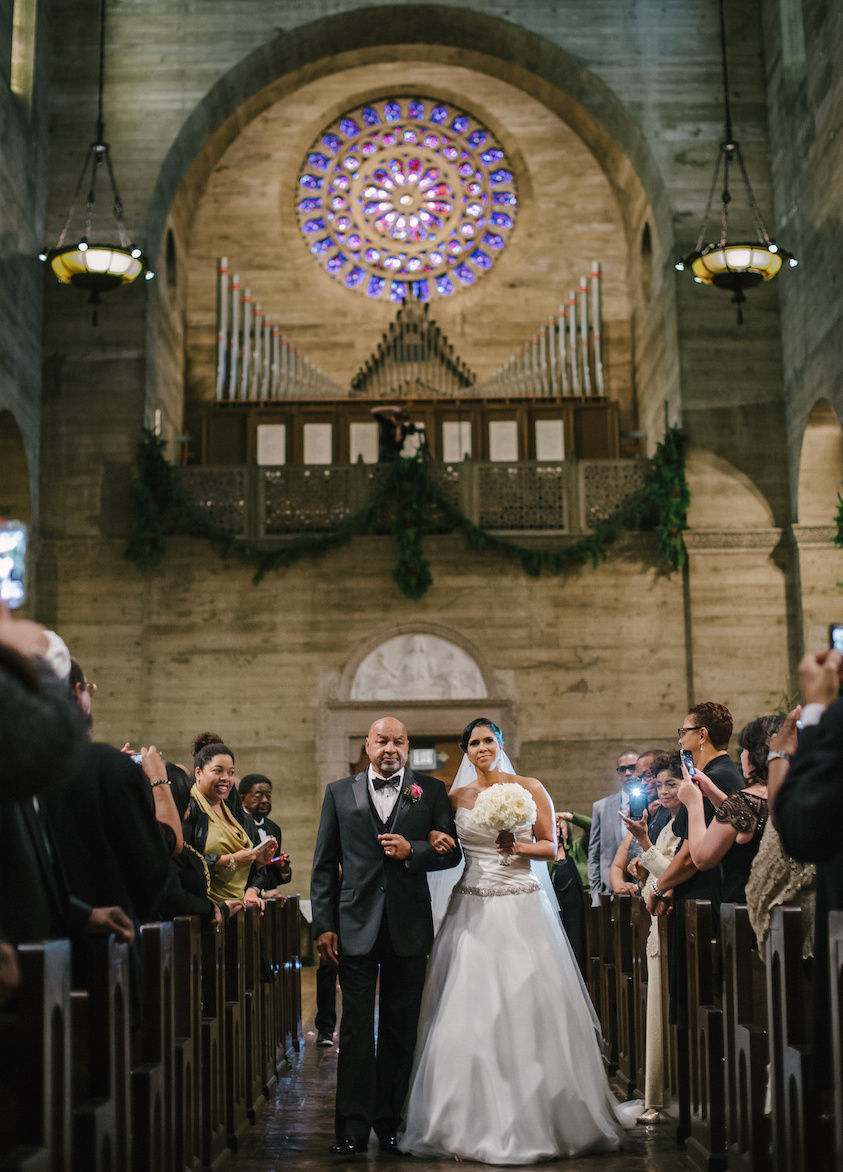 As Krystal was escorted down the aisle by her father, a singer performed a soulful rendition of "Never Felt This Way" by Alicia Keys. "It was beautiful, and I recall looking at the man I love and thinking this is perfect – this is amazing!" shares the bride. Photo by Amy & Stuart Photography; Consulting by Sterling Engagements

What songs are you considering for your wedding processional? Let us know in the comments!

Also, check out these unique songs for your walk down the aisle, and see what tunes other brides chose for their first dance and father-daughter dance. And be sure to see if your favorites made Spotify's list of 50 most popular wedding songs.