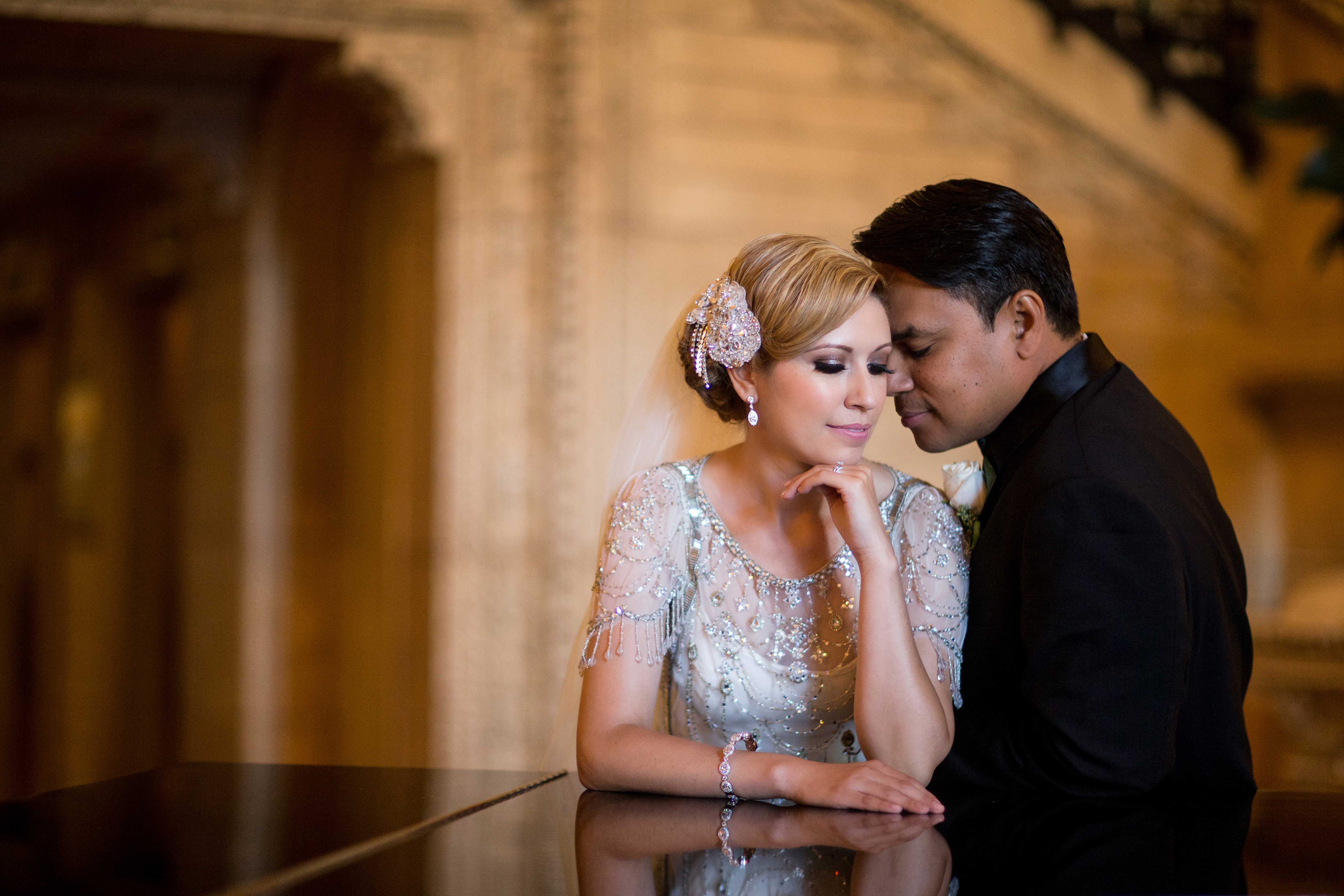 As our Throwback Thursday series draws to a close, we have the pleasure of taking a look at the last decade on our list: The Roaring Twenties. It was a time of frivolous prosperity, which, unfortunately, caused the stock market to crash in 1929. However, in the years leading up to the economic disaster, life was blissful. Depicted through popular literature of the time such as The Great Gatsby (1925) – as well as modern-day film adaptations of the book in 1974, 2000, and 2013 – and Chicago (2002), the era catalyzed the concept of a party atmosphere: skirts were shorter, music was livelier, and prohibition made underground clubs and speakeasies incredibly popular. Weddings during this time were fun affairs that incorporated all of the fashion and culture in the zeitgeist in the ‘20s.

Dresses: Bridal frocks of the Jazz Age were the epitome of footloose and fancy-free: like the casual dresses of the time, they were shorter, reflecting the popularity of the flapper girl look. Waistlines and necklines alike dropped significantly to represent the liberation of women’s fashion. Gown designs featured an eclectic array of beading, embroidery, and fabrics – a motif perfectly illustrated in the wedding ensemble of our 1920s style icon: actress, writer, director, and producer Mary Pickford. When she wed business partner and fellow star Douglas Fairbanks in 1920, she donned a unique dress which featured short sleeves with ruffled cuffs, ornate ribbon and illusion details, and an overall assorted vibe. Even with it being her second wedding after a divorce – a scandal when it involved your average couple, but a fairy tale come true for Mary and Douglas in the eyes of movie fans – she still showed off her young and playful personality.

Beauty & Accessories: Women getting married in the ‘20s were very particular when it came to their accoutrements. For example, Juliet Cap veils – a piece that covers the whole head en vogue in the 1920s due to its depiction on Juliet Capulet in original drawings of Shakespeare’s “Romeo and Juliet” – were must-haves during this time. If a bride wanted to forgo a veil, she typically sported a cloche hat, as covering one’s head was the chic thing to do for liberated women of the time, representing a more masculine style. Brides also wore long-strand necklaces, oftentimes pearls, layered around their neck. As for makeup, the name of the game was “anything goes.” The tradition of simply pinching one’s cheeks for beauty went out the window, and women began applying much heavier makeup. While concealer and foundation were often minimal, brides went for very bold eyes – using petroleum jelly mixed with coal to create eyeliner that covered the entire lid and lined the bottom lashes, establishing the original “smoky eye” look – and dramatic red lipstick that emphasized the top lip over the bottom.

Other Details: Brides carried huge bouquets and displayed short bob haircuts to counter the customs of yesteryear. The staple from which men’s fashion is now based was established in the 1920s: thicker suits made of wool or tweed that were a bit heavier than the ensembles of today, but lighter than suits had been prior, lapels that rested quite high on jackets, and a slimmer silhouette. For a brief moment, elopements and marriages by Justices of the Peace spiked in numbers – these died down significantly in the ‘30s and ‘40s. Everything about the bulk of this decade revolved around fun and prosperity. To quote from the song “Nowadays” from the film Chicago, in reference to this legendary era: “It’s good / Isn’t it grand? / Isn’t it great? / Isn’t it swell? / Isn’t it fun? / Isn’t it – nowadays?”